After finding out about that awesome Collector’s Edition of the Complete Greatest American Hero TV series on DVD a couple weeks ago I’ve really been in the mood to watch the show as I haven’t seen it in probably 20 years or so. I picked up the first season DVD’s and have been watching them all week so I thought I’d take a minute to take a look at the pilot movie for the series.

The show was the somewhat reluctant brainchild of Stephen J. Cannell (the uber writer/producer who brought us Hunter and 21 Jump Street) who said in the special features that the idea of doing a Super Hero show was pitched to him in a meeting, but that he wasn’t really interested at first. He kicked the idea around with some of his staffers and decided that it might make a fun show after all, but only if it was handled in a more down to earth manner so to speak. He wanted the main character to be an everyday Joe who gets his powers from his suit instead of just being imbued with power. He also wanted the characters to tackle smaller, more local problems instead of fighting for world peace against armies and the like (which is more of what the studio wanted to see.)

What I found really interesting after watching the pilot and the special features was how closely the show mirrored reality. For instance William Katt, who plays Ralph Hinkley, hated the suit just as much as the character did so in scenes where you see a pained expression on his face as he’s changing he isn’t acting. 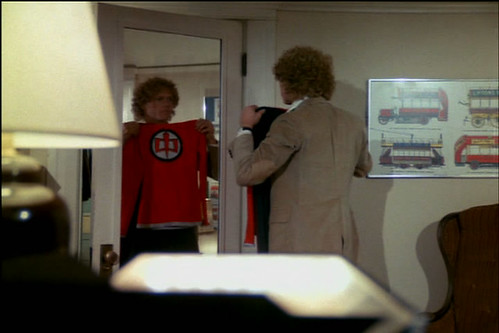 Also, according to Katt in the special features, he and Robert Culp (who plays the FBI agent Bill Maxwell) did not see eye to eye as actors and had a very similar dynamic on the show. I think it was brining real emotions into the show like this that really made it work and not come off as hokey as it probably should have.

It was also kind of interesting that even though this was a TV show with a much smaller budget than most of the movies being made at the time, Cannell was determined to try and keep the special effects at a level that was close to the Superman movies in terms of the character flying. They didn’t want to shoot Katt lying on a board like in the old Superman show, but to instead try and give him the greatest range of movement possible as Richard Donner did with Christopher Reeve. Though most of the shots are blue-screened in, which doesn’t hold up all that well to DVD picture quality, they were top notch for the day and pretty much unheard of in TV shows. 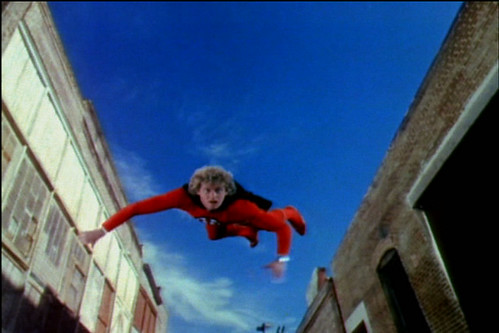 There’s also an awesome shot of a spaceship that lands in the desert to deliver to suit to Earth that would be right at home in Close Encounters. 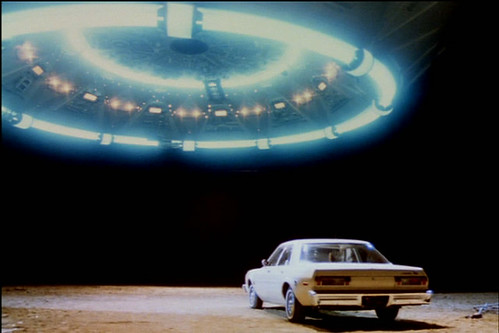 The pilot tries hard to not be straight forward and predictable, most notably because Ralph Hinkley doesn’t want the suit that’s given to him and he doesn’t get power hungry or brash. The story revolves around a plot by a terrorist organization trying to seize control of the presidency at the same time that a race of aliens (referred to as the "little green guys") descends to earth to award a suit to a person who shows great potential for honesty, caring and intelligence. Ralph Hinkley is a school teacher who is in charge of the Special Ed class (read problem children in the vein of the Sweathogs from Welcome Back Kotter) who meets up with FBI agent Bill Maxwell in the desert while on a field trip. 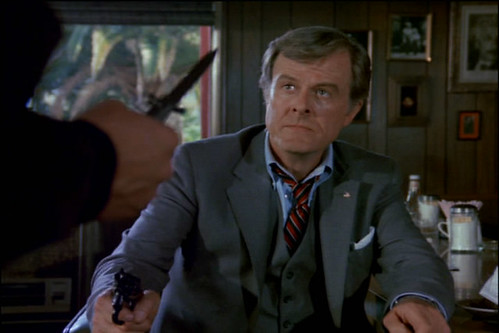 After being separated from the kids, Maxwell and Hinkley are buzzed by a UFO which informs them that they come in peace to give a gift which is delivered by the dead space-zombie ex-partner of Maxwell (who we first see in the pilot opening being killed by the above terrorist organization.) 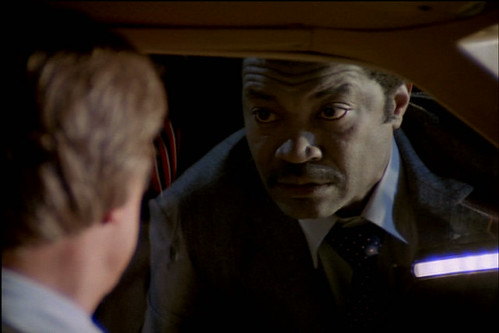 The UFO then flies off, leaving Maxwell and Hinkley to figure out how to use the suit. Maxwell ditches Hinkley in the desert where he promptly loses the instruction manual that came with the suit. 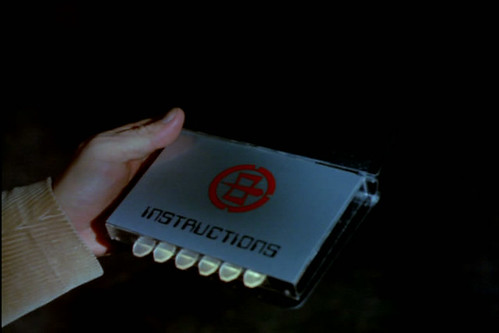 Another way that the pilot tries to differ from convention is with Hinkley’s girlfriend Pam Davidson (played by Connie Sellecca) who early on finds Ralph in the suit. Most shows would take this opportunity to set up a verycommon sitcom convention of having Ralph hiding his super powers from her which would put him in a number of compromising positions, and of course hilarity would ensue. Greatest American Hero side steps this and has Hinkley tell her about the suit and powers in this first episode which is a very non-super hero thing to do as seen in practically every comic book ever. Very quickly Pam, Ralph and Bill become a team. 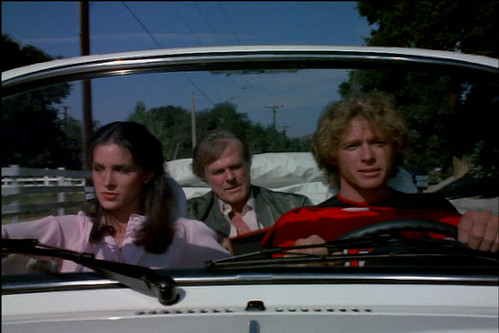 I also really dug how rich the back story of the characters was from scene one. Ralph, who’s trying to gain full custody of his son from his model ex-wife, is dating Pam, his lawyer in the case. He’s also already knee deep in problems dealing with his high school students, be it fist fights with Tony (played by Michael Pare of Eddie and the Cruisers fame) or carefully fighting off the advances of Rhonda (played by amazing Faye Grant who played Julie Parrish the rebel leader in the V mini series.) This is an approach that Cannell uses in all of his shows that really makes them interesting and watch-able even though they tend to have silly premises (I mean adult cops going undercover in high schools, c’mon.)

I also really like that the show centers on a very realistic approach to the character keeping things like where to change out of his clothes (gas station bathrooms) and how to master flying (by holding heavy objects to keep balance) in the forefront. 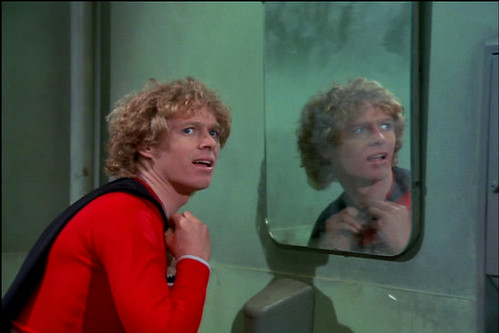 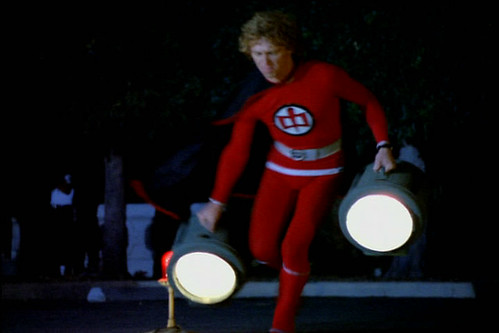 It’s also nice to know that Cannell knew his target audience was mainly kids, but he didn’t write the show down to them as much as other shows did. In fact the Greatest American Hero feels right at home next to shows like the Dukes of Hazzard, the A-Team, and Nightrider, all of which can just as easily be watched by adults as kids.

I think my favorite scene from the pilot is where Ralph has just put the suit on in public for the first time and is trying to fly to get to a custody hearing on time. He can’t quite get off the ground until a kid steps up and lets him know that he’s doing it all wrong, that he needs to take three big steps and then leap up like he would off a diving board. It only takes the wisdom of a child to get the Greatest American Hero up in the air. 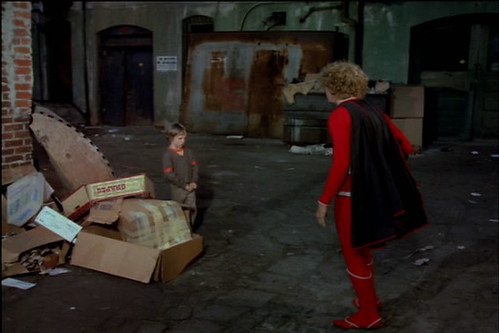