So as I mentioned in the last post, my favorite stuff for the Halloween blogging this year would probably be the various bits of Halloween on the cheap I’ve found in dollar stores and such. I was really surprised by how many different things you could get for a dollar.

I think over the next week I’ll cover a bunch of different Frankenstein’s monster related items that I picked up for a buck apiece. Though a growing love for the Creature might very soon beat him out, Frankenstein has always been my monster of choice not to mention one of my favorite movies ever, and this Halloween provided many opportunities to pick up cheap stuff with his likeness on it.

The first is an item I overlooked at the dollar store the first time I stopped in (I was much more preoccupied with finding the mini monster figures and posters that Kirk over at his Secret Fun Blog wrote about in September, and which I’ll talk about next week.) It’s a weird amalgamation of a leftover dollar store product ventures that the manufacturer decided to cobble together to make a super fun game out of. 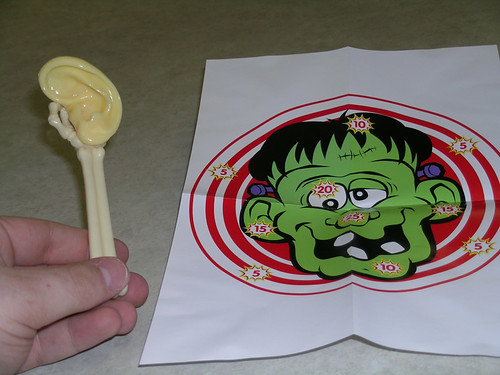 The game is a variation on darts (with a weird pin the human ear on a monster twist) where you use the provided mini plastic skeleton arm as a lacrosse stick to fling a gooey sticky severed human ear at a Frankenstein styled target board. 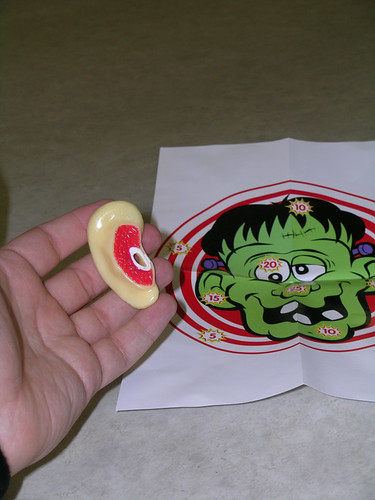 The ear that came with the set is probably the most impressive thing about it. It was hiding a rather gross bit of paint application on the back that freaked me out a little. I wasn’t expecting it to be that realistic with a meaty exposed bit where you can even see a little ring of cartilage. Mix this with is really sticky nature and you’ve got yourself a winner of a dollar store purchase. The plastic skeleton arm is kind of cool, though it’s molded in such a fashion that it’s pretty useless outside of this setting, unless you have need of a mini plastic skeleton arm that looks like it’s cupping something, which I don’t. 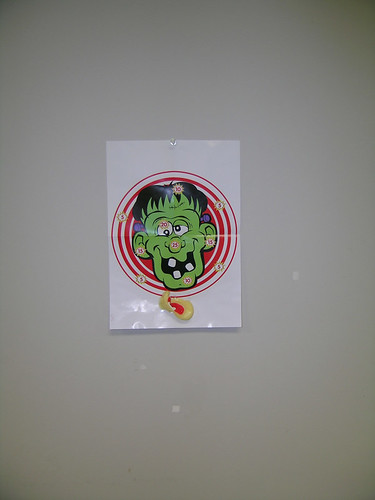 Well when I said "super fun" above what I meant to say was that it was super fun for about ten minutes before the main source of fun, the ear, got all dirty and dust covered from hitting the floor and ceiling tiles in my office. I never realized how dirty the floor was, but it’s all stuck to the ear now, so oh well. The game was actually not very fun as the target board is pretty small and it’s almost impossible to aim with the skeleton catapult arm thing, so I ended up ditching it in favor of just chucking the ear at various hard surfaces to see how misshapen it could get on impact.

At the end of the day the whole idea of flinging body parts at Frankenstein was just sort of weird to me. I mean were angry villagers so pissed that they’d rip their own ears off and throw them at the monster? Or was it more the case that the monster would rip their ears off, pretend to talk into them (ala Reservoir Dogs), and then drop them at which point the angry villager would pick their own ear back up and throw it at the monster? The latter falls into my theory of the Law of Severed Limbs (and ears or whatever) where upon having a limb torn from a body it must then be used as a club or projectile. I don’t know.