I’m going to switch back into Halloween gear this morning I think. I’ve sort of been running out of ideas of what to post about probably because I didn’t go into this with any sort of game plan. No focus I tell you. In fact it’s not until this late in the game that I think I’ve found some, but oh well. This year’s favorite moments so far have been finding and talking about some of the cheaper Halloween goodness I’ve found in local dollar stores and super markets. Today’s subject is by far my favorite, and it’s shaping up to be the best $3 I’ve ever spent on the holiday.

While rummaging around in my local Publix looking for decent chicken soup (coming down with a cold and I just want comfort food) I came across a new addition to their Halloween display (which was the weakest it’s ever been, just two feet of stuff on peg boards.) The product was simply called the Disguise Set and was described as “Fun for the whole family, Fun for girls and boys.�? 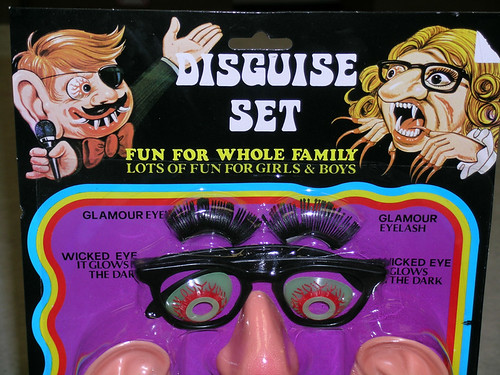 What caught my eye at first was the really cool packing art, two small paintings of a boy and girl covered in the disguise gear. It seems like anymore most packaging is either super slick with a lot of bad CG renderings or super simple, one color affairs with a very tiny silhouetted illustration or two, so this art really stood out to me. It sort of feels like it’s of a different era, and probably is, though I’m certainly no expert on stuff like this. 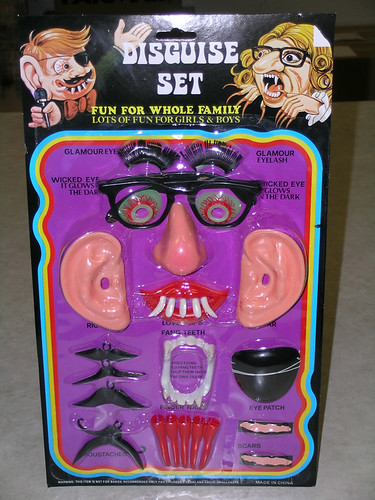 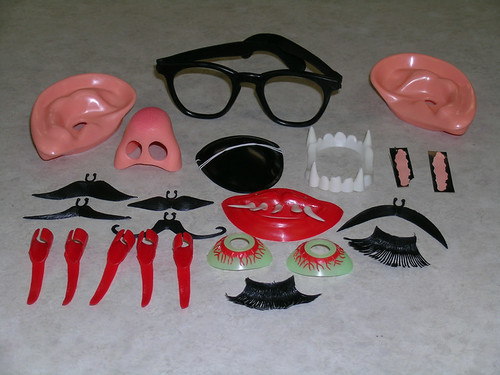 To tell the truth, I bought the set for the packaging more than the contents because I didn’t think most of the stuff would fit or work and honestly it just didn’t seem like that much of an impressive assortment. How wrong I was. After taking some pictures I cracked the packing open and sorted out the contents. I spent the next four hours making myself into so many different characters with completely different personalities that Lon Chaney gave me the thumbs up from the grave. For three dollars worth of plastic it sure as hell entertained me for a long time, and I even managed to scare the living crap out of my fiancée when I picked her up from work. I stuck the bulging glow in the dark bloodshot eyes in right before she opened the door to the car, made a Frankenstein growling noise as she got in and made her jump back out of the car with a very satisfying scream. My dog wasn’t nearly as impressed when I got home.

I took like six million pictures of myself in the various disguises, so instead of posting them here, I’ll give you a link (or you can click on that goofy looking bastard at the bottom) to a Flickr photoset for your perusal. 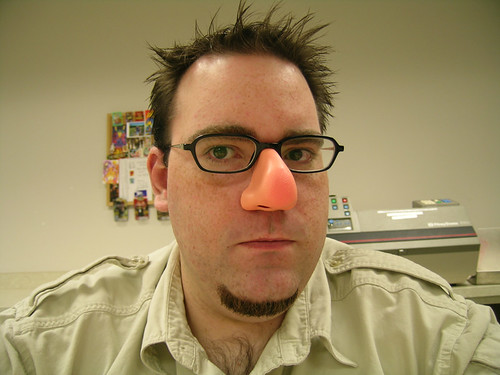