Sometime last year when I was shopping around for He-Man busts on Amazon.com I stumbled upon a book that looked pretty interesting, Mastering the Universe: He-Man and the Rise and Fall of a Billion Dollar Idea by Roger Sweet and David Wecker.  The blurb on the back of the book said that the book deals with the conception of the character and figure, including the office politics that influenced the development of the Masters of the Universe toy line, as well as the downfall of the line.  Cool.  I’d never really had the curtain pulled back on a toy line before.  I put it on my wish list and promptly forgot it was there until my parents picked it up for me on my birthday. 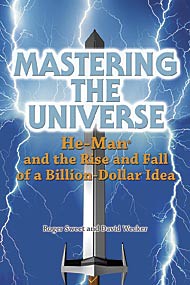 I just finished it and I’m not sure what I think.  Mainly Roger Sweet, a designer who put in 19 years at Mattel through the 70s and 80s mostly, and who claims to have created He-Man and the Masters of the Universe, wrote it.  I say claims because the entire book reads like a deposition in a court case where the creative rights to He-Man are in dispute.  And they aren’t, which made reading this book very painful and the facts presented suspect when I don’t even doubt that he created the toy line.  See the book is written in a very deceptive manner where the idea that there is a dispute as to whether or not Sweet is He-Man’s creator is taken for granted.  It’s not on either cover, and in the forward there is a brief bit that might foreshadow the dispute, but it’s certainly not clear.  In fact it’s not until the epilogue that Sweet makes this clear (well there is the preceding 200 pages of "he said, she said" that makes it abundantly clear, though it’s the why am I reading this that I am waiting for) where he states, "As I look back on the Masters of the Universe, and my relation to all of it, one point strikes me: No one at Mattel ever thanked me for originating the concept…"  This needed to be the fist line in the book, hands down, bar none, and all those other cliched phrases of emphasis.

Underneath all of the bitterness derived from that one idea, that he wasn’t thanked, there is a good story here, one that would make a great article, but not a great book, which is my other major beef with Mastering the Universe.  It’s a fairly short read that manages both omit a lot of what should be in the book like pictures, sketches and other people’s points of view (quotes, etc.) and yet be filled with a ton of redundant or off topic information.  For instance Sweet makes it a point to describe the physique of almost everyone he mentions in the book, including height, weight and build.  I mean does it matter if a woman working in his design group is 5’5" with a slender build?  He also repeats the description every single occurrence in this book at least once but sometimes two or three times.  I think he mentions the fact that in 1986 the MOTU toy line brought in 400 million dollars and then only 7 million the flowing year like four or five times and each time it’s written like it was the first.  The entire first chapter, which deals with Sweet mocking up three He-Man prototypes for a presentation, is almost repeated verbatim in chapter four.  At the end of the day the book feels like it was padded a bit too much.

As far as Sweet’s physical descriptions go, it’s actually one of the more revealing things in the book.  Both his co-author, David Wecker (Sweet’s nephew) and Sweet himself make it a point to illustrate how important a strong and healthy physique was to Sweet growing up.  He was a scrawny boy who was picked on by other boys and girls alike which prompted him to start a rigorous exercise routine that he’s kept with to this day.  Every time he mentions the development of He-Man, particularly the first three prototypes he goes to great pains to mention that he felt giant muscles and a "ready for action stance" are what were lacking in the field of boy’s action toys.  It gets to a point where it’s pretty clear that Sweet is semi-obsessed with muscles and apparently has little or no respect for weak or frail people.

Another thing that bugs me is how Sweet comes off very smug while arguing his creative rights.  Twice in illustrating how successful his designs were to Mattel he quotes the exact amount of a bonus he received for his work.  There are also numerous instances where he relates all the praise that was lavished on him by quoting memos or in what he remembers overhearing when others would speak of him.  I can completely understand where he’s coming from, in particular in an office environment where praise is often given by co-workers but never related to managers prompting that whole defensive "give credit where credit is due" mentality, but this doesn’t belong in a book that is only in his voice, it just comes off very smug.  He’s also fond of self-congratulatory boasts and remarks.  Here are two of my favorite examples: "…I came up with an unheard of innovation in model making…" and "In any case, It’s my humble opinion that the Dragon Walker is the most creative powered toy vehicle ever created."

Sweet also gets a lot of facts wrong in the book which doesn’t help support his cause all that much.  He repeatedly states that the 3.75 inch G.I. Joe figures were already on the market (and influencing his design) when he was developing He-Man, which is off by about two years with He-Man debuting first.  He also sites the Teenage Mutant Ninja Turtles as a factor in the downfall of He-Man during 1987, which is also a year or two off and not a factor in that years drop in profits.  The thing that hits home the most is the factual errors in the actual MOTU line.  He takes the time to describe a bunch of the figures in detail citing how creative the design was, yet gets a couple wrong.  He describes Webstor as having a string going through his head and coming out his hind quarters when he simply had a back pack with a string running through it, while he describes Kobra Kahn as having a detachable head that you filled with water that would act as a squirt gun, when in fact you filled his body with water and the head only detached to allow the body to be filled.  I know these are minor fanboy quibbles, but when he’s trying to win over an audience of readers to the facts that his designs were so clever he should probably get them right.  It also doesn’t help that he dedicates an entire chapter to the very crib notes version of the development of boys figural toys over the last two hundred years, that in the end just makes him seem like he’s trying to be more knowledgeable on a subject than he really is.

I also found that as a whole the entire book was very manipulative in the way it described events.  In one paragraph Sweet would mention how during the first year He-Man was in production is was projected to make only 7 million dollars in profit, but ended up making 38 million and it seems that he is attributing this success to himself and his initial creative design.  Then in another paragraph he mentions how he wasn’t involved past the initial inception of the design, that another team took over the work on the first year run (which he repetitively says was uninspired) and that, that first year’s profits (the same 38 million mind you) was pretty darn weak.  This goes on all throughout the book.  In one paragraph he talks about how uninspired the first wave was, then in the next he’s talking about how creative it was to repaint a basic He-Man figure blue and orange, slap on Skeletor’s armor, and then to call the figure a robot.  That is pretty darn lame and isn’t creative at all (though it is genius from a corporate "get ’em to buy the same figure twice" standpoint.)

He also pretty much lambastes the Filmation cartoon, going so far as to site them for creating new characters for the show, then charging Mattel a licensing fees to make action figures of them (when they are paying licensing fees in the beginning to make the cartoon at all.)  He states how he detests the concept of "Prince Adam", that it demeans the character of He-Man (though he goes to pains to make sure that everyone knows that before the cartoon came out he originated the idea of a character magically transforming from scrawny to muscled hero in a numbered internal Mattel document.)  He also gives the show little credit for monumentally affecting the profits of the toys after it began airing.  Well, he does mention it, though he makes sure to state that it’s was his designs that made the toys so profitable, when it’s clearly the show being broadcast into millions of homes on a daily basis that makes more sense.

The last nail in the coffin for me is that in the epilogue he repeatedly states that though He-Man was a "wild roller coaster ride", it’s certainly not the most satisfying or memorable moment is his career or life (those honors go to working on both the Boeing 747 cabin and Downey fabric softener bottle designs), yet he put forth the effort to write this bitter memoir dedicated to making sure everyone knows who created He-Man.  I think it might be safer next time if I refrain from pulling back the curtain on a beloved childhood memory.

Let’s put it this way: I fought for the South. We lost.