Creature on the loose!

Last night I did some quick research on Hot Wheels and Matchbox die-cast cars and I was surprised to find out that Mattel Inc. owns both brands. Has this always been the case? I mean there is a very obvious difference in quality between the two products and neither really has anything different to offer. Well the Hot Wheels brand doesn’t have any cars or trucks that come with nifty plastic monsters, but they do make cars shaped like nifty plastic monsters. Their price points aren’t even different at around a buck apiece. I don’t know. Maybe it’s just more of the same thing that large corporations do when they buy out the competition yet keep the branding in place for people like me who tend to be brand loyalists.

Anyway, today we’re taking a look at my favorite combo in the monster/vehicle line that Matchbox has out right now, a toy that I was very surprised to find. It’s basically the Creature From the Black Lagoon and a kick-ass van that harkens back to the one the A-Team used to liberate the downtrodden the world ‘round. 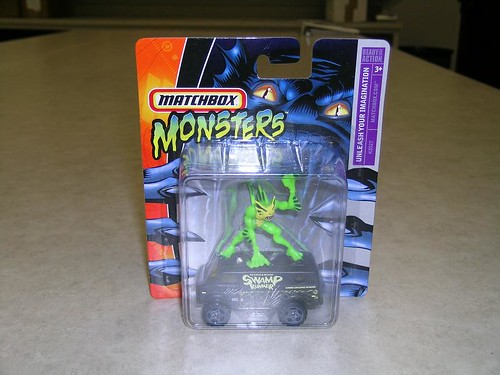 Since these aren’t marketed with official names (the packaging just says “Unleash Your Imagination�? and “Monsters�?) I guess this could be the gill-man/Creature or just as easily a Chupacabra. Either way it’s pretty darn cool and has a surprisingly decent amount of paint application that makes him all that much cooler. The van he comes with, the Swamp Runner, is also pretty bad-ass with huge wheels and a fun amount of olive drab accenting. This is one Matchbox car I can really get behind. 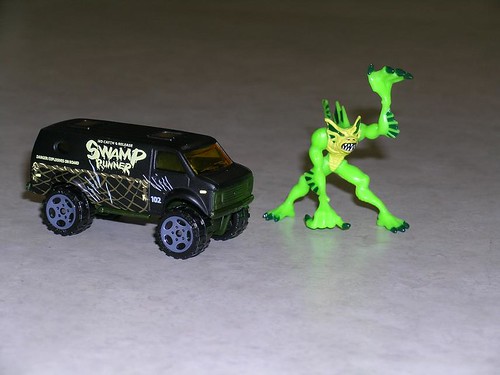 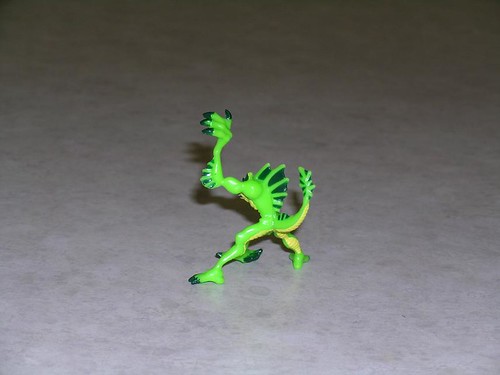 This combo also comes in a larger set that also has a trailer rig to the van, and two little plastic guys, a movie cameraman and a little Tarzan looking dude with a trident (?), but the creature figure that comes with it isn’t painted and ends up looking too neon green. Over all I am really happy with this slimmed down set and a new creature to add to my very slowly growing collection. 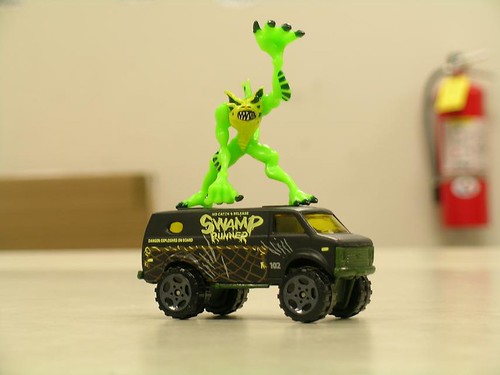 There are four monsters in this series, the abominable snowman I shared yesterday, a giant squid, a T-Rex skeleton (which is pretty lame, I mean T-Rex skeletons aren’t very animate and not all that scary in terms of monsters and stuff), and a grizzly bear that I mistook for sasquatch, which would have been worlds cooler. There’s also an expanded set that has a neat Mummy, though it’s a lot smaller than the creature and snowman figures and not nearly worth the $5 asking price, and two super deluxe $20 sets that have either a mega giant snowman or Mummy for your Matchbox cars to fight and ultimately run from because that’s was toy cars do they drive.

I hope they come out with a second series because I’d love to see some more cryptozoology creatures brought to life in little plastic molds. Can’t you just see the Nessie play-set complete with little plastic lamb and a rickety old boat? How about an ogopogo? What about space creatures! I mean aren’t we supposed to be releasing our imaginations here?  Oh wait, they do have a Space Creature set.  Why isn’t it at a store near me!?!

There’s only one solution to the newest League assignment, The Peanut Butter Solution!

I would have waited an eternity for this…DVD review…