So yesterday when I was out at lunch I decided to hit my local basic American food style buffet place because you can take out by the pound and so my lunch ends up only costing like $2 instead of $8 like what most of the places around here charge. One of the things I love about this buffet place is that they have a claw machine in the lobby area that’s well stocked, which I believe is the secret to mastering claw machine techniques. I never really came across claw machines until the last 10 years or so. None of the arcades where I grew up in Florida ever had them, or any of the Chuck E. Cheese or Showbiz Pizza places for that matter.

Well when I stopped in I was hoping they had loaded it with plenty of Halloween goodness but there was pretty slim-pickens in the seasonal department. As I was about to leave I saw something out of the corner of my eye that got me excited. There was a Homer Simpson plush in a black leotard with a skeleton painted on it, just like Johnny and the rest of the Cobra Kai wore to the school dance in the first Karate Kid. Holy crap I wanted that doll. I checked my pockets and came up with six quarters. Three shots at winning what must be the best claw machine prize ever (well until the next time I see one with Pac Man ghosts, but that’s a story for another time.)

I plunked in my first two quarters and checked his position, on his side, on top of a heap of Care Bear knock offs, primed for the claw. I took my shot and of course I missed getting him. Grabbed him around the head. That’s a beginners mistake as any seasoned claw machine junkie will know that all the weight is in the torso and you need a good balance to snag the prize. Plunked in my next two quarters. I had him this time. The claw picked him up under his arms, but he was on his side and he was just slim enough to fall halfway to the prize shoot. Crap, though he did fall on his stomach this time making for a wider target. Only two quarters left. Some where in the back of my mind I knew I’d get more quarters after I paid for lunch, but none the less I was done to the wire. I needed to prove my mettle or some such non-sense. I wanted that Cobra Kai Homer figure. I shot my last two quarters into the machine and positioned the claw so it would grab him under his arms again. The claw grabbed him, picked him up and as it reeled back in it shook for a moment. But only a second, and then it was whisked toward the prize shoot and this time he stuck. Winner! He is mine, all mine. I had to carry him around as I scouted the buffet for lunch, but it was worth the weird stares from all the uptight business people and off duty cops (who freaking flock to this place.) I was triumphant. 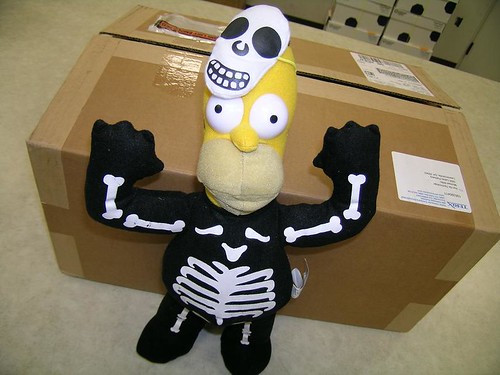 Even though his mask doesn’t really fit him, I don’t care, ‘cause unless Mr. Miyagi’s stunt double leaps over a fence to save the day, my Homer can kick the living crap out of Ralph Macchio any day. 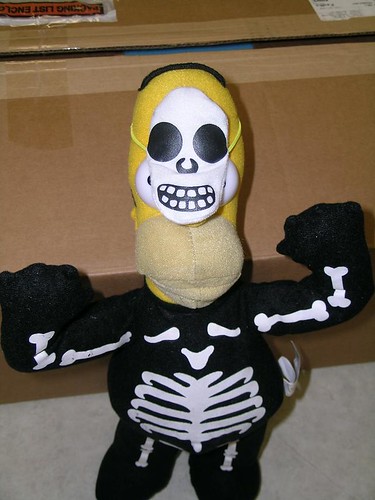 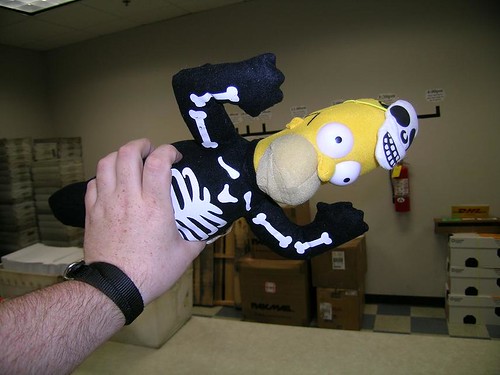 A model car that is begging to be busted up!

On Target for a good Halloween shopping experience…