Let me give ya a hand…

So even though I’ve started a little early with the gratuitous Halloween blogging, here is the first October entry in my month long look at all things creepy, crawly, scary, and just plain fun.

Today’s item is something I’ve pined for, for over 20 years (a common thread in this blog) ever since I saw one in an ad in the back of Fangoria magazine (see this entry.) Well not exactly that past entry, but that was the same company and type of ad. See, ever since I was a little kid I’ve had this weird fascination with gore and the latex equivalent. It started when I’d go to the mall with my mom during the Halloween season and we’d inevitably end up in Spencer Gifts where there was an entire wall of gross and gory latex, plastic and rubber masks. I loved this stuff before I even saw my first horror movie, and some part of me has always been enthralled (not disgusted) by gore.

For whatever reason, severed body parts were the ultimate example of this in my little brain, and ever since I saw the ad in Fangoria I’ve wanted a realistic severed limb. What would I do with one when I could finally afford one? Who knows, but I’d of put my money on odds that it would be good and fun.

Well this is the year when all of the factors converged to place an awesomely realistic, yet not overly expensive severed arm in my, um…, hands.

See, it’s not that I haven’t come across rubber severed limbs before. Heck there were fake severed arms akimbo at Wal-Mart and the Spirit Halloween store last year, but they were all kind of goofy. Either they were more of an "arm trapped in a door" kind of gag with a bit of shirt stapled to them or the color was just all wrong. In fact, I’ve found more hot pink severed limbs than you can shake a stick at. What I wanted was realism, and from everything that I’ve seen, realism comes with a mighty high price tag (like $100 a limb.) I’m not cheap, but I do have bills and responsibilities and at the end of the day I just couldn’t look my fiancee in the eyes knowing I blew a C-note on a silly rubber prop, no matter how much I think it fills this gaping gore hole that I’ve been carrying around for the last 20 years.

But this year, as I’ve said, the forces of good came together like the Monster Squad at just the right time to deliver me into the newly re-stocked sprit store where the first thing I saw upon entering was this: 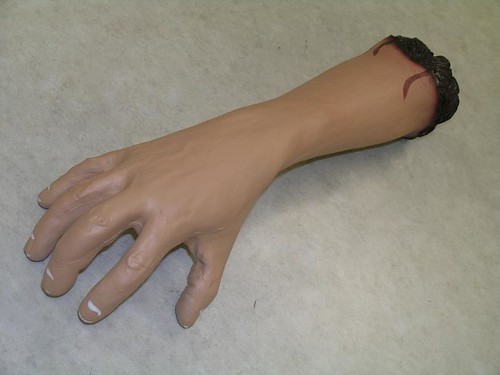 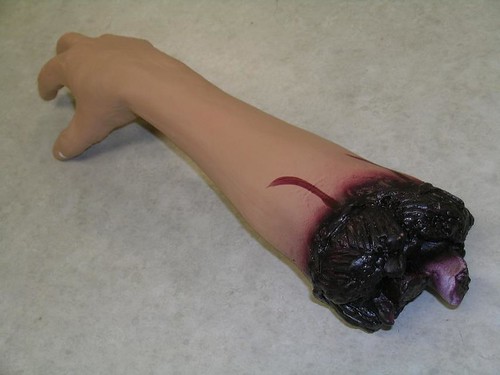 I was speechless. As I lifted it off the rack to see how much it was I went from speechless to making silly happy chirping noises while dancing in the aisle. It was only $10. Ten Bucks! Purchase justified by that alone. So since I’ve picked it up I’ve made sure to find at least a hundred things I can do with this great severed arm.
Like pretending I’m a zombie at work. 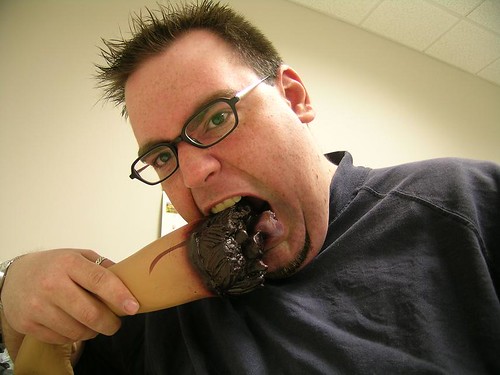 I’ve even found that both of our pets love it as a back-scratcher, which is the equivalent of crack to them. 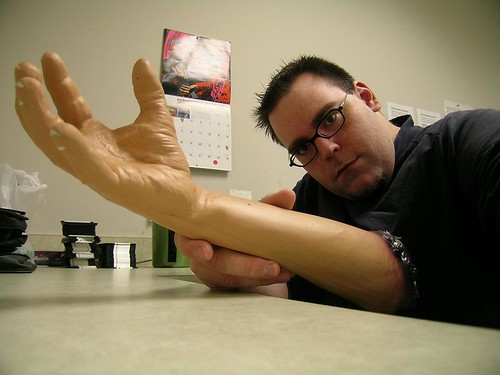 So until tomorrow, here’s my severed hand extended to ya.

The stars came out for the Monster Squad Premiere…

Can you imagine the Kirby Crackle in your mouth? It’s the sound of the war agaisnt the Tooth Invader!