Yeah, so I know it’s only the middle of September (and if you’ve been reading the blog you’ll know this already), but I am so jazzed for Halloween this year. It’s not even like I’m waiting for the big day or anything, though I do think I’m going to dress up this year. I just want to be surrounded by orange and black, skeletons, and little Frankenstein baubles. I don’t know. So I’ve been staking out every store in the area that might even consider carrying Halloween swag and some have been cool (Target) and some lame (The Family Dollar, my so called Halloween Headquarters that had a grand total of 3 feet worth of crap that even the dollar store won’t sell.) Well in the back of my mind I’ve really been waiting for one store in particular to open, the Spirit Halloween store which is a seasonal place that floats from one derelict strip mall to another as the years pass.

Over the past two years it’s definitely wormed it’s way into my heart as one of my favorite places to unload all the cash that I should be spending on stuff like food and rent. Well I finally found the new location this past weekend and the fiancée and I popped in after work yesterday to see what this year’s set up looked like. I was kind of hoping that they had some new stuff because last year it seemed like leftovers from the previous year. Well I couldn’t have been happier to see that over half the store was filled with new stuff and they were still unpacking a ton of boxes. The store is in a very beautiful place this year. It took over a place that used to sell outdoor furniture and garden accessories or something like that so there is a ton of room. Here’s what the outside looks like: 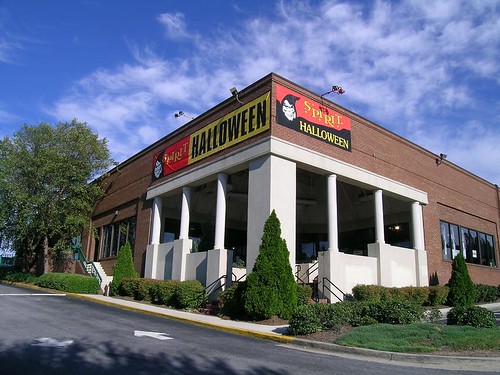 Unfortunately it’s on the tail end of a run down shopping center that’s in the middle of having the entrances remodeled so that may slow down business for it, but that just means there will be more thing for me to pick though I guess. I don’t know how well you can see it, but the entrance to the actual store is really cool, there are two sets of stairs that lead up and converge on the door, which is set into the building at a kitty corner. When you walk in you are in a recessed pit that hopefully will be decorated all dark and creepily soon. 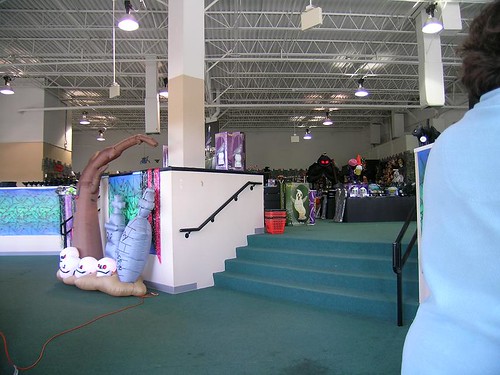 This year’s location is the largest one yet which is cool because it was pretty cramped last year. It was hard to get a picture that adequately showed just how large it was. Here are a few of the better ones: 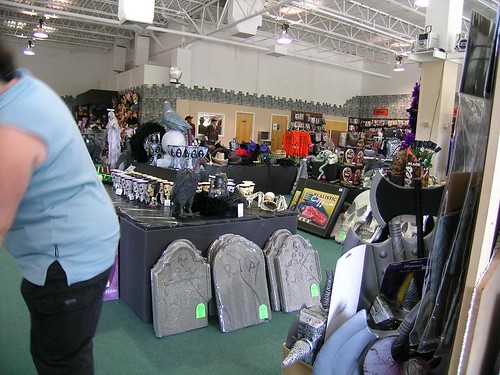 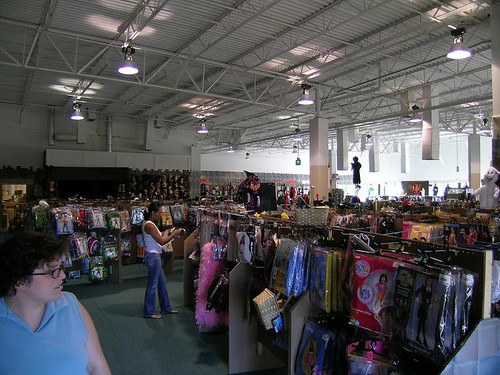 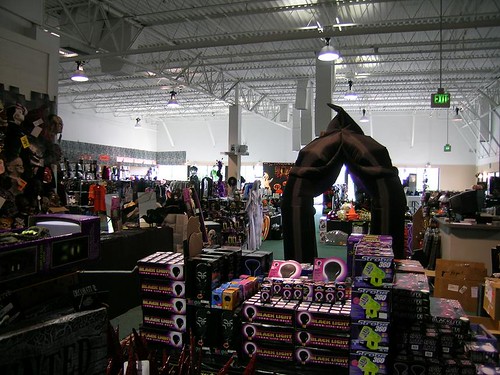 Considering that all they sell are costumes, accessories, and every other Halloween branded item you can think of, this really is the biggest and best. This years they also tripled their rubber mask section which is awesome. Though I tend not to buy them, I do love looking through rows and rows of masks. 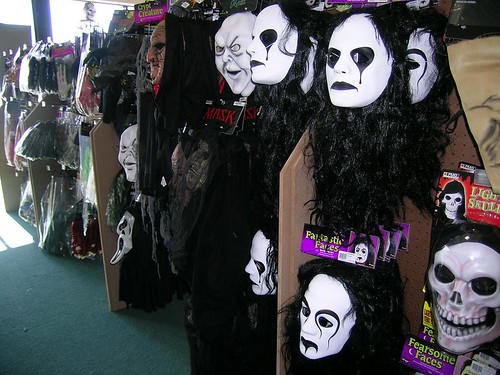 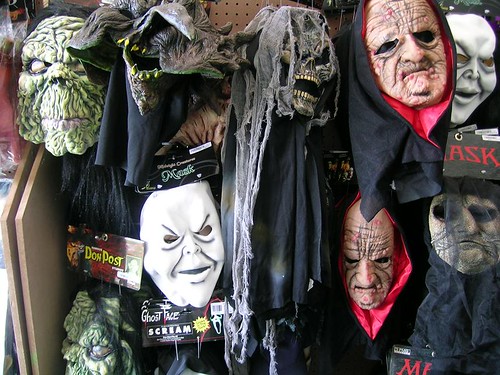 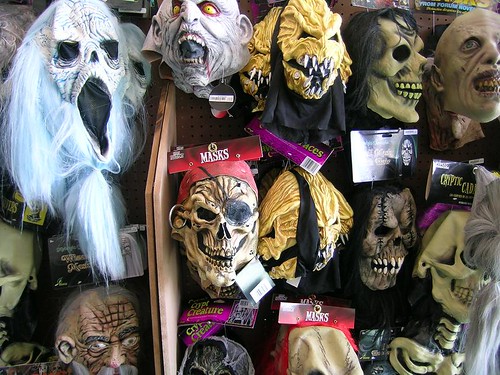 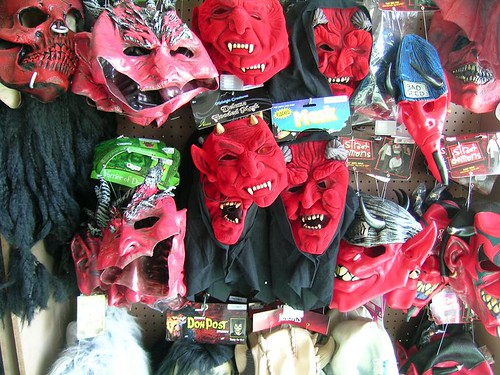 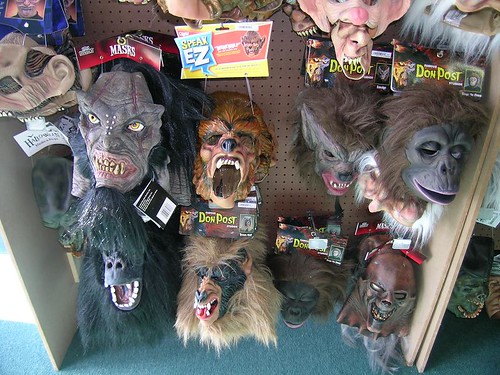 Then there were the more upscale masks (click to enlarge): 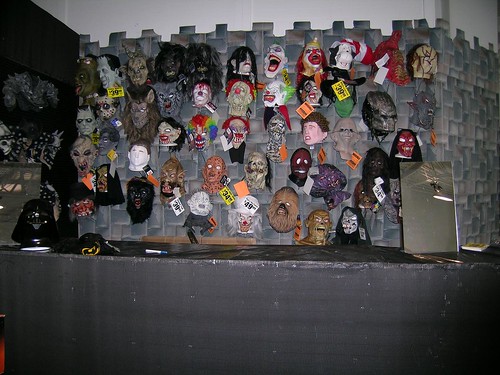 I’ve wanted that Herman Munster mask for three years now and I still can’t bring myself to drop $40 on it. Just don’t know what I’d do with it.

Best of all was their new severed limbs section. See if there is one thing that I’ve truly wanted for the last 20 years it’s been a realistic severed limb. If you look in the ad that I posted about a few days ago you’ll notice the severed leg at the bottom left. I’ve coveted that leg for so long that I never thought I’d find one that was cool looking and affordable. In the below picture you can see that there are two styles of fake limbs. The really pink one in plastic which they’ve sold three years running that looks just awful to me, and the super realistic ones to the right of the pink ones. I was ecstatic when I saw these because there were cool looking and only $10! Sweet Jebus. I think my next entry will be dedicated to that awesome severed arm I picked up. I need to go back for a hand. 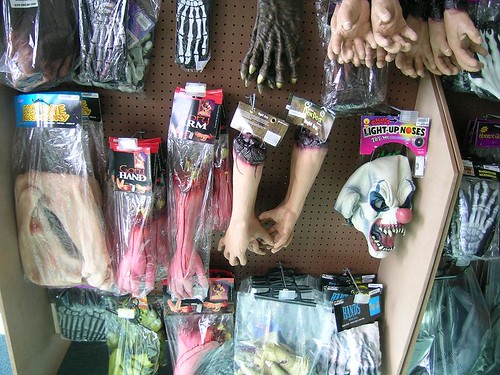 On of the other things that I love about this place is that they not only cater to people who want to buy an entire costume in a bag, but also to the people who want to get a little more creative with their masquerading. As you can see below there is an entire wall (plus four short isles of additional stuff not pictured) of make-up and latex appliances. My get up will probably come from this wall this year. 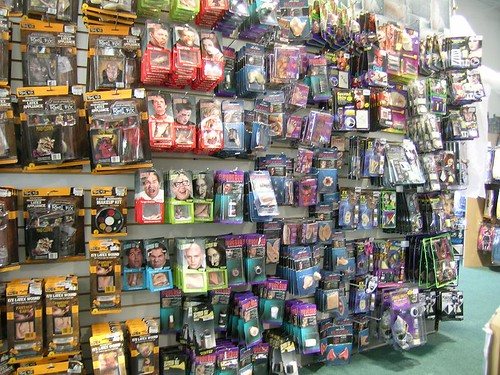 As we made our purchases and started walking out of the store we were greeted by one last cool thing, this midnight cowboy of a life sized zombie that had a little more than a passing resemblance to a certain Fly Boy from the original Dawn of the Dead flick. Oh one day I’ll be able to afford props like this when I rule from on high, wielding my mighty Halloween scepter of affording. You’ll hear me yell, “I’ll take that!�? in my loudest and best impression of Dr. Orpheus from the Venture Brothers. Yes you will. 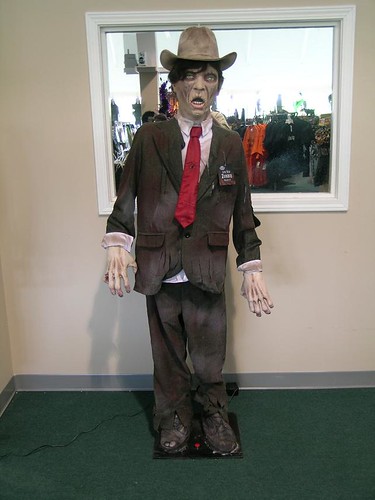 Thinking about why I draw…