I was kind of early going over to a friend’s house the other day, so I decided to drop in on an Eckerd’s and check out their “Halloween Headquarters? fare, which was pretty darn dismal to say the least. While walking down the toy isle though, I stumbled upon a cool item that I haven’t seen in years, but was a staple of family vacations and trips up north to visit relatives, the Lee Publications Yes & Know Invisible Ink Game & Quiz Book. 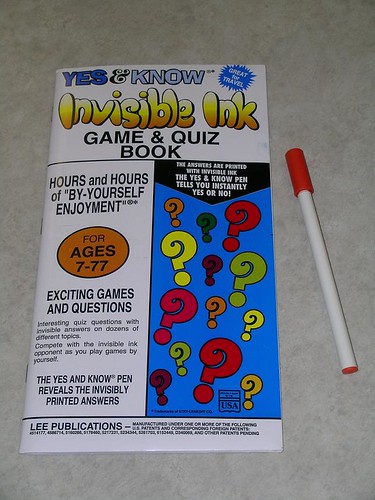 These invisible ink books are right up there in memory land with golf tee jump-a-peg games and Rubik’s Cube as my pre-Game Boy source of entertainment on trips through most of the 80’s. If you’ve never owned one of these booklets, they’re basically just a bunch of various games that you play by using the enclosed pen to reveal hidden information. 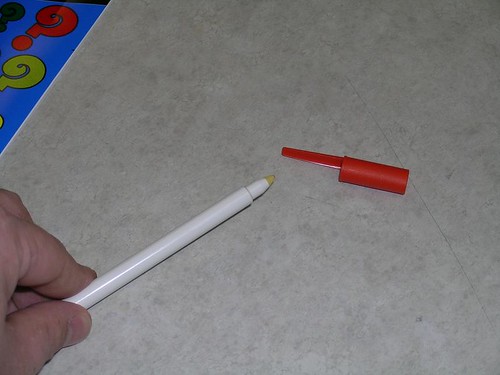 The included pens have been the exact same since they were first manufactured, white markers with orange caps and a slightly yellow “invisible? ink that always seems to be just this side of running out of said ink. The games can vary, but are pretty much some combination of Hangman, Bingo, Tic Tac Toe, Black Jack, sports games, and my personal favorite Fleet, a knock-off of Battleship you play by yourself. In fact one of the selling points of these books is the fact that you can play all the games by yourself boasting “Hours and Hours of By-Yourself Enjoyment? (which is of course a registered trademark.) Since there are typically at least two of the same game per page you can play “against? a friend, but the greedy little bastard in me wants to keep all the “Enjoyment? to myself. 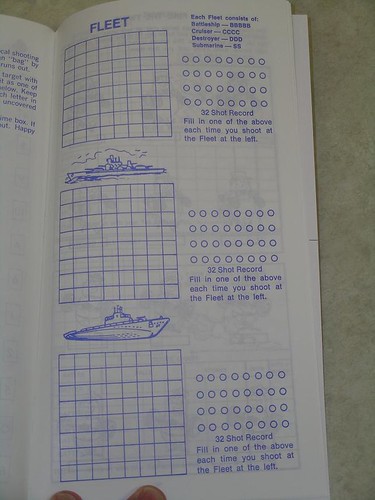 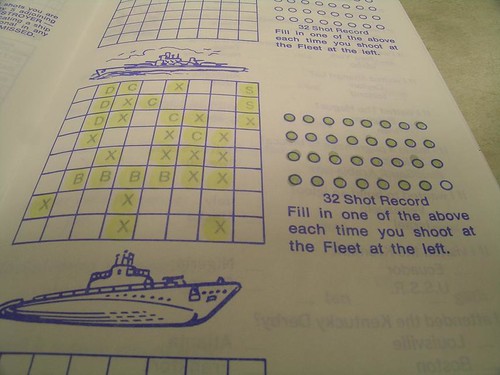 Above you can see how a typical game is played. In Fleet for example, you have two sections, a graph board with four hidden ships and a series of dots to record the number of shots made on the board. Basically you take a shot at a square on the grid by uncovering it with the marker. If it’s an “X? you missed, and if it’s an “S?, “D?, “C?, or “B? you’ve hit one of those types of ship. You get 32 shots to try and uncover the 4 ships, each of which is a different length ranging from 2 to 5 spaces. Lets just say that I rarely win at Fleet. The above picture is one of the fulfilling times when I’ve beat the game. You’ll notice that I’m one shot away from filling in the last “B?. 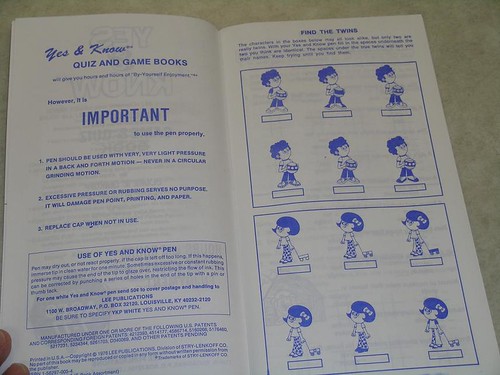 When I was a kid the obvious draw of these books was the magic of the “invisible ink?, but now that I’m a little older and my bar for amazement has been risen a bit, I’m a lot more intrigued by the fact that these books haven’t changed a bit since they were first published in 1976. In fact the books still bear the 1976 copyright notice with no other dates listed, and if it weren’t for the Choking Hazard warning on the back cover (a fairly recent change in toy products, I assume referring to the pen cap) I might even believe that these haven’t been made in the last thirty years. The pens sure seem dry enough for that. One of the cool things about this though is the fun 70’s cartoon-y style to all of the interior art. Take for instance the Donnie and Marie cartoon styling in the above-pictured game of image match. 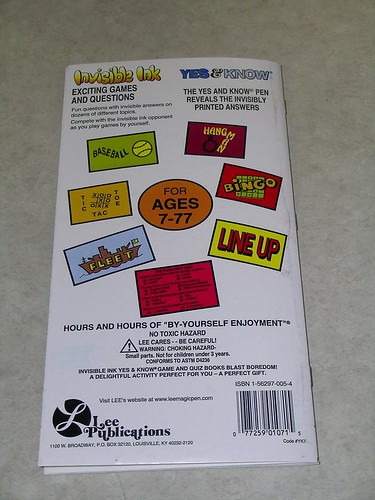 I’m not sure, but I believe there are only like 10 permutations of the basic Yes & Know Invisible Ink Game and Quiz book in existence. I picked up the one with the Blue and White cover, but there were also Yellow, Red, Green, Orange ones available, all of which had a different silly age requirement gag on the cover. I picked the blue because it had it at 7-77, and 7 is like my favorite number ever. Though I don’t think this particular copy has 48 more years of “By-Yourself Enjoyment? left in it, I do hope that there will still be invisible ink game books available when I’m 77.

I just looked them up and yes, they do have a website and online store, so if you remember these from when you were young and don’t have them in your area, you can pick them up for just about the same price you’d pay in a Stuckey’s off some backwater highway in middle America.