I am so working on another podcast. Seriously. No really I am. This next one will be all about my childhood memories of school and such related nonsense. Jerzy over at Make Like a Tree Comics had mentioned talking about 80’s school supplies like erasers and stuff awhile ago, so I thought about it and culled together everything I’ve got and I think there’s enough to make a decent podcast so that’s what I’m gonna do. Yup.

So as sort of a teaser to that, here’s a bunch of neat 80’s erasers that I’ve accumulated. 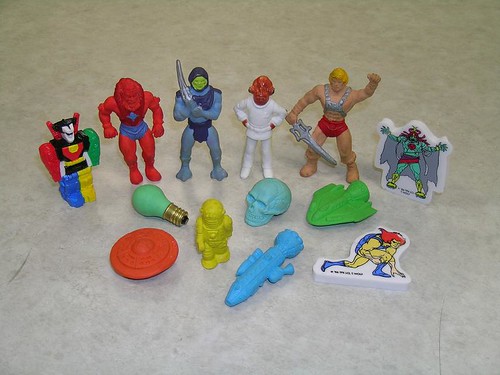 It’s not a super huge collection, but it pretty much encompasses what I had when I was a kid more or less. Now for the record, I pretty much don’t have anything that’s original from when I was young. Too many trades, deals, long distance moves, and parents who don’t like clutter have destroyed pretty much everything that I once held dear and for the most part I have no interest (read, "the money to procure") in trying to get them back. On the one hand there’s the thought of buying someone else’s toys that seems kind of depressing and on the other it’s just too freaking expensive to be justified. I mean I can’t imagine spending more than $10 on a Transformer figure when it’s just going to sit on a shelf or in a box. Luckily a lot of the stuff that I was into as a kid has popped back up in recent years as both the original He-Man and G1 Transformers lines were reissued in commemorative packaging so I’ve managed to pick a few of those up. So pretty much, that’s where I stand on buying back my childhood.

There are some items though that are a little more obscure and tend to wax and wane as far as their secondary market value is concerned. 80’s school supplies fall into this category. Lunch boxes for instance can sometimes fetch over $40, but I’ve also seen them as low as $5, so if you’re patient chances are you can get that sweet Knightrider box and thermos for about as much as you’d spend on one lunch these days. Erasers also fit squarely here, though the branding seems to make a lot more of a difference. Over the last year I’ve broken down and started watching the auctions on Ebay and I’ve noticed that pretty much if they have any type of Transformers branding the erasers won’t sell cheap. But there are some other brands that don’t seem as coveted and therefore can often be picked up for pretty darn cheap. Take for instance these Thundercats flat picture erasers: 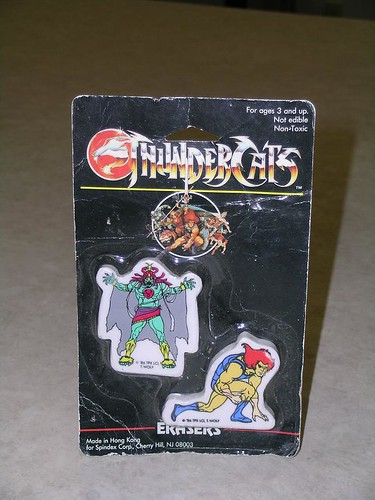 I picked these up for $2 still in the package. Now why someone kept these in the package for 20 years is beyond me, but there they are. I also managed to get this Admiral Ackbar figural eraser for $1.50. 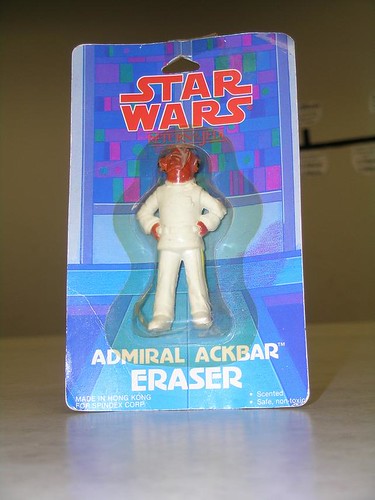 So if you watch long enough you’re bound to find this stuff cheap. So over the last year I’ve scraped together this modest collection of erasers that I really dig. When I was in the third grade, back in 1985, I had just started to become aware that there was a world of school supplies beyond your standard yellow #2 pencils and basic red or green triangular pencil topper erasers. It was around this time that my elementary school opened it’s little school store window by the principal’s office where they sold ruled paper in packets of 25 sheets, wooden rulers, all kinds of seasonal and branded wooden pencils (like the Atari series), and cool (though non-branded) figural erasers. It was at this school store that I bought my first rubber dinosaur, light bulb: 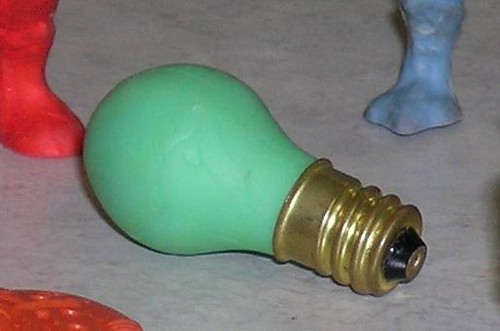 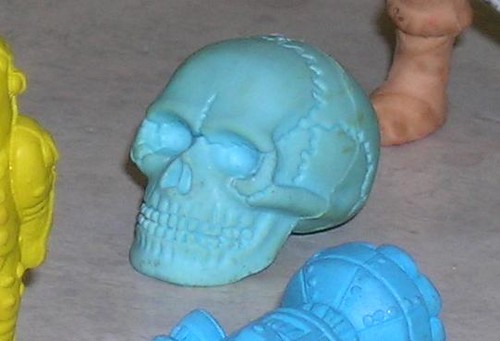 …and space ship shaped erasers. What’s funny is that no one I knew used these as erasers because they were too cool and fun to mess around with while the teacher was blabbering away about multiplication and the science behind windmills. Who cared about how to spell "Couch" when you could have anachronistic prehistoric battles with T-Rex’s and UFO’s.

Of course, the really cool erasers were the ones based on toy lines and cool TV shows, and for these you had to go to places like Eckerd’s and Woolworth’s. It seemed pretty rare, if I’m remembering correctly, to have more than a couple of these more upscale erasers. I only remember my mom buying me one, which I got in my stocking for Christmas, a He-Man Merman eraser. My mom was under the impression that he was my favorite even though I would constantly stick my Stratos and Trap-Jaw figures in her face. The only other one I managed to get as a kid was the Admiral Ackbar pictured above that I had to trade a whole mess of dinosaurs to get. 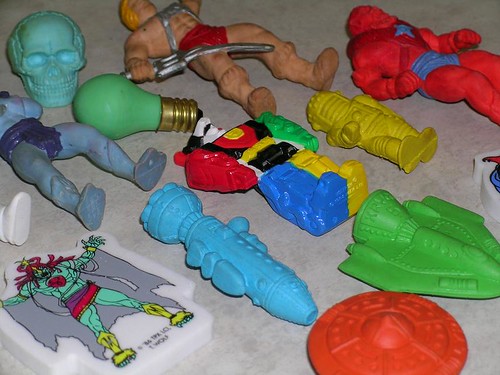 What I’ve found kind of interesting is that for the more basic figural erasers like the space ships and stuff I’ve had to bid on British Ebay auctions. It seems like all of these now reside on that small island in Europe. I’ve also noticed that collectors apparently really like their dinosaur erasers as those are the most expensive.

All in all I’m pretty happy with this assortment, though I would like to add a few transformers to the bunch. Who knows maybe after this new Michael Bay movie comes out next summer collectors will be so disgusted by the re-designs that it’ll put them off fighting over figural erasers shaped like prowl for a little while. One can only hope. 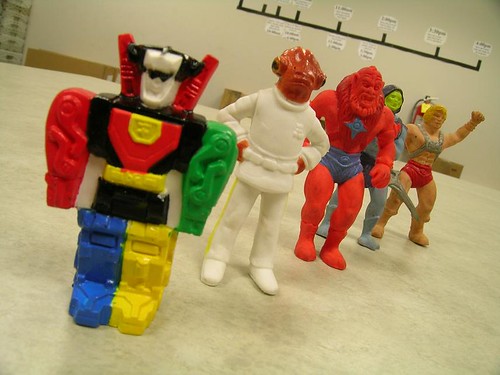 Halloween Mask Madness, Day 11: I am not an animal, I am a human being…

WKRP is back on the air, sort of…

Before & After Ecto Cooler there was…Ecto Cooler?