So one of the things I’ve been scouring the city for recently are some decent flea markets or antique shops. Pretty much I’m looking for places that sell misc. stuff like records, used books and odds and ends from the last few decades. I haven’t had all that much luck though I did find a little place in an out of the way decaying strip mall that was pretty neat. It was pretty much set up like a mini flea market, but instead of having a bunch of manned booths, there was just one guy and his daughter selling a bunch of other people’s stuff that was all marked by the sellers. It was the best place of the kind I’ve found so far and there were some pretty cool treasures there, though most of it was all dishes and every record album ever that no one ever wanted.

There was an entire section devoted to toys which was pretty weak, but I found a couple choice items like a pissed off smurf PVC figure, a very wobbly Hannibal Smith A-Team figure and this pretty cool E.T. pin that was still in the package. 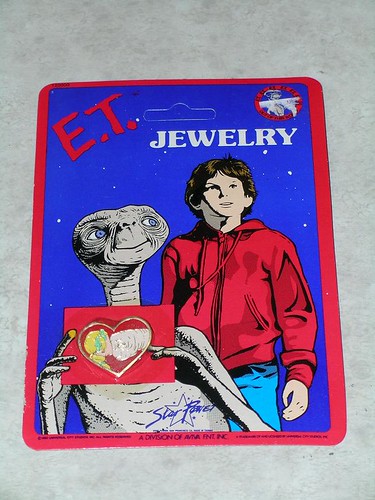 In fact there was an entire display case of them, all marked $1. There were a few different styles, one of the E.T. logo, an E.T. with the wig and bowler cap on, and one of just his hand pointing up with the tip all yellow and glow-y, but I thought this one was the best and cutest. Here’s a better look: 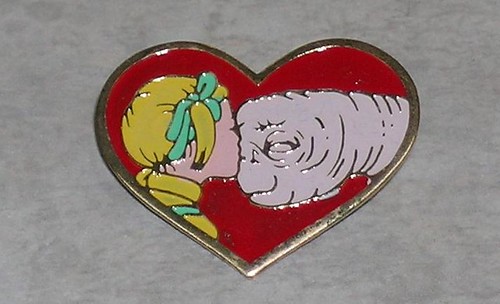 If that isn’t just the cutest thing in the world, I don’t know what is.

I had a pretty big E.T. obsession as a kid though I never really had any of the merchandise related to the flick. I had a plush ET, but not the cool faux leather one that all my friends had, mine was all fuzzy and seemed a bit too girly for my tastes. Faux leather seems more of a man’s stride I guess.

I remember one Christmas in particular where my next store neighbor Matthew pretty much got every imaginable piece of E.T. merchandising know to man including the board game, and Awesome mother ship replica, a little Elliot and rubber E.T on a bike, the faux leather doll, and an entire box of E.T. trading cards. I was so jealous, and about four months later when he had lost total interest in the franchise I managed to trade the little plastic Elliot and E.T. on the bike from him for like one useless Star Wars figure, Pruneface I believe. A couple years later when we got our first VHS player, that was also one of the first movies my family bought, and it’s pretty much been a staple of my video library every since.

Even now, years later, I still love that movie. Even the Jesus like resurrection scene that really makes no sense other than Speilberg pummeling the pubic with the crying tear club. Good stuff.

Damnit Minmei, why don’t you just shut the fuck up!