Alight, I’m back with some more Halloween finds from around town.

First though, Kirk at the Secret Fun Blog found these awesome Creepy Classics monster figurines at Dollar Tree, so I thought I’d add my voice to let everyone know these are around. They’re pretty darn cool for a buck apiece, particularly the Mummy figure as it’s a neat detailed mold for such a small piece. There are a few other things out from the same company including thumb wrestler versions of all the figures, little buckets of goo packaged in Universal monster fashion, and as Kirk also mentioned in his blog, posters. There’s one for each of the six figures released and at a dollar that’s a steal even though they aren’t the best representation of Universal Monster posters (for instance "Karloff" is cut off the Mummy poster to distance it from litigation and junk.) I picked up a few of these and I’ll try and get some pictures up by the weekend.

The company also released decks of playing cards with the monster poster art on the backs. I picked up the Bride of Frankenstein cards because they were die-cut in the shape of the monster’s head, which is pretty cool. Though costing a dollar sure does effect the quality of the product. The slick laminate used on the cards is already chipping off, but then what do you expect from dollar store fare. Like Kirk said these can be found at your local Dollar Tree. 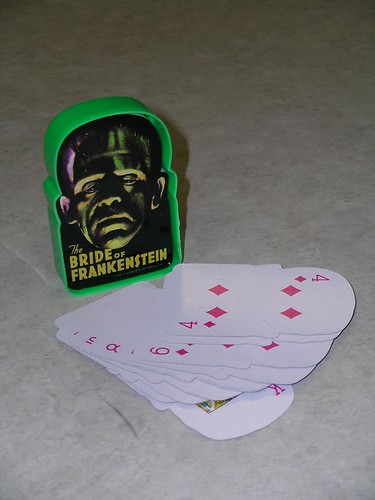 I’m almost considering limiting my purchases to a dollar each this year as I’ve found a lot of cool stuff already like the glow in the dark skeleton in goo at Target, the Dollar Tree haul, and now this cool rubber Frankenstein’s monster mask from Wal-Mart. 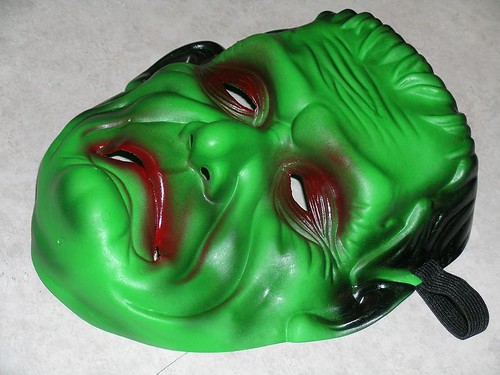 Considering the glut of Scream-like masks with hoods that seem to be permeating the market these days, this was a very welcome discovery. It’s pretty basic, sort of in the fashion of the thin hard plastic masks of yesteryear, yet with all the durability of the rubber masks of today. It even sports a pretty basic but cool bit of off mark spray coloring that adds that certain bit of nostalgia. 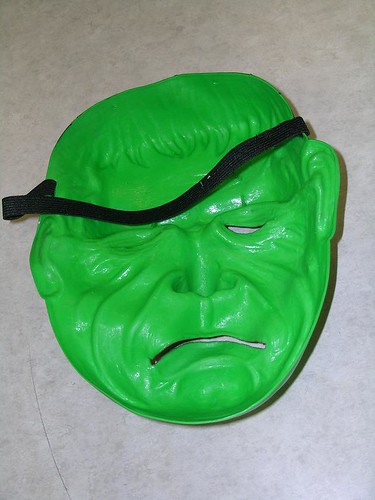 It’s also kind of cool because I think the mold is more based off of the Glen Strange version of the Monster than the Boris Karloff version, which isn’t my favorite, but it’s different, which is nice. 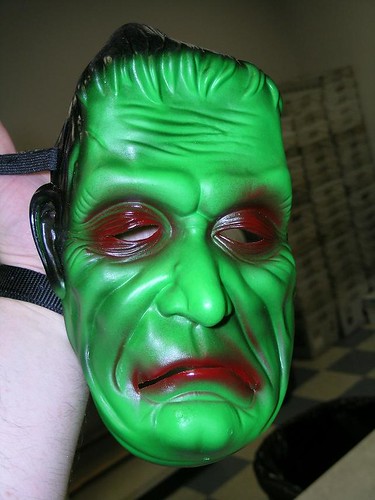 All in all, how can you go wrong for a buck. They have a few other masks including a weird scary toothed pumpkin, a pretty lame devil, and a skull that isn’t too bad.

The other thing I found at Dollar Tree were more stretchy monster figures, though these aren’t based on the Universal monsters at all. 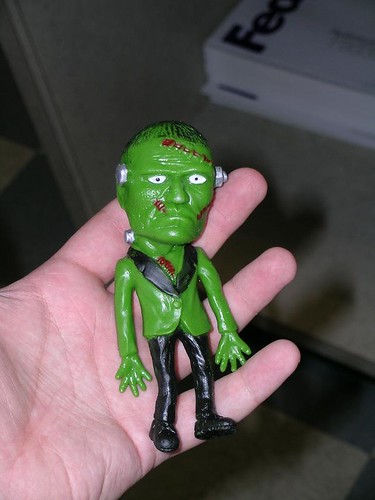 Franky here looks a lot more like Frank Sinatra what with his very short cropped hair and his dapper green evening jacket. 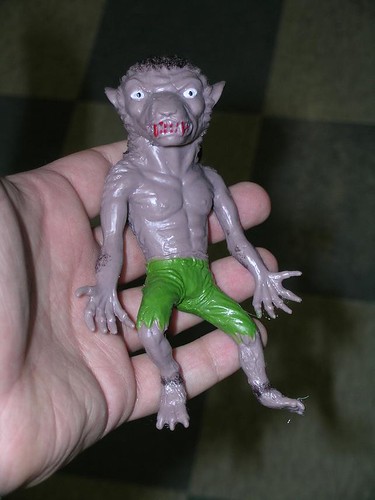 The werewolf here looks more like something out of that one Howling movie where all the wolves were marsupials (if you’ve every seen the pouch birthing scene, you’ll know what I’m talking about.)

So far it’s been a pretty fun season and we aren’t even into the middle of September yet.

Remembering my first experience with The Monster Squad…