Okay so here’s part 2 of my initial Halloween haul. I picked up this guy at Target, and I must say that even though I’m not a fan of mego-conglom-departmentstore-supermarket chains Target has got a pretty sweet product line or at least a distribution/purchasing executive because they always tend to have some really cool stuff at Halloween. 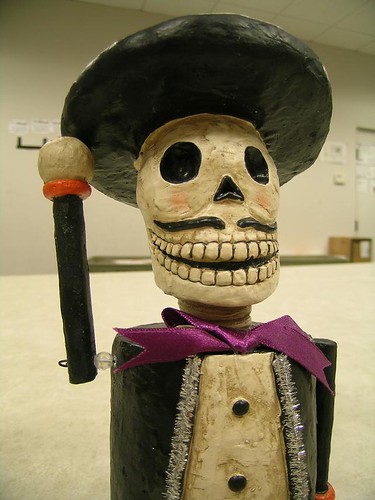 I’ve nicknamed him Senior Senior and he’s my personal mariachi skeleton/day of the dead representative and I love him so. I’m pretty big into skulls, have been since I was a wee kid, but I’ve never had one with a mustache before. 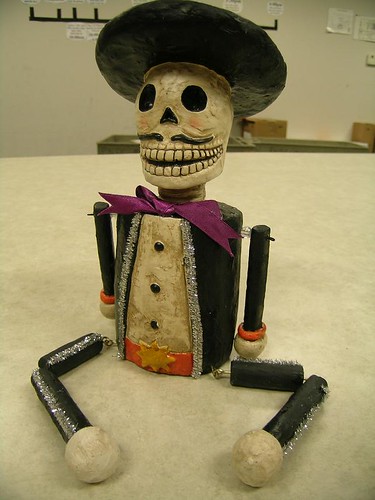 I think he’d fit right in with my severed head Feldman and Carrie’s collection of McFarlane’s Dragons on our DVD shelves. 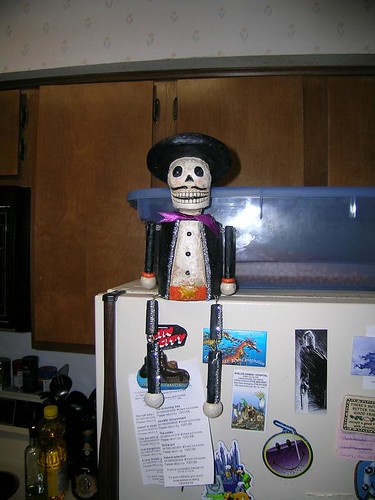 I caught him on top of our refrigerator this morning causing god knows what havoc.

The other thing I found at Target, was this crazy glow in the dark skeleton suspended in blue goo inside a clear plastic coffin. He was in the dollar bin between cutesy Frankenstein post-it notes and mini decks of playing cards shaped like candy corns. 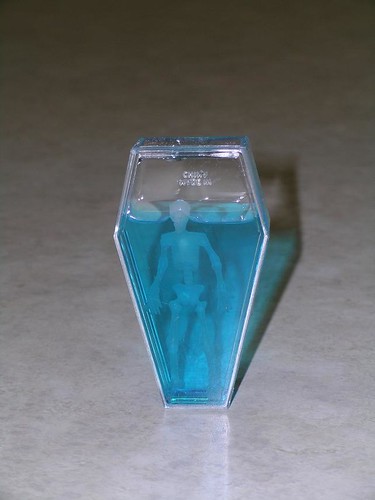 I’m afraid to open it because right now the goo has all congealed at the bottom and it sort of looks like the skeleton is all that’s left of a guy who downed in a sealed crystal coffin full of water and I want to keep it that way.

I found these next two guys at Toys R Us in their seriously dinky Halloween section. 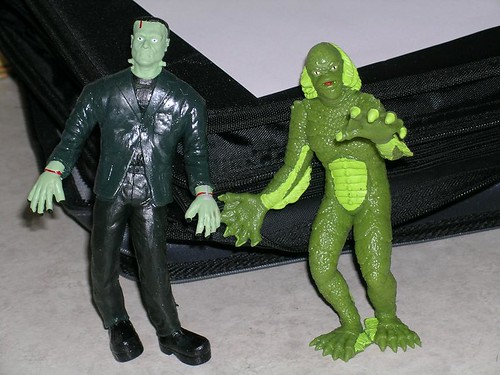 There was a whole box of figures including Dracula, the Wolfman, the Mummy and Frankenstein’s monster, and I was all set to get Frankenstein and the Wolfman when on another shelf I saw the Creature tucked behind a Dracula sippy cup. Someone was trying to hide the only Creature in that box assortment! Well, I dropped the Wolfman (who was way too Orange anyway) and picked him up lickety split because he needed to live in my home. 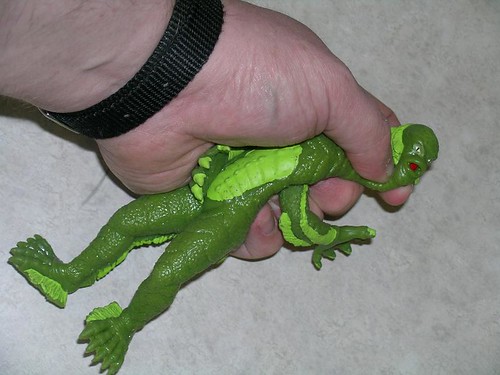 all these figures were of the “stretch�? variety sort of like Stretch Armstrong, which is alright but not my preference when it comes to toys. Aside from this though, the material they were made with makes it easy and fun to make them look like they are waving at you, or having a seizure, so I guess it’s all right. 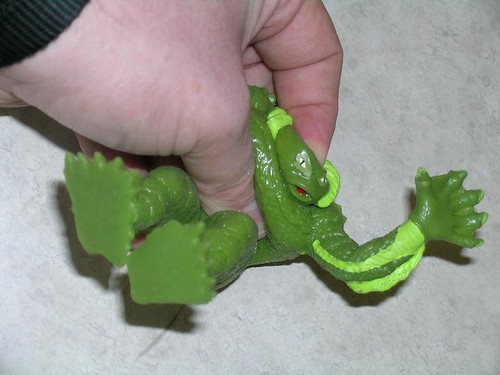 When I went out at lunch today I saw that Wal-Mart has their section up, though it was pretty lame. I snagged a few choice things though which I’ll share tomorrow. Also there should be plenty more to come as I also found out where our floating Halloween store is opening this year, so I can’t wait for that to open.

Back to the Future: The Other Marty McFly Theorem

Branded in the 80s Microcast Episode 17, diverting the Scorpio comet your way…