Well kids, Halloween is officially here as the local Target has finally spilled its Halloween beans all over the store (is that a horrible misused phrase or what?) I am so giddy right now, I just want to go out and buy 16 tons of candy and other related Halloween crap. But I’m trying to reel myself in on the spending. That doesn’t mean I haven’t splurged a little though. So today I present you with my initial Halloween crap haul culled from my local Target and Toys R Us.

To start, I’ll hit the candy I picked up at Target. First off, I am so not a candy person. My palette is much more geared towards salty than sweet or tart and even though I’ll always have a soft spot in my heart for some 80’s staple candies like Nerds, Bonkers, and Jolly Ranchers, I tend to not be all that excited with the basic Halloween candy fare. Usually it’s nothing all that exciting anyway, just fun-size versions of basic check out line stuff like snickers bars and Skittles and stuff like that. There are a couple of fringe companies that try to go in a more gruesome direction like molding chocolate into roughly shaped body parts like ears and eyes. In fact you typically see bags of chocolate eyes, and I’m surprised no one has packaged cherry cordials as eyes now that I think of it. There is one type of candy that I do tend to like year round though, and that’s gummi stuff like bears and worms. I can’t take it in huge does, but if I have to pick something, it’s usually gummi in nature. Well this year Target is carrying a bunch of gummi candy and I couldn’t help but buy a bunch of it. First up, Gummi Boogers by Flix Candy. 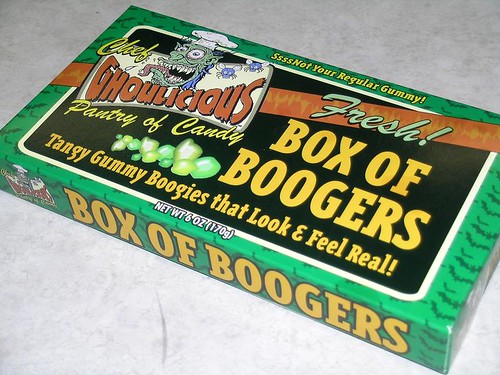 When I saw this box I was in love. The design and gimmick are pretty damn awesome and the art department pulled no punches with their gruesome mascot, the gummi chef!

This is the first time I’ve seen a product mascot that looks like it was drawn by Evan Dorkin or Simon Bisley! Now not all gummi candy is created equal. There are very distinct differences in taste and texture, and I do have my preferences. Let’s see there is your basic gummi’s in the vein of gummi-bears and gummi-worms. Then you have your more marshmallow-like gummi’s like your gummi pizzas, tacos, and hamburgers. There’s your more dense variety like your Betty Crocker fruit snacks. And then there is the sugar coated marshmallow gummi’s like peach rings and Sour Patch Kids. Out of these, my favorites are probably the more dense fruity ones, but I can deal with most of them. If I had to pick one that I just don’t like it would easily be the sugar coated ones because they are too sweet and I just don’t like the consistency of the sugar coating, not to mention that because we are in the middle of a decades long sour candy boom, they are typically tart and I’m just not big on tart. Well unfortunately these gummi’s were of the sugar coated variety, which is a bummer because the picture on the box makes it look like the dense fruity kind. Oh well.

To make up for it I did take another chance on a similar product. Galerie Candy’s Monster themed gummi assortment. 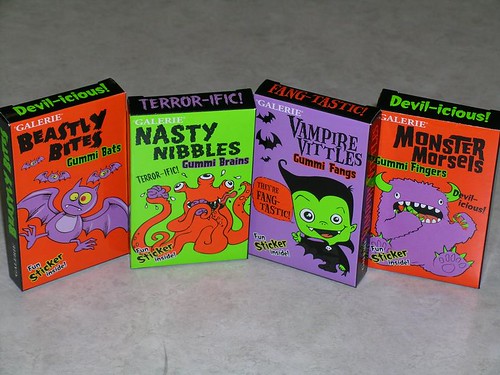 Included were Gummi bats, brains, fingers, and teeth. This set was a little pricey at $3, but it more than made up for what the Gummi Boogers lacked which was great quality and to top everything off stickers! 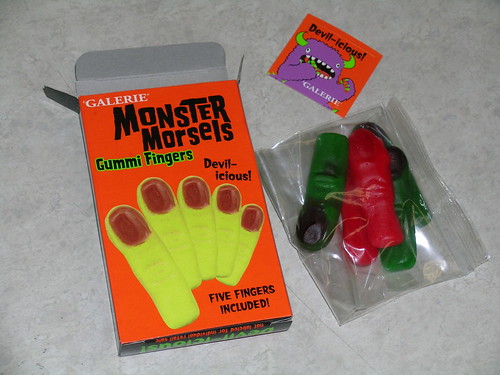 Each box contained a bag of five or six gummi candies and a sticker of the box art. As far as Halloween themeing goes, I think I enjoyed these gummi fingers the most as they’re all Frankenstein-y. 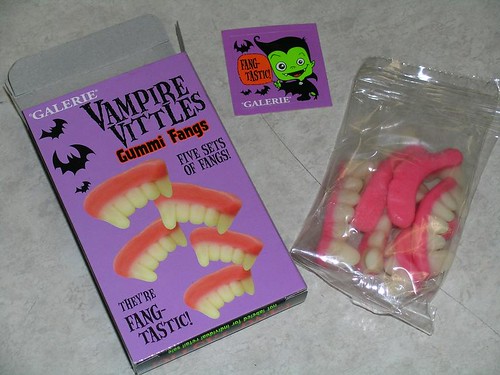 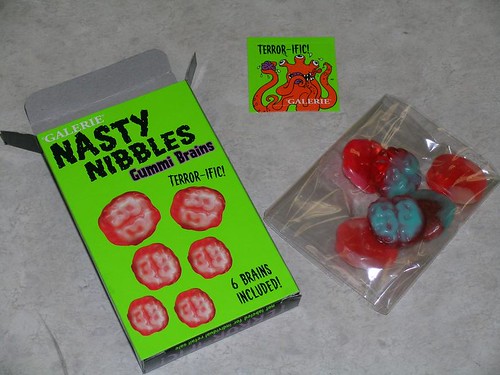 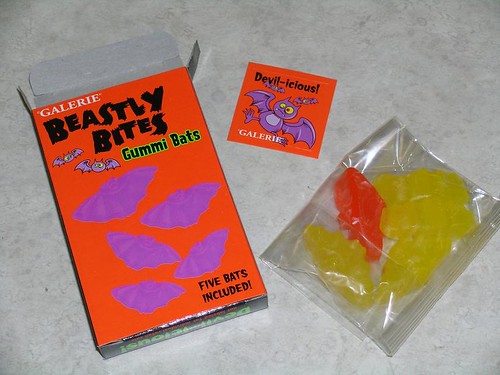