So lately I’ve been wondering about how my love for all things monsters and horror began. I know there were a lot of contributing factors such as Garbage Pail Kids stickers, which featured some disturbing and gross horror related artwork, and Halloween in general, but I know that there has to be more to it than that. There were some movies, Monster Squad, Gremlins, and Poltergeist in particular, that definitely added fuel to the monster fire as well as the original Universal Monster movies that I know my parents sat me down to watch at some point.

Being the 80’s of course, it was hard to not be aware of stuff like A Nightmare on Elm Street, Friday the 13th and the Texas Chainsaw Massacre, but I didn’t see those flicks until almost the end of the decade. Let’s see, there was some TV that influenced me, namely Tales From the Darkside, Monsters, Alfred Hitchcock Presents, The Twilight Zone and the occasional scary episode of Amazing Stories. Michael Jackson’s Thriller video didn’t hurt either staying on regular rotation on both MTV and my cassette player. I suppose the monster theme of the He-Man rogues gallery was an influence as well.

Of course there were also the books that I’ve talked about on the blog before, Samantha Slade, Bunnicula, and a few others that had monster theme-ing that I can’t remember the titles to. 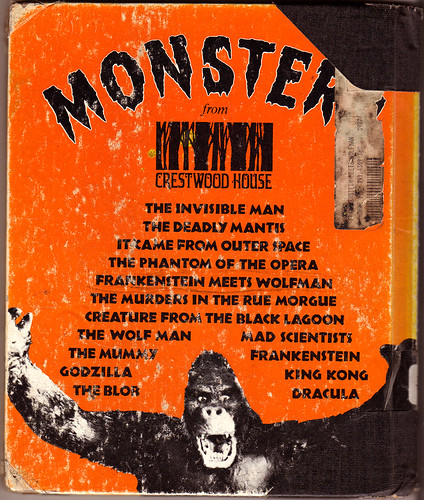 I’m pretty sure we had Dracula, Godzilla, Creature from the Black Lagoon, and Frankenstein Meets the Wolfman. Well after seeing these books for the first time in 20 years, I had to have one and I whisked over to Ebay with hopes that there was a bristling business in old out of print horror related school library edition books. Guess what? There was, and I picked up a couple, one that I definitely remember reading, Frankenstein Meets the Wolfman, and one that I just want for myself, Frankenstein. The Franky Meets the Wolfman arrive last week in horrible condition (there was no picture on the auction, but the price was right) but I still love it to pieces. Here’s a scan of the cover: 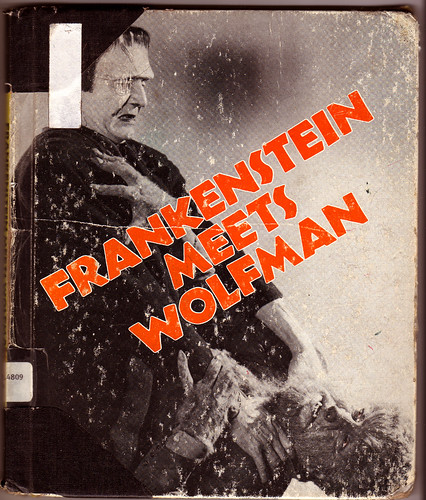 These books were a huge push in the horror direction for me because of the hours I spent pouring over the large crisp black and white photos and just the idea that there were so many other books in the series that I might one day stumble upon. I received the Frankenstein book in the mail yesterday and I was relieved that this one was in much better condition, yet after flipping through it I was sort of bummed, not because the content was bad, but exactly the opposite. This is the best kids book on Frankenstein that I’ve ever seen. Between its two worn covers lie a plethora of information on many of the various incarnations of Franky in the past 70 years, and if I had read it when I was a kid I might not have waited so long to watch the Hammer version, Curse of Frankenstein, until so late as there were a few really good photos of the Christopher Lee Monster.

Anyway, I am so glad that I stumbled upon these and can’t thank Neato Coolville enough for posting them on his Flickr account for the world to rediscover. Now if I could only find cover scans or copies of the series of hardbound school library editions of the Marvel Super Heros orgin books. There were four that I remember, the Avengers, Spiderman, the Hulk, and the Fantastic Four. Each book had the first two or three issues of the comic and a little introduction about the series. I guess that’ll just have to wait until another day…

Peel Here # 11, My lunchbox is cooler than yours, it’s metal and can beat up your stupid plastic one…

Getting Seasonaly Traditional with The League!