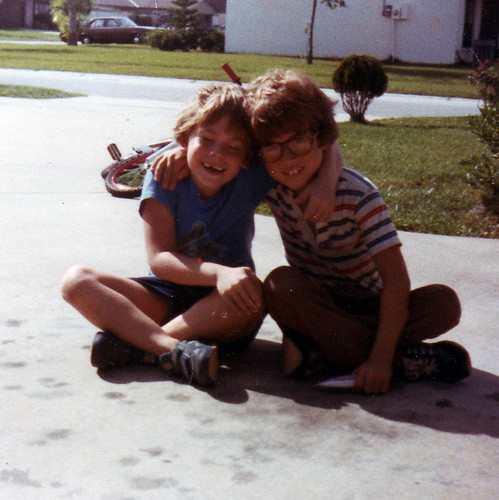 Two years ago I excavated the above picture out of a briefcase full of weird paper odds and ends that my parents wanted me to go though after they moved back down to Florida. I was filled with wonder and joy as the picture both provided a long forgotten face to a name and connected me a little closer to an earlier time in a decade that I really only remember the tail end of.

The picture is of my best friend Anthony and me, who lived down the street at the other end of the neighborhood. I sometimes get lost in the chronology of friends that I had at that age, not that I’m boasting that I had a ton of friends, but because I consider myself pretty shy most of the time and for a short period of time it seemed like I had a lot of “best? friends. I think a lot of this has to do with the amount of time allotted to a kid that hasn’t really started going to school, so when it feels like there was twice as many years worth of memories there probably really are.

My one great regret is that I didn’t have a picture of Anthony because some of my more crazy memories are stuff that we did together like digging up a bunch of creek clay to make sun-baked pottery out of (which we then sold at an amazing mark-up to the neighborhood) or the fact that his father kept a peacock that he found on the golf course in a cage in their garage. But now I found one and that makes me very happy.

The other thing that I love is that this picture, at least to me and compared to the rest of the photos I have of the time, is very early 80’s, which is a time period that I have fond memories for but feel very disconnected to at the same time. Most of the pictures that we have are from the time we spent in Orlando and that was a world away from Tampa. This picture though is awesome for me because of the Empire Strikes Back T-shirt, Anthony’s stripped polo, the brown slacks and longish-ruffed hair (which would be seriously gelled and moussed in years to come.) This picture feels like 1982 to me, and I’m so glad I stumbled upon it. I found a couple others that I’ll write about this week when I get a minute.