This past weekend the fiancée and I had an extra day off so we decided to take a trip up to a wondrous place, the Pendergrass Flea Market, the largest flea market in Georgia! I hadn’t been to a flea market in like 12 years and even then it wasn’t a proper one, it was inside an actual air-conditioned building and most of the venders were on the level selling outlet style overstock and stuff. What kind of fun is that? In fact I was convinced that I’d never get to relive the amazingly run down, junk, bootleg and garage sale style flea markets of my youth. So my hopes weren’t very high for the Pendergrass market, especially when I read that the main area of booths were constructed to be a replica of a small town’s main street. Seemed a bit too upscale. Oh, was I ever wrong, and much to my personal glee. 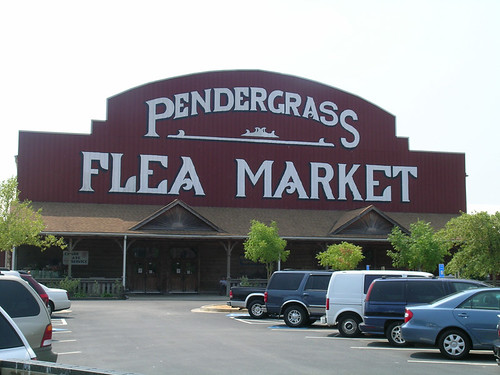 When I first walked in I was still not convinced as the booths really were replica buildings and that just sort of felt like too much money was invested in the place to really be bottom of the barrel, and I think at one time this was the fact. 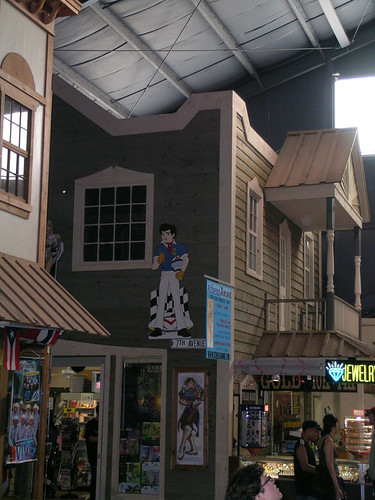 But upon entering the first store my mind began to change as I was surrounded by cheap knock off Asian weaponry in every imaginable permutation. I was instantly transported back in time and space to the kick-ass flea markets of my youth in Florida where I would stand transfixed at booths full of ninja stars, sai and over priced swords that I knew I would never be able to afford. I used to try and convince my parents that it was vital that I get my hands on this stuff so that I could protect the homestead, just like Ralphie’s daydreams in A Christmas Story. Maybe there weren’t any Black Bart’s around anymore, but there sure were giant evil robots, elite members of a terrorist organization known as Cobra, not to mention thousands of faceless ninja waiting to get us at every turn. Then never bought the story, and consequently they never bought me any ninja swag. 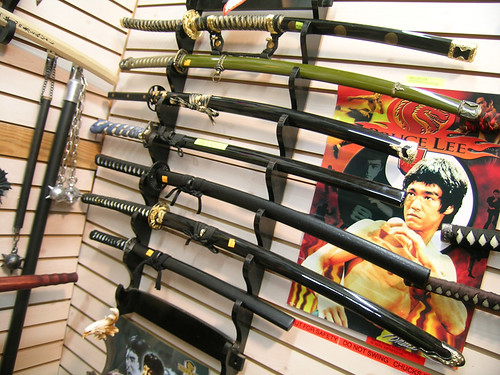 So as I perused the cramped shop I marveled at everything from replica Hatroi Hanzo swords to officially licensed Blade swords and throwing stars. They had sai and ninja stars priced at 10 for $10. And what’s that, there, against the wall behind the giant cardboard standee of Bruce Lee, yes are those Nunchaku!?! Called Nun-Chucks back in the day, these wooden sticks bound by a short bit of chain were the pinnacle of cool ass ninja weaponry. Swords were cool, but were heavy and obviously dangerous in a way that made them not very play friendly. Nun-Chucks though were perfect, with just enough pizzazz while swinging them around that you never had to do anything else with them. There was a kid down the block from me that managed to find a pair of yellow plastic ones that had Bruce Lee on the handles and everyone in the neighborhood coveted them. 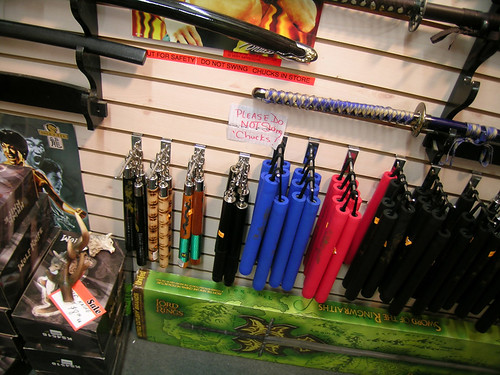 I made a vow to come back, but I had to see the rest of the place before I blew whatever money I had decided to spend on this place. One other thing that I thought was pretty funny about this place was that besides sharp objects and Bruce Lee memorabilia they sold bongs. There was a whole counter set up for pipes and bongs and rolling papers and junk. I’ve seen this at Dragon Con and sex shops here in Atlanta and stuff, but never out in the open in a setting like this. What made it even weirder and very uncomfortable was these two off duty cops that came in while we were looking around. 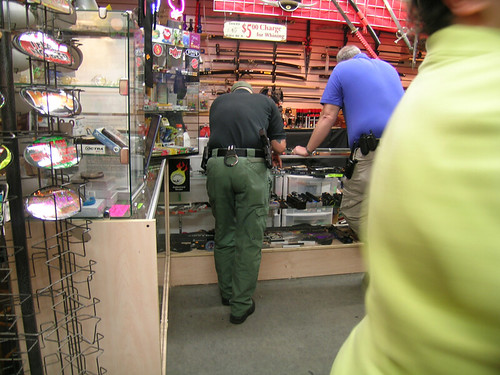 The sight of real guns always makes me uncomfortable and having the cops staring at a case of tazers right next to a display of bongs just didn’t seem right. 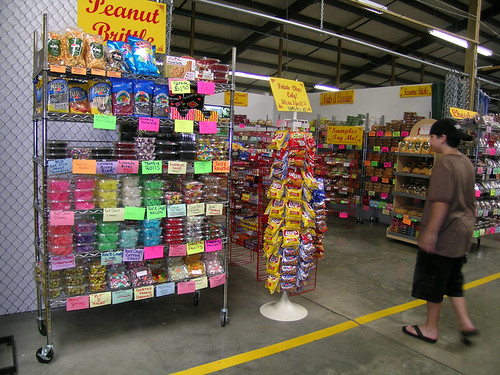 As we left the ninja store and made our way past the actual indoor buildings my suspicions subsided as we realized that the built up portion of the flea market was very small and pretty much the majority of it was just in this giant trailer like warehouse. Just around the corner we found another flea market staple of my youth, the odd dried food and candy by the pound booth. Unlike the booths from my childhood, all the merchandise had already been weighed and portioned out but it was the same principal. I remember the first time I found a barrel full of just banana runts as a kid and I was in heaven. Most of the candy here was kind of pedestrian, but there was a bunch of rock candy (don’t find it all the often in the city here) and more gummi stuff than you could shake a large gummi stick at. I found an awesome gummi assortment that I’ll talk about in a minute; I want it to be a surprise. 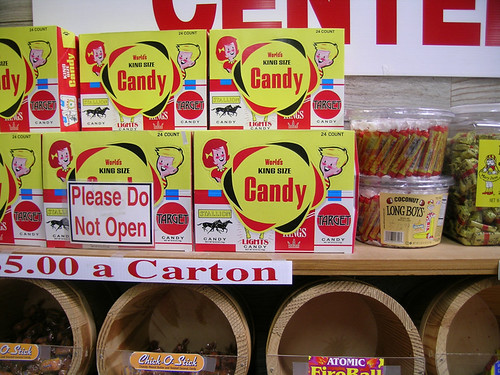 One of the things I found that was awesome though were entire cartons of candy cigarettes, ‘cause in Georgia kids have a two pack a day habit to support. 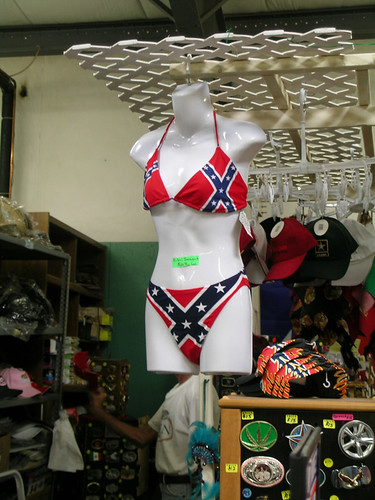 Now there was a bunch of crap in this place like old appliances, a butt-load of stuff to trick out your car, and clothes (mostly used), and occasionally this stuff would be cool like in the case of the bikini pictured above, but a lot of it was just crap and there was a lot to wade through. But this is the life of flea market shopping, and ever vigilant we pressed on looking for the wonders of the import bootleg market. Which were apparently just around the next corner! 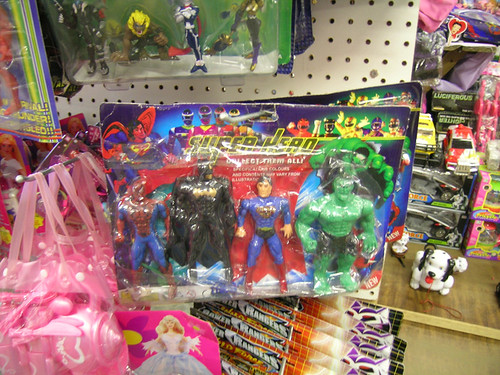 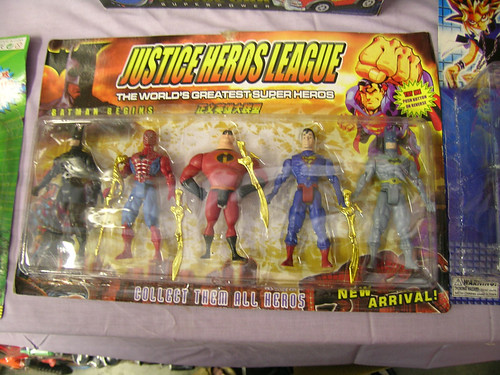 Bootleg toys are the coolest. Well, not really, but damn they make me smile. The above two sets were my favorites being so mismatched and fake that they’d make a bootlegger blush. What kid would be fooled by the Super Hero toy set or the awesome Justice Hero League featuring a weird assortment of knockoff movie versions of figures (Batman and Spiderman with silver webbing?), animated figures (the Incredibles), and a truly rad evil twin gray Batman. Did I mention that they all have sweet golden swords, ‘cause that happened in the comics. Man, I can’t count the number of times Batman and his evil twin Namtab fought each other with golden swords. I so wanted to buy a set of these, and even though I’m convinced they would be cheap, they weren’t marked and I find it hard to haggle when there is no price showing. 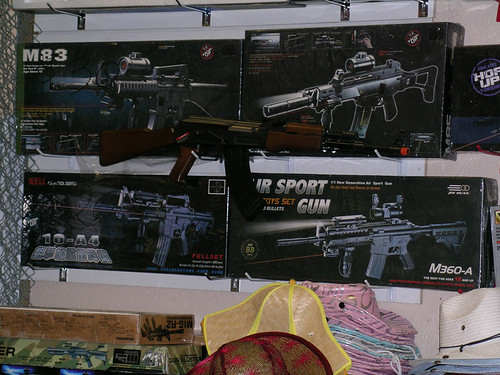 The other type of toy that was plaguing the place was amazingly realistic machine guns. That AK-47 in the above shot would fool even the KGB. Most of these guns could be field stripped too, which was crazy funny though kind of creepy too. These were actually expensive (meaning over $20) and I just didn’t have the heart to drop that much on any one item, though there was a replica Robocop pistol that was screaming out to me. 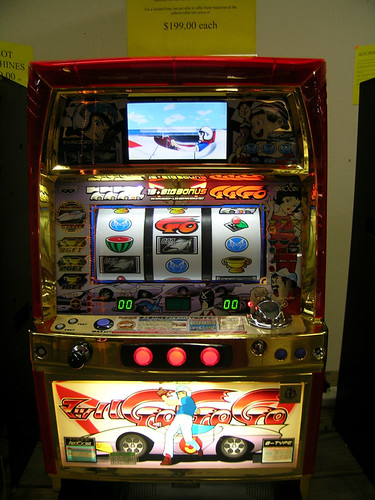 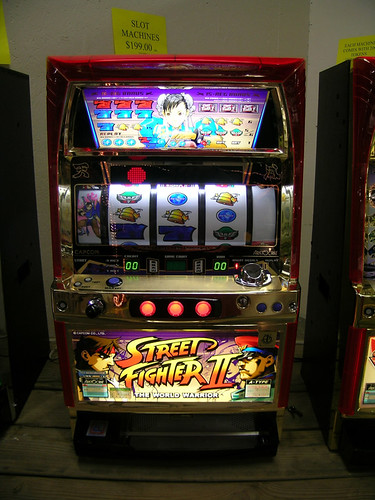 Another awesome item were these two anime themed slot machines. Both played full cartoon episodes on the top screen, so you could zone out to TV while you threw your money away on slots. I hope there are machines like this in Vegas. 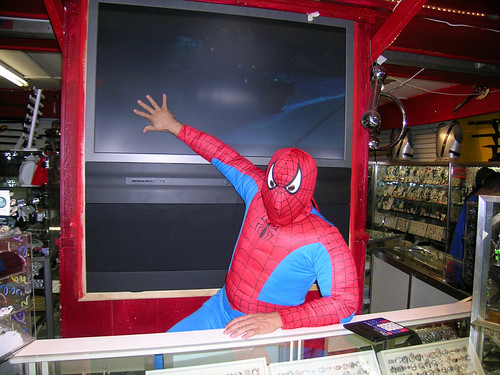 By and large though the best moment of the day was running into Peter Porker the amazing Spider-Ham! Not really, but this over the hill electronics salesman was pretty sexy in his teen sized Spiderman get up. He had the thickest Middle Eastern accent I’d ever heard and he wanted me to meet Superman and Catwoman (his son in a Supes T-Shirt and his very depressed looking wife in a Batman T-shirt) inside where they sold jewelry, knives and bongs! Boy, Peter is pretty sad in his later years huh? He happily posed for a few pictures, though I felt real bad when I didn’t buy anything and he let out a sad sigh.

We managed to get though the entire place, though it was sort of downhill after we left Spider-Ham. What kind of bummed me out was that there were two other types of stalls I was hoping to run into, a comic/baseball card shop and a gag/practical joke/magic shop, and though we did find them, both were closed on that day. But we had hit some fun places and I had a ninja store to get back to! Anyway, here’s a few pictures of my haul: 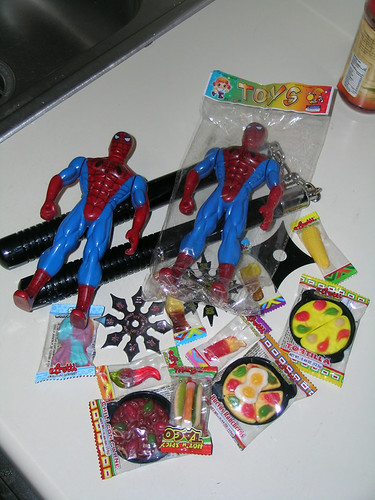 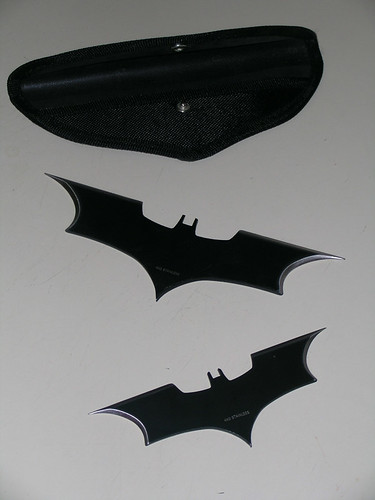 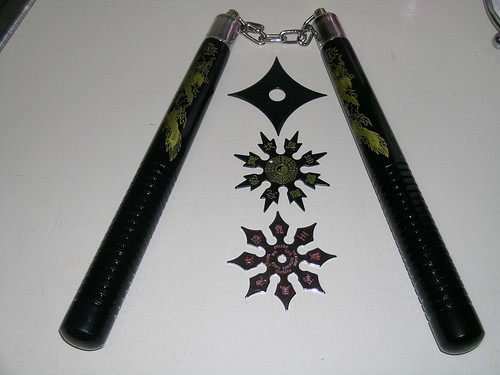 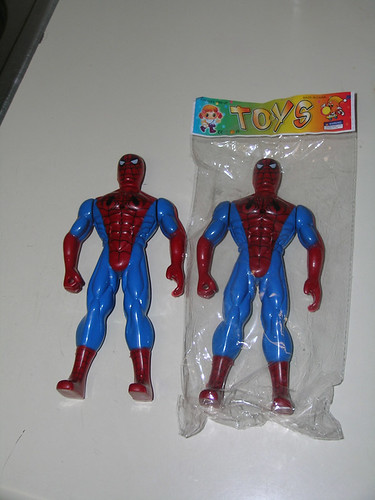 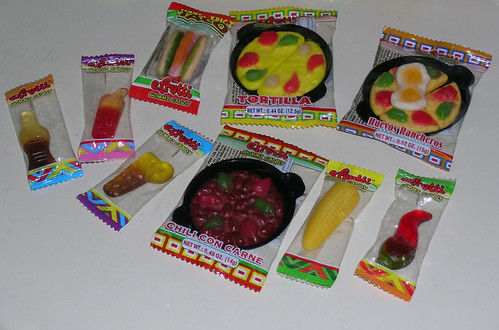 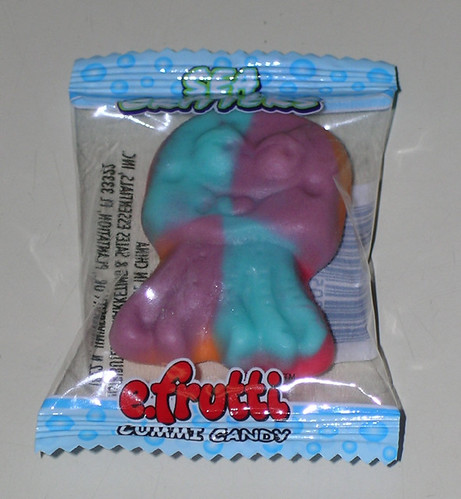 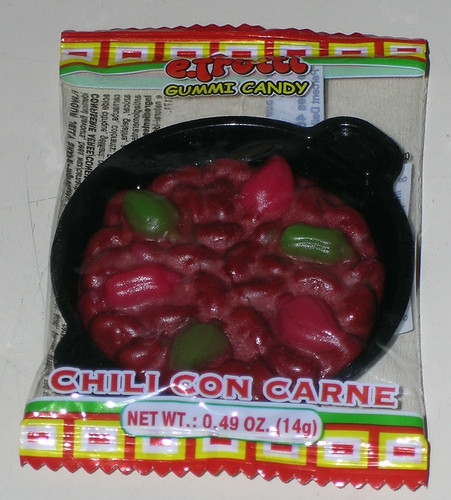 I managed to get all you see before you for a measly $30. I was so stoked when I got to pick out my Nunchaku. It was a hard decision and it ended up between the pair you see above and a pretty cool pair that was clear with images of Bruce Lee painted on them in black line art. The wooden ones above just seemed cooler. I also picked up a handful of ninja stars and a sweet pair of Batarangs that are pretty damn sharp and sturdy.

The other awesome find was a huge package of gummi’s called the Mexican Fiesta Meal. Included were some of the weirdest gummi molds I’ve ever seen including Huevos Rancheros and the crème de la crème Chili Con Carne! Holy crap that’s specific and gross, but cool. Now with the tiny gummi eggs I can pretend to be Pee Wee Herman from Big Top Pee Wee when he eats the meal Midge prepared for him! 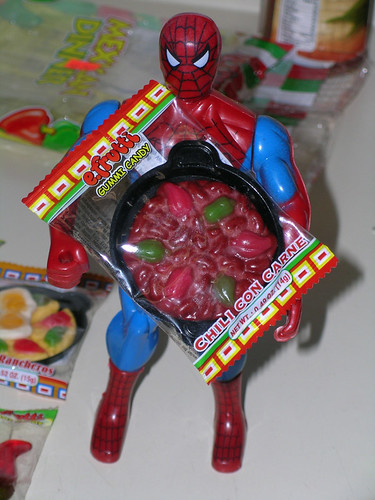 I also loved buying this Spiderman figure. See there was this one booth that was all girls under wear at like 6 for $5 or something and under the table was a box of individually packages super hero figures marked 2 for a $1. I rummaged through the box and pretty much all they had were Power Ranger knock offs and like 20 of these Spiderman toys that had two spider symbols on his chest for some weird reason. So I brought one up to the table with my 50 cents ready and the guy started yelling “No! Two for Dollar!? over and over. I kept trying to pay for one, but he kept yelling, so I ended up buying two. I’m guessing he had some kind of OCD with numbers and he couldn’t stand to see one Spiderman sold with out a buddy…

Oh well, it was a fun day all around and now I can finally protect my family from Cobra and the various scattered ninja that are plaguing my small southern city of Duluth! 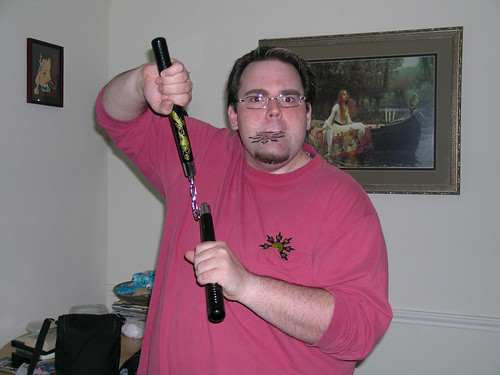 Day 4 of the Halloween Countdown: Some fine British horror classics!