So this has ended up being a much longer list of reviews than I thought it was going to be. This is the second to last of them though, and a double whammy at that. These last two entries will cover the more long running and original frozen soda drinks.

This entry is going to cover the Icee and its sister brand the Artic Blast. Before I started these reviews I knew next to nothing about the history involved in the frozen soda drinks outside of the fact that Slurpees have been around for 40 years, and I only know this because of the commemorative keepsake cup series they did last year. Well as it turns out, the Icee is the grand daddy of all frozen soda drinks.

As the story goes, Omar Knedlik who owned and ran a Dairy Queen in Coffeyville, Kansas in the 1950s, invented the frozen soda drink. Depending on the telling of the story, he either didn’t have a soda fountain machine yet or it was broken and he needed to supply his thirsty customers with cold soda so he took to sticking bottles of soda in his freezer. One day he left them in a bit too long and the bottles half froze, but being the soda-serving lovable guy he was, he gave them to customers anyways. Well everyone apparently flipped for the half frozen sodas, which consequently have almost the exact same consistency as today’s Icees and Slurpees. Since the customers were so taken with the novelty sodas, he decided to devise a machine that would dispense half frozen soda.

Once again the story gets cloudy, but Omar either couldn’t come up with a design himself or his design wasn’t adequate so he contacted the John E. Mitchell Company, a Dallas machinery manufacturer, in 1959 to help him realize his dream of a frozen soda fountain machine. According to the Slurpee website, Mitchell was very taken with the idea and his big advancement for the machine design was to being working with automobile air conditioners to freeze the syrup and water mix. Together Mitchell and Knedlik began building the frozen fountain drink machines and then sold them to other Dairy Queens and convenience stores under the branding of the Icee.

Depending on the brand history you read (Icee or Slurpee) the machines were either very successful (Icee’s version of events) or a failure (Slurpee’s version of history.) Either way a 7-11 storeowner ended up in Omar Knedlik’s Dairy Queen and ended up buying three machines for the 7-11 Corp. So 7-11, after tweaking the design of the machine, introduced Slurpees to the public.

Both drinks went on to flourish and basically became the standards upon which all others have been derived or judged (in my humble opinion.)

So like I said, this entry of Frozen Drinks 101 will cover the Icee and the Artic Blast. I was always under the impression that the two were different brands, but they are in fact the same product under different names. Up until recently I had only seen Artic Blasts at movie theatres in the area so I was figuring that maybe that was the reason, that maybe Icee licensed their brand to like AMC or something, but then when I decided to hit the local Target for an Icee to review they only had Artic Blasts. So I have no idea why there are two brandings, and the Icee website doesn’t have any info on that. Oh well. I managed to find an Icee at a local Shell gas station so whatever. I’m going to review both though for reasons that will become apparent in a minute.

First we’ll start with the Icee though. With the famous polar bear in a sweatshirt branding, the Icee was definitely the second frozen drink of choice (behind Slurpee of course) growing up in Florida. The main reason for this is location because I doubt that I had developed my now keen sense of distinguishing between flavor and consistency at the age of seven. When I did have them it was while visiting K-Marts, which my mom rarely seemed to go to. Back in the 80’s there seemed to be more choices as far as non-food shopping went. Whereas today you pretty much have to choose between places like Targets and Wal-Marts which are both the same but different, in the 80’s there were more places like Ross, Service Merchandise and stand alone Sears stores and stuff.

Anyways, I didn’t have that many Icees growing up, but recently, recently I’ve almost overdosed on them now that I know they are at a gas station on the way to work. The basic set up by work has three flavors, cherry, blue raspberry and Coke. Once again, I’m going to stick with coke for the review for consistency’s sake. 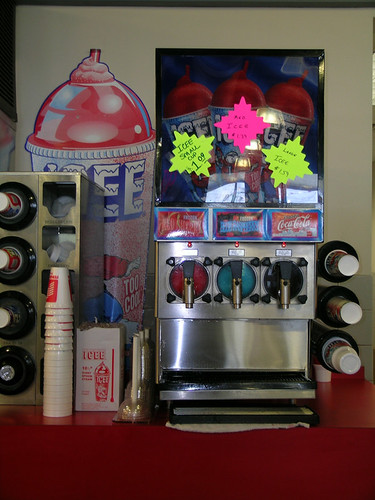 Though the machine in the above picture has all the defrost lights lit, rest assured that it was from a different day than when I picked up my first Icee in years. The first thing that struck me about the Icee was just how smart the branding is on the product. Not only is it the only other brand outside of Slush Puppie to use a cartoon character as a mascot, but also its color scheme is so basically American that it isn’t funny. Red, White, and Blue all the way. Adding the basic Coke flavor, this should be temporary re-dubbed the Freedom Slushie. 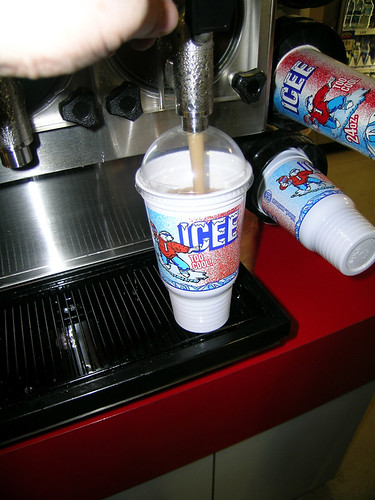 Okay, as far as the consistency is concerned, the Icee is pretty damn good. It’s got use enough ice and syrup that it’s almost always on the brink of becoming a liquid so every slurp sort of melts in the straw and it’s a lot like drink the perfectly cold unwatered down coke. It’s a pretty interesting aspect to the drink that puts it a little more in function over form category of frozen drinks. Whereas the Race Trac Frozen Drink is frozen all the way up the straw, brain-freeze inducing and a little harder to drink, the Icee is more like the perfect fountain drink. I can see this in the company history of the story and it seems to be that way to this day. 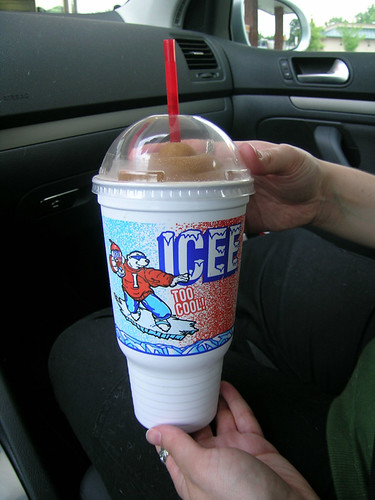 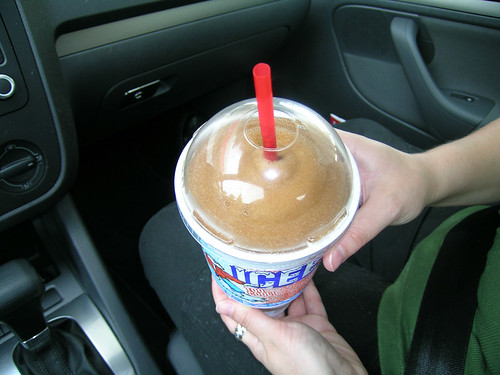 I did end up trying the cherry flavor recently when the Coke was on defrost in the morning and I was also pleasantly surprised by the non-cough syrup flavor it had. It tasted pretty much like your basic cherry candy flavor, though a little more soda like. 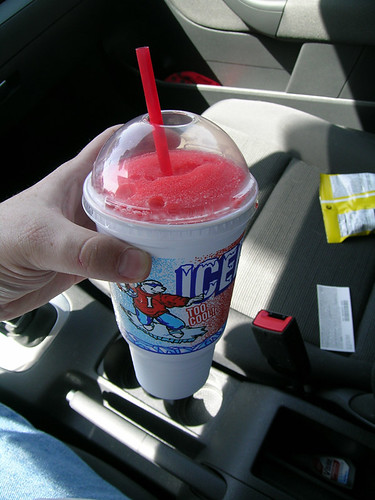 Now onto the Artic Blast. I wanted to cover this drink mostly because it broke one of the main conventions of frozen flavor drinkdom that I don’t think I’ve ever see done, it was available in Pepsi and not Coke. Gasp! Say it ain’t so Joe! As far as soda is concerned I’m not really in one camp or the other in terms of company loyalty. I can surely taste the difference, but sometimes I’m in the mood for a Coke and its rich syrupy bite, while sometimes I’m more in the mood for a Pepsi and its crisper cleaner less sweet taste. I’d just as soon pick up a Mellow Yellow as a Mountain Dew, and I pretty routinely avoid Dr. Pepper and Mr. Pibb both. I know from sodas, but the one thing I never really thought about is why you tend to always find frozen soda in Coke not Pepsi branding. 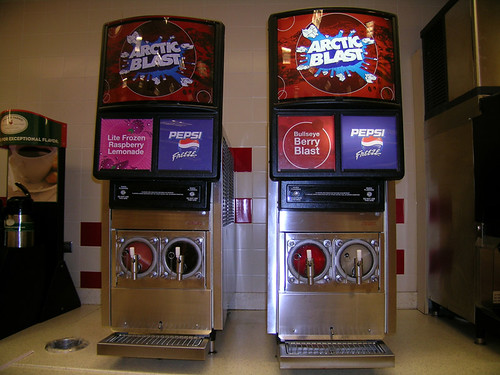 Well excitedly the fiancee and I marched right up to that machine and poured out heaps of frozen Pepsi fun into our Target branded cups. 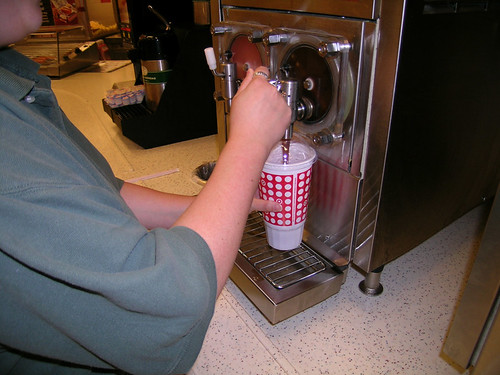 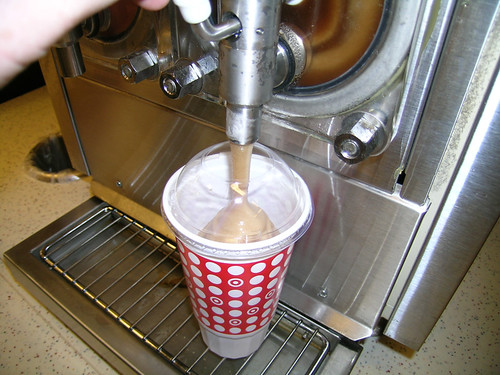 In fact we were enthusiastic that we fell prey to the most common of frozen drink faux pas, the amazing growing slushie! 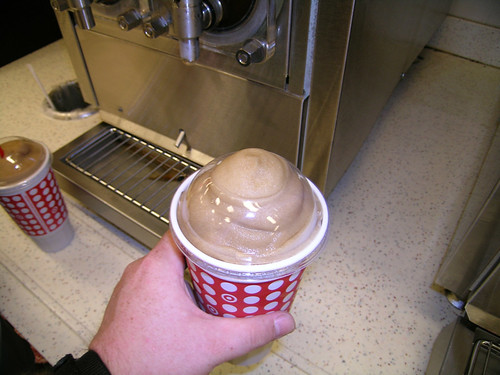 If you’re not careful the drink will continue to expand right onto the counter and all over your hands while you’re trying to save that precious drink. 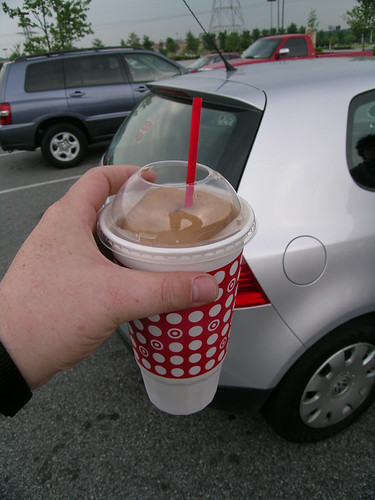 Upon taking my first sip I realized why Pepsi is hardly ever found in frozen drink form. It’s too watered down to make a good frozen drink. That’s inherent in the soda itself as the syrup is less sweet than Coke and therefore when it’s frozen and it has to contend with the extra water (in the form of ice mind you) it makes the final taste rater watery. Part of this, I believe, rests with the Target version of the Artic Blast it self because all flavors at all Targets I’ve sampled are a bit on the light side when it comes to syrup. Target was the only place for a long time that I could find a frozen Mountain Dew, though it lost all the punch of the soda in the process, unlike the Mountain Dew Slurpee which is ten times better than the Artic Blast version. 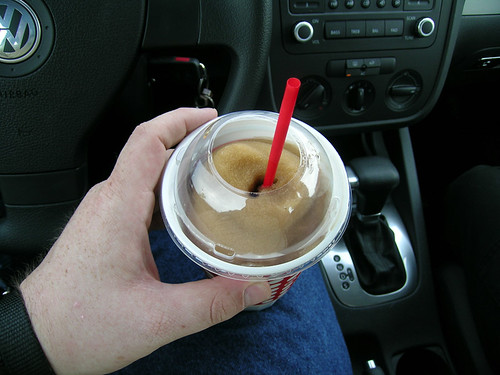 The odd flip side to this is the difference between Artic Blasts at Targets and AB’s at AMC movie theatres. The movie theatre ones are much better as far as consistency and taste is concerned. So I don’t think it’s a brand thing as much as a location thing, and Target apparently isn’t the place to get the optimal version. Of course it’s freaking expensive to get into the movie theatre these days and there aren’t a lot of reasons (e.g. good movies) to bother, so the theatre Artic Blast is truly a treat that’s only available to me a few times a year.

Thus ends my frozen drink reviews for the time being until my next trip to Florida when I’ll cover the Slurpee in extreme detail. So once again, here are all the past reviews:

Silverhawks, Part 1: A Rainbow in the night…

Doesn’t that boy ever put pants on?