So have you ever been bored one night, broke into your closet and dug out a bunch of stuff you’ve had squirreled away for like 10 years and wondered, what the hell was I thinking?  Well I did that last night and found some of the “art” I had done in high school and the following year after I graduated when I still had visions of self-published comic books dancing in my head.

I’ve always sort of wanted to publish my own comics, but I am not comfortable enough with my drawing ability to take the plunge.  That’s why I opened the Deviant Art account and starting putting my drawings up there, to get feedback and sort of publish them online.  It’s also probably the driving force behind this blog and my podcasts, as it’s they’re two of the few creative outlets I have today.

So while I was digging up stuff I compiled a bunch of drawings and other stuff related to this story idea I was working on for a comic book about 10 years ago and I thought I’d share them with the blog.  The basic idea behind the story was that a mega corporation that specialized in a chocolate flavored beverage was secretly trying to take over the world through old B&W TV shows that they had the copyrights to and were placing subliminal messages in.  The crux of the story lay in the idea that to get people to watch old B&W shows they would have to first take color out of the equation.  To do this they implanted tiny transmitters in their chocolate flavored drink bottles that when drunk would travel up to the optic nerves of the people who drank it.  The transmitters emitted a signal that only the population of Lillyput from Gulliver’s Travels could hear, and as the mega corporation had already enslaved this race of people (they’re really small and easy to defeat for anyone who isn’t Gulliver apparently) they would use them to creep into people’s homes at night (following the signal) and using tiny chainsaws they would destroy the color receptors on the optic nerves rendering the victims permanently color blind.  Thus they would have no qualms with watching old B&W TV shows and would be perfectly suited for brain washing.  Confused?  I don’t blame you.

This story idea all stemmed from this one day when I was so bored and listless that I just sat on the sofa watching Nick at Night and ended up drinking an entire six pack of Yoo Hoo bottles.  As I finished the last bottle I started to fiddle with the packaging, taking it apart carefully and reading absolutely everything on it when I saw the most disturbing piece of info ever on a six pack of chocolate flavored dink packaging, “Destroy All Colors.”  Sure it’s probably some sort of manufacturing lingo associated with where the yellow coloring was supposed to stop on the cardboard, but I saw it as a slogan or an intent.  It freaked me out either way. 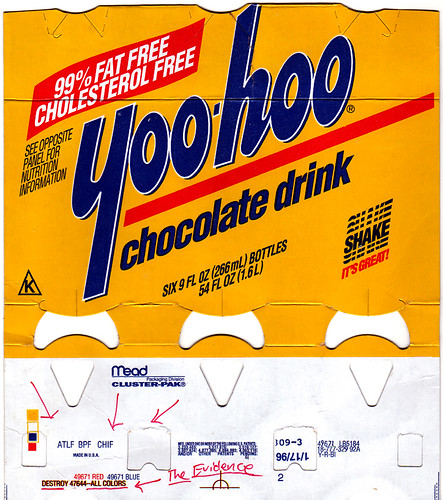 I hit me that this would make a really wiggy comic book, and since a group of friends and I were planning on starting a comic book company I thought that this would make a great book for my quarter of the output.  First though we have to back track a little bit. See I already had an idea for a comic book revolving around this character named Blast that was every Jim Lee and X-Men character ever rolled up into one neat package, or so I though.  I had a couple of ideas for the character, I envisioned him being stuck inside his outfit like it kept him alive or something and I always wanted him to have his arm cut off in the first issue he was in.  Ohhh, dramatic. 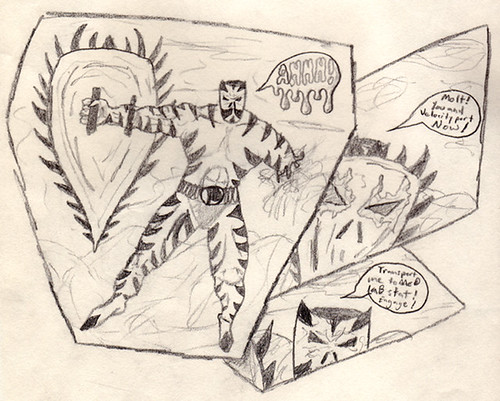 The above picture is one of the earliest drawings I have of him from like ’93 or so, and yes he’s getting his arm cut off.  Man was I obsessed with tiger stripes and spikes or what?

Anyway, I did a few more doodles and then sort of stopped for a while as my friends sort of cooled off on the comic company idea.  Well in the interim I revived the character for a contest that Erik Larsen held in the pages of Savage Dragon for featuring a fan created character in the comic.  I revamped his suit and gave him a spear instead of a shield and did my best on coloring him with prismacolors before shipping it off to Mr. Larsen (of course with a SASE included as I didn’t want to lose the beautiful artwork I was submitting.)  Well needless to say I didn’t win as Larsen was instead enamored with a giant Popeye-talking lobster character, but then I was so just making an Image character stable clone that I’m not in the least surprised.  Here is that picture.  I was so happy with how the gradient-like color acme out on his energy seepage. 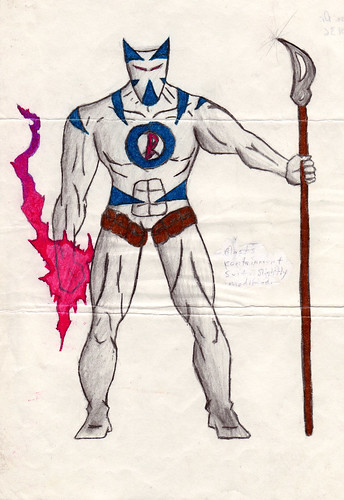 What I think is kind of funny is that when I got the picture back it had this weird brown smudge on the back.  I was so pissed at Larsen for years after that, like he had no respect for my Art or something.  What a weenie I was. 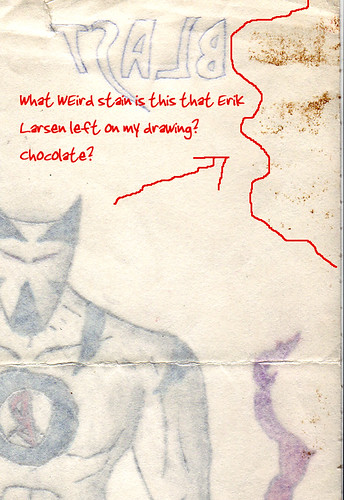 Well sometime after that I came up with my second original character, Justice.  Basically on day while a friend of mine and I were bored we cut out the sleeves of an old T-Shirt to make Luchador like masks for our faces.  I painted a big J on mine and called it my Justice mask.  Well it sort of stuck with me and I morphed the idea into a character who was just a basic Joe everyman who had, had just about enough of the evil that the world had to dish out and decided to become a vigilante.  He donned the T-Shirt sleeve mask and named himself Justice and went out at night to battle injustice on the streets with a baseball bat.  Oh how Casey Jones can I get.  It was around that time that I refined Blast once again and drew both characters with my new and improved prisamacolor and micron pen skills. 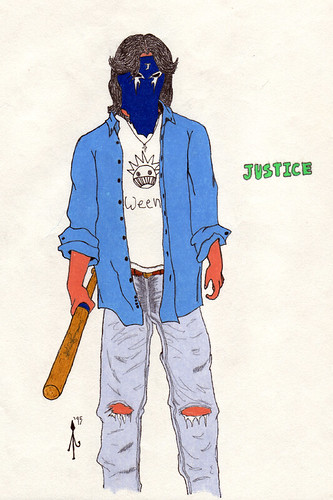 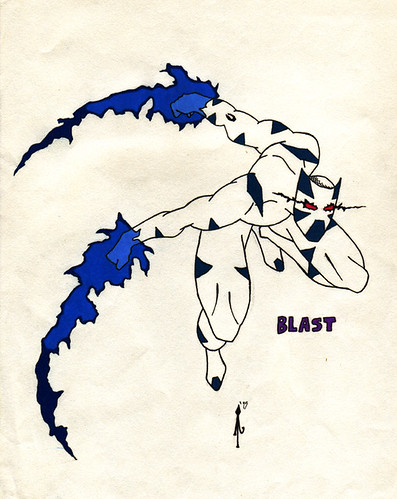 It was around then that I also decided to revive my Yoo Hoo Conspiracy story, so I wrote up a manifesto to explain the whole thing, because that’s what dorky comic nerds do. 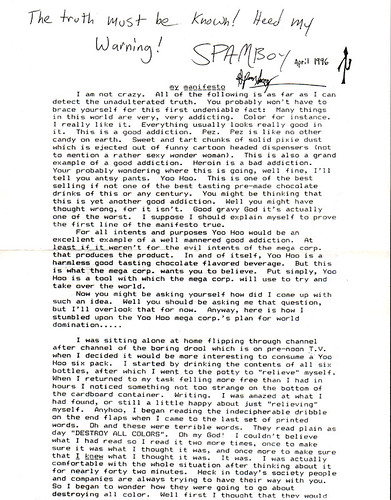 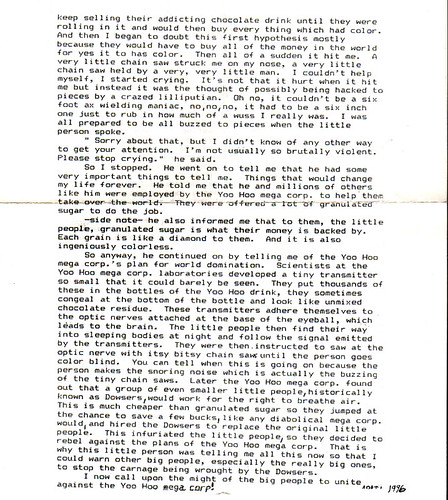 It was at this point that I was sure I would actually publish this in comic form and I agonized over 7 pages of a comic.  I say agonized because I have a seriously hard time with drawing the same character over and over again and having him look the same.  I’m just not that good at sequential art. Here are pages 5-7, all that I could find that’s left of the comic. 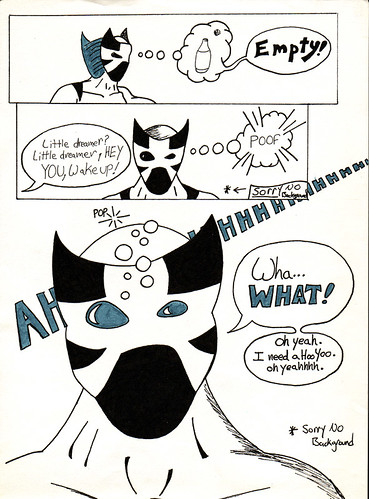 I was so influenced by the Tick and Ambush Bug at this point that I was trying to stick humor in where my drawing abilities failed me like the “no background” gag.  What the hell was I thinking?  I also envisioned that at this point Blast would be old and fat and still stuck in his suit to keep him alive so he’d eat and sleep in the costume. 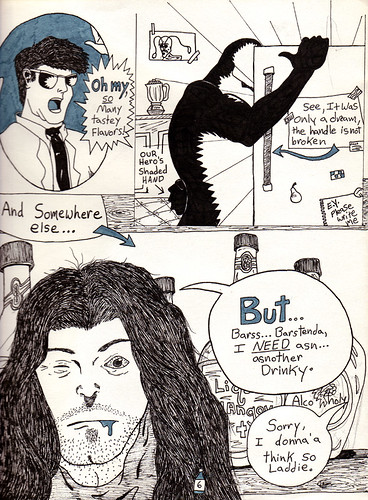 That drunken character is Justice, who I also tweaked just a bit to be a lush.  Why?  I don’t know, I guess it just seemed funnier that way.  I also introduced a Max Hedrom-like narrator character at this point to make comments on stuff like the contents of Blast’s fridge. 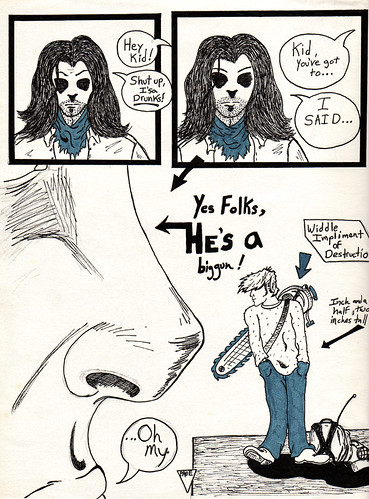 I stopped on the Lillputlian because I didn’t know where to go from there and because drawing 7 consecutive pages back then was a ginormous achievement in my eyes. 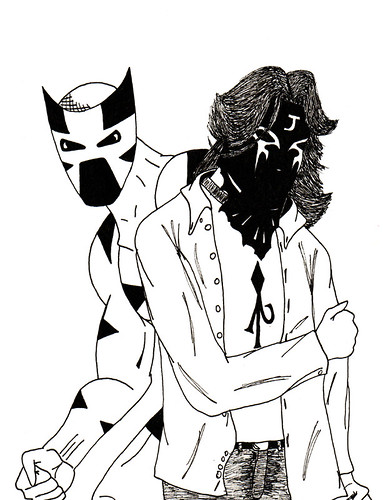 The picture above is the last time I drew either of the Yoo Hoo Conspiracy characters, all Batman and Robin like even.  It was at this point that the story (of making the comic not the actual comic story) became the most interesting to me because it was around then when I started going to college.  Having full run of the computer lab I put up my first archaic website that was an explanation of the entire Yoo Hoo Conspiracy, though for some odd reason I forgot to add anything about it actually being a comic book.  Well about three months after I had the site up I was contacted by someone very high up in the Yoo Hoo company about the site.  No on the one hand it was kind of scary because some huge company was watching my Yoo Hoo movements.  On the other it was completely flattering because the guy found the premise of Yoo Hoo trying to take over the world through colorblindness funny.  We had a few conversations through letters and even though I never did find out what the “Destroy All Colors” deal was on the packaging, I did receive a bunch of free swag like pencils, a T-Shirt and a butt-load of stickers.

I pretty much gave up on the idea then as college mixed with a full time job meant that I didn’t have time to draw.  So what were you doing a decade ago?