Thatsa creamy frozena drinka! Today’s entry in the textbook of Frozen Drinks 101 is a double whammy as we take a look at the Burger King Coke Float and the Sonic Creamslush! I was introduced to the BK Coke Float before Sonics started popping up so I guess we’ll cover that one first.

Now I am no stranger to the float as a drink, and even sort of grew up on coke floats in general, but I have always known them to be a mixture of vanilla ice cream and regular sodas. Now I love me a float, but I’ll be honest, making them at home is an art unto it self. I am not sure if it’s an order thing (to add coke or ice cream first) or a “brand of ice cream used” thing but every time I’ve ever made a float the same problem happens. This nasty unappetizing foam forms on the top that continuously grows for minutes, obliterating most of the soda and taking a good five minutes out of the drinking process while I scrape it off into the sink. It also seems to separate the color additive from the soda so that the leftover soda is clear (and as anyone who partook in that Crystal Pepsi debacle a decade ago can attest to, clear soda that isn’t limon in flavor is a scary thing indeed.) I was raised on Breyer’s which is about as basic as you can get (I believe the ingredients listed are milk, cream, and sugar.) Maybe I need to switch to a more ingredient filled variety, like maybe the all natural goodness of Breyer’s clashes violently with all forms of chemically derived sodas or something.

Anyway, a few years ago, I believe around the time of the first Ice Age movie, Burger King Corp. got the brilliant idea of combining two of their dessert properties into one big frozen creamy soda-y drink movie tie-in known as the BK Ice Age Float. At the time the two available flavors were cherry and some blue fruity thing that wasn’t blue raspberry. At first I thought that the drink was an abomination, that soft serve ice cream surely would do nothing but mar the perfectly fine frozen drink flavor. Boy was I wrong. Today the float seems to be a seasonal item and it’s pretty basic as far as flavors go, being the creamier version of a frozen Coke or Fanta. 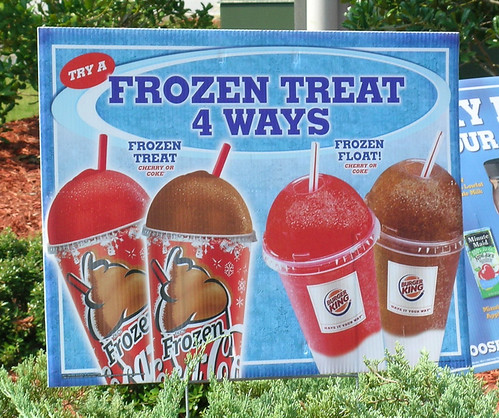 I decided, as you can read in my review of the BK Frozen Coke, that since their Fanta cherry is pretty crappy that I’d just go with a basic Coke Float. Let me tell you, as watered down as the normal frozen Coke was, the addition of soft serve vanilla ice cream is exactly the kick their frozen drink needs to get it back up to mega tasty. 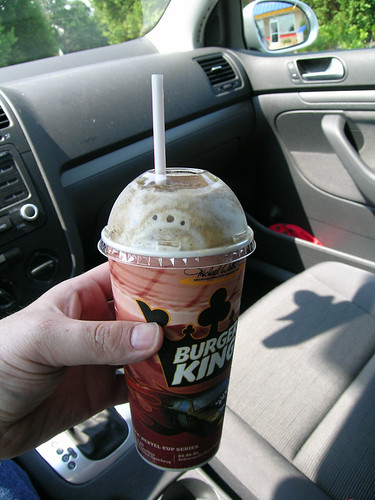 It might be kind of hard to see in the picture because I was gypped and was served the drink in a paper cup instead of the clear one advertised in the sign above, but the drink is basically frozen Coke layered on top of a bed of soft serve. The awesome thing is that whoever poured this monster was bright enough to mix it up a bit before handing it off to me. That makes all the difference in the world as far as this type of combo is concerned. See if they didn’t do that all you’d get when you sucked up through the straw would be soft serve. That’s how it was when I was first introduced to the drink, and it was cool, but not great. 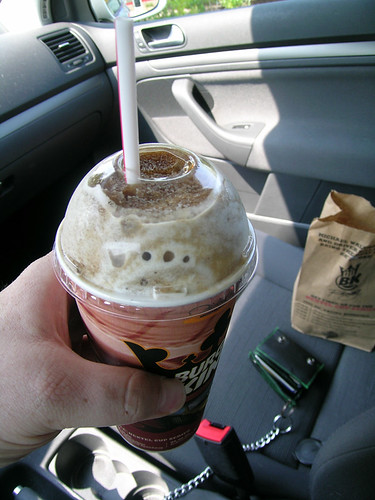 The only drawback to this drink was that it’s best when firm, and the more it melts the less appetizing it gets. I guess melted soft serve isn’t exactly as cool as the ice cream soup I used to make as a kid. 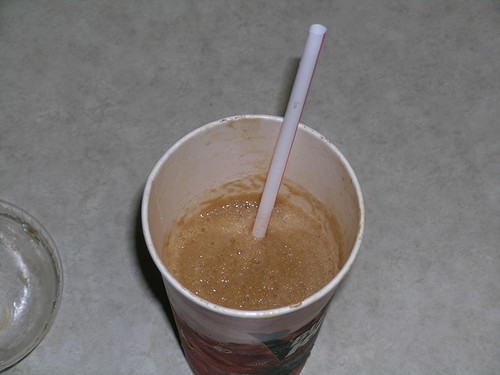 As you can see in the gross picture above, if it takes you more than 20 minutes to down one of these bad boys then you’ll most likely be left with a watery, foamy mess of a drink that resembles that nasty homemade Coke float foam I was talking about above.

So a very similar drink, just not carbonated and a lot fruitier is the Sonic Creamslush. Basically it’s the same deal as above except Sonic blends any flavor slush with soft serve to form a rich creamy, well creamslush. 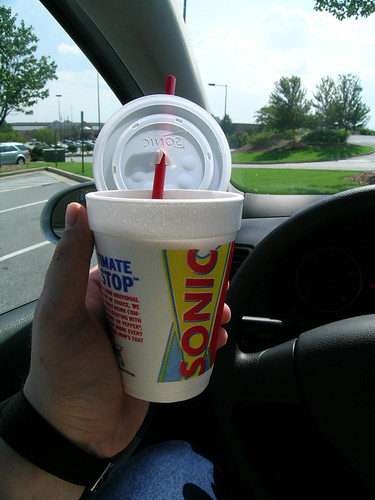 I tried my damnedest to get a grape creamslush, for one because grape cream-sicles were my favorite and two because I haven’t had a purple drink in any of these reviews. Well unfortunately they made this one heavy on the soft serve so a lot of the color was lost. 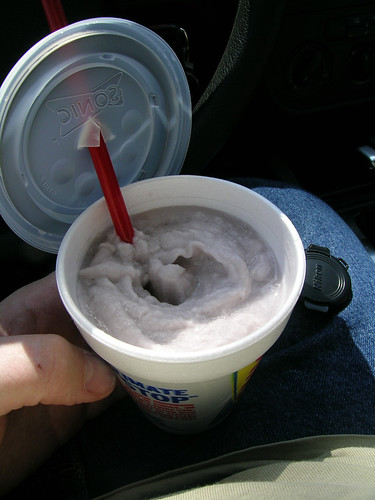 Whatever the color these are awesome frozen drinks. Whereas the Crush Frozen Orange Dream drink tried to taste like a cream-sicle but only ended up tasting suspiciously like orange flavored children’s aspirin, all of the Sonic versions of the creamslush taste awesome. The only one I haven’t tried is green apple, because creamy and sour seem like a bad combo, but I’ll bet it’s better than that Orange Dream piece of crap.

Once again, like the BK Floats, the drink is on a time limit. Because it’s made with soft serve it’s got a limited shelf life before it gets melt-y and gross. Luckily for the consumer (and unlucky for the environment) all sonic drinks are served in Styrofoam cups so they are pretty well insulated from even the hottest summer heat and therefore can last up to an hours before they get gross. If you can’t finish your frozen treat in that amount of time though maybe you should just consider drinking water.

Join us next time when we get exotic and cover Vietnamese slushes!