Here is another stunning nostalgia food review, and this week it’s guaranteed to make you queasy ’cause folks, the pictures are not tummy tempting.  Growing up we hardly ever ate out or went to fast food places.  My mom was great about cooking the family dinner most every night and the nights when she didn’t quite feel like cooking we still had something that was remotely “cooked” at home (like those weird old Land-o-Lakes Turkey loafs with gravy, pot pies, or every once in awhile Swanson TV Dinners.)  No one in the family was eating them because we were under the impression that they are culinary delights (though the desserts sometimes were), but like most people we ate them because of the ease and novelty of eating a pre-made, compartmentalized, well-balanced, frozen dinner.

Very early on I developed a taste for the Salisbury steak variety.  There was just something awesome about all the brown gravy and the mashed potatoes; it was like eating a hamburger without the bun, and breaking the rules was fun.  I also learned very early on that I could only eat Swanson brand Salisbury steak, as every other brand I tried just didn’t cut the mustard (they tended to be gritty or way too soft.)  Very quickly I also graduated to the Hungry Man variety because those came with desserts, and since that was another thing my family wasn’t big on, it was mighty welcome in my frozen dinner.

So in honor of Movie Night and because I found two Salisbury steak Hungry Man dinners on clearance at Target, it was time to chow down on some seriously frozen grub.  Our adventure starts in the artic cold of my apartment freezer… 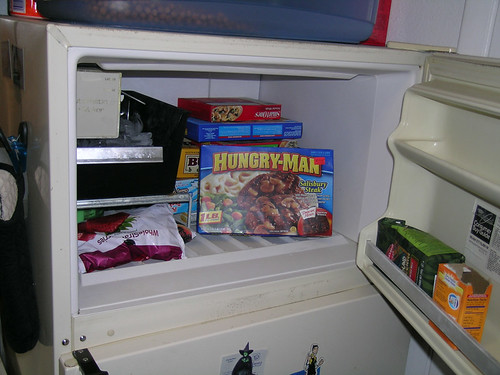 Though the dinners were on clearance they had a year to go before expiring, so I had no fear of serious freezer burn or anything.  These were two freshly frozen dinners.  If there’s one thing I regret about this new habit of documenting these dinners it’s that I always manage to get swept up in the moment and I forget to take all the pictures I had planned on.  This night, I forgot to get a picture of the dinners in their frozen state, which normally wouldn’t be that big of a deal, but both of the dinners had dollops of mashed potato frozen into the brownies and it was pretty gross  (but during cooking they mysteriously disintegrated or managed to jump back into the mashed potato cubicle because they were no where to be found.)

We now join our dinners as they’ve just emerged from the oven to perfect doneness. 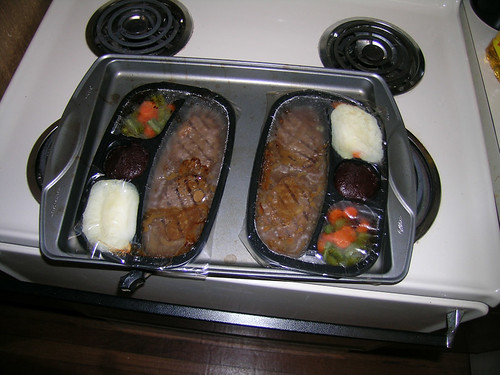 Here’s a close-up of just how disgusting a freshly cooked Swanson Hungry Man dinner can look.  I say disgusting because there is a strange brown juice that’s accumulated on the film above the green beans and carrots, not to mention the static cling of the film against the Salisbury steak itself. 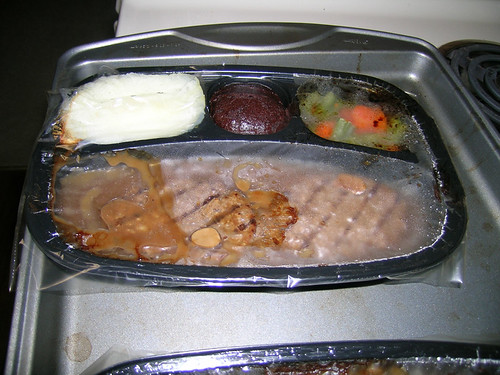 Once the plastic film is removed the dinner’s appeal doesn’t improve all that much.  Though I loved it as a kid, the image of these two “steaks” swimming in a pool of greasy gravy is kind of gross.  But damn if it didn’t smell good, like just coming home after a long trip.  So there is hope yet. 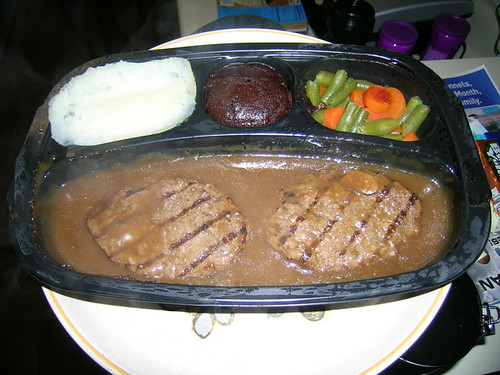 Now my friend decided to take the one at a time approach to tackling this dinner of hungry men, while I just dug in willy nilly.  There’s no right way to eat a Swanson Hungry Man dinner.  I’m glad to report that the dinner is exactly the same as I remember it tasting as a kid.  The meat is perfectly ground so that the consistency is meaty but not gritty or tough, and the gravy is heavenly if not very obviously greasy, though it is abundant which is a testimony to the Hungry Man branding.  There’s enough gravy to go around here folks, and pretty much every inch of this dinner could be covered if that’s what you wanted. 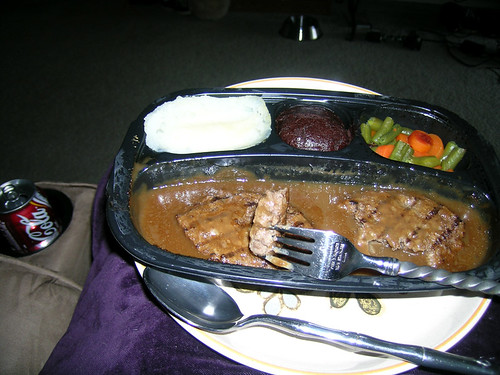 I didn’t let myself get too crazy with it, but I did make sure to spread it around on the potatoes which, though exactly as I remember them, were a little tasteless.  I’m a big fan of instant potatoes because of their alluring silky texture, but TV dinner potatoes have a lot of pitfalls that keep them from being good.  They are almost always overdone and then they sort of get gummy and crusty at the same time, which is both weird and disturbing.  I think frozen food scientists need to develop a solution that goes a little farther than cutting the plastic away from them before cooking.  How about a perforated plastic bubble that keeps enough moisture in while letting enough out so that they aren’t soupy? 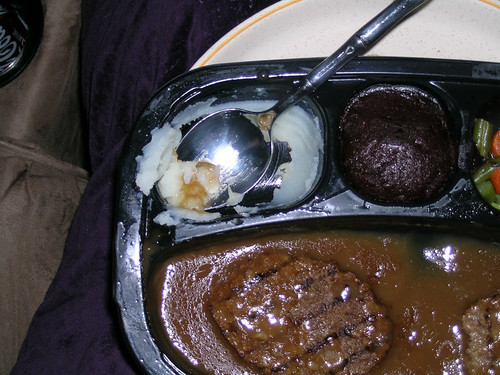 I decided to be a good boy this time, and for once I ate my desert last.  When I was a kid that was always the first thing to go, mainly because Swanson’s used to have various cobblers in with their meals and they were best piping hot.  Since this variety now comes with a brownie I felt that I could hold off on my indulgence and save it for last.  You’ll also notice that I left most of my veggies uneaten.  This is another common trait I have while eating frozen dinners.  Typically I can’t stand most cooked veggies unless they are part of something like soup or a casserole and in particular I do not like my carrots cooked.  I tried to choke down most of the green beans, but there’s only so much a man can do, you know?  Surprisingly the brownie was pretty darn good.  It wasn’t overdone like most the frozen desserts tend to be and it was pretty brownie-like in consistency (as opposed to cake-like.) 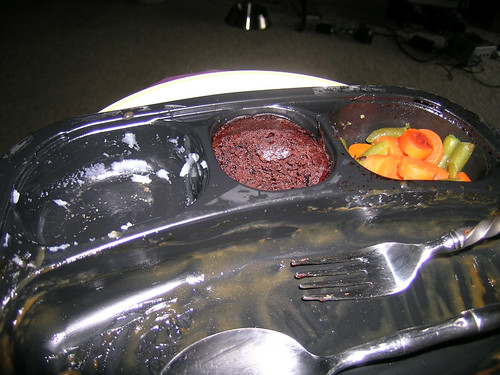 All in all, the dinner was pretty darn good and every bit the comfort food I remember it to be, though to be honest it isn’t good food by any stretch of the imagination.  It was just as good as it was designed to be though and that’s good enough for me.  I was also surprised at how not full we were.  Both of us figured one Hungry Man would be quite enough to fill us.  Well after the first movie we watched we were sort of wishing we’d gone for seconds.  On the other hand the Hungry Man XXL variety scares the jebus out of us.  Those things have enough sodium and fat to last a week and they are just too indulgent.  Maybe they need to develop a Hungry Man XL that’s somewhere in between where you can truly feel full without upping your chance of heart disease by 300%…

I hate it when a plan doesn’t come together…