Okay, so now we’re sort of getting to the end of the first year of Frozen Drinks 101. I’ve searched near and far for everything that even possibly resembles a Slurpee in the north Georgia area (which is why I won’t be covering the various milkshakes and Wendy’s Frosty-like drinks since these are not Slurpee like at all.) We’re entering the home stretch and there are only a few articles left.

Today brings us to a very odd entry in this slush/Slurpee debacle. I’m not sure exactly what this concoction is called outside of the individual flavor names, but for sake of ease I’m going to call it the Frozen Misc. Float. I’ve only ever seen this machine at one place, this tiny generically named Food Mart that is part of a small shopping center and isn’t connected to a gas station though that is basically what this is, the generic gas station food mart.

Alas, back to the frozen drink at hand. Basically like I said above this is a Float related machine that has two flavors (one of which that apparently rotates.) When I first stumbled upon the machine it was IBC Root Beer Float and Crush Orange Dream flavors. Soon after the root beer flavor was replaced by another Crush Flavor, Strawberries ‘n’ Cream. 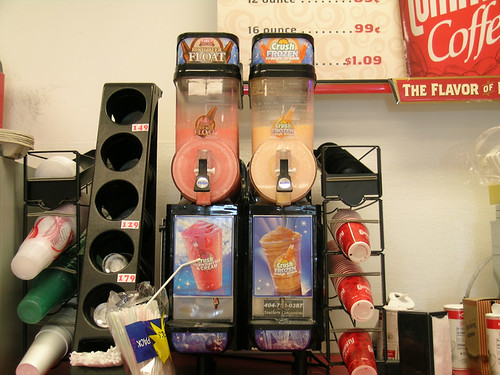 The first thing that sort of confounded me was the various brandings on the cups. As you can see in the below picture, there is a Slush Puppie logo, and since the drink has a very SP like consistency, I figured maybe it was just a major label of carbonated flavored Slush Puppies or something. The cups though, have like four other brandings on them that I’ve never heard of, and none of them are IBC or Crush, which leads me to believe that the cups may not match the drink machine. I mean this is a generic Food Mart and I wouldn’t put it past them to just use whatever cup stock they found lying in the back alley after closing. 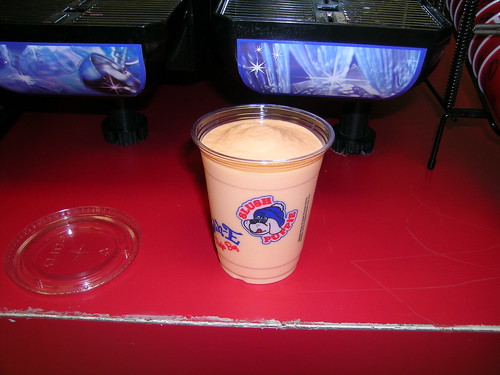 I had previously tried the Root Beer flavor and since it wasn’t available I decided to go with the Orange Dream flavor for this review. Though I am hard pressed to say any frozen drink is the worst frozen drink ever, I think these would be a good contender, right up there with the Popeye’s Chillers. Basically, like I said, these have the same consistency as a Slush Puppie though they are carbonated and are very creamy. I guess it’s supposed to taste like a melted Orange Cream pop, but at the end of the day it just tastes like a bunch of orange flavored children’s aspirin crushed up and mixed with milk and ice and that’s pretty darn gross. I don’t know what it is about frozen drinks and their medicinal taste. Maybe the taste scientists are Nyquil addicts or something. 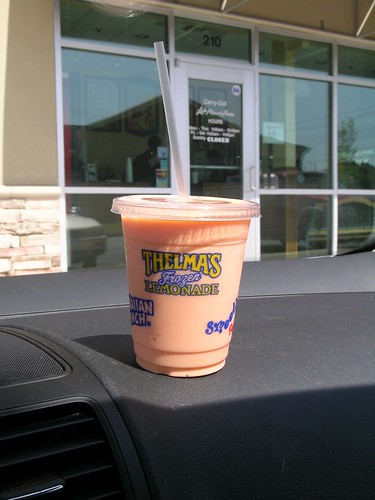 I’m almost afraid to try the Strawberries ‘n’ Cream flavor, and at this point might just give these up as they haven’t been good yet. The Root Beer was alright, but amazingly watered down and at the end of the day I’m just not a big fan of the “hardly and ice” slush. Once again the below photo is misleading as all the ice has gathered at the top. 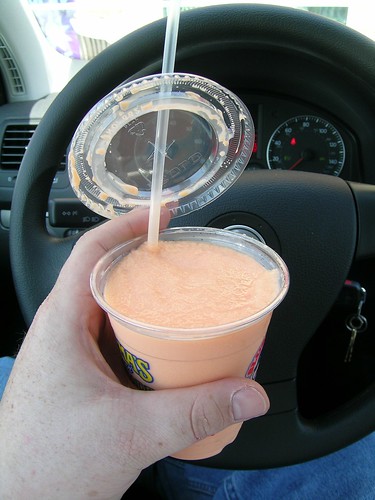 Join me next time when I tackle other milk related Frozen Drinks from the BK Frozen Float to the Sonic Cream Slush.