I’ve been doing the positive thing for a couple of these Frozen Drink Reviews, so now it’s time to head back to negative land with one of the worst slush concoctions known to man, the Popeye’s Slush, which is part of their new Cajun Chillers variety of frozen drinks. 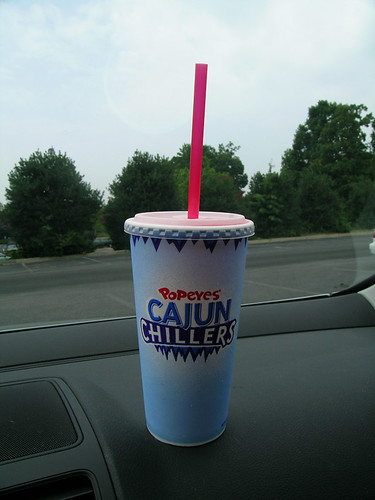 Now one of my main complaints with slush drinks is that you tend to suck out all of the syrup/liquid really quickly and then are left with a heaping lump of useless ice. Well on this front, the Popeye’s slush is the on the complete opposite end of the spectrum. There is hardly any ice in the damn things, though the below picture would make you think otherwise. 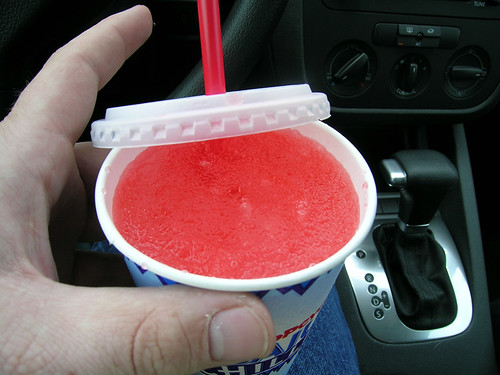 Basically there is about one fourth of a cup of ice in the drink and it’s apparently much lighter than the syrup because it all floats on top of the drink. When drinking it all you get is syrup and let me tell you it isn’t good. It’s really thick in consistency and tastes kinda chemically like almost gasoline-y. The after taste is god-awful and very lasting.

To top this off, the syrups don’t taste all that different between the flavor varieties. There’s a cherry, a strawberry, and fruit punch, and a hurricane punch (which is blue) and they all pretty much taste the same. When these were first offered they had a Lime slush that was awesome as far as flavor goes, but it was still the same thick consistency with little to no ice. I haven’t been able to finish one of these off yet and I think its time to stop trying, the one for this review being the last one I will purchase.

Peel Here #93: A sad substitute for a lack of BJ and the Bear stickers…

Dusting off the podcast…