I was going to do these in the order I originally encountered them, but thought that I should keep the two big gas mega stations drinks together, so today we’re going to take a look at the Race Trac Frozen Drinks.

Now I haven’t really been to any Race Trac’s because they are just starting to pop up in my area, and I’ve been a big fan of Quik Trips for a while so it seemed sort of wrong. That is until I sampled one of their frozen drinks, and now I’m thinking of defecting.

First off, and like the QT Freezoni’s, Race Trac has a very large selection of Frozen Drinks. There are 8 to choose from, from your standard Coke and cherry flavors to the more rare watermelon and lemonade. They also have four additional flavors that are in a different style, more like a Slush Puppie, but I decided to concentrate on the more Slurpee like drinks. 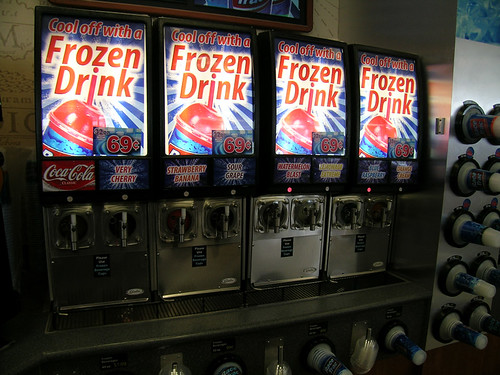 For the purpose of this review I decided to stick to the basic Coke flavor, though I have now tried them all. I didn’t have high hopes as I’ve pretty much given up on finding anything that matches the almighty Slurpee (but I’m also beginning to wonder how much of that is psychosomatic?) As I began to dispense the drink my hopes rose as it came down pretty slow and thick. I had images of the all syrup Squishee from the Simpson’s dancing in my head, and I expected the machine to start rattling and knocking at the sheer power it took to dispense a drink this thick. This was surely no foamee.

I’m being honest when I say that this is the closest to a Slurpee a frozen drink in Georgia has come. And with such an innocuous name like Frozen Drink, I fully expected it to be cough syrupy and horrible. The consistency was perfect from start to end, and it melted at just the right rate. I never had to reposition my straw and only had to shake it once or twice. The straw was also a surprise, being of the spoon ended straw variety, also a feature of the 7-11 Slurpee. 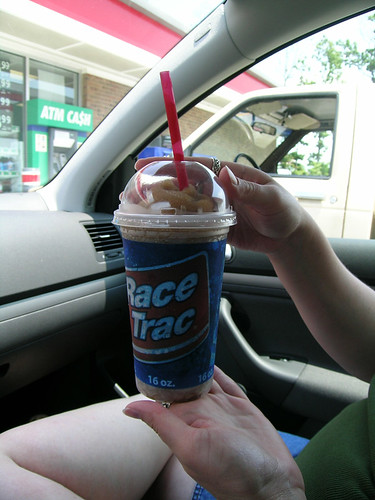 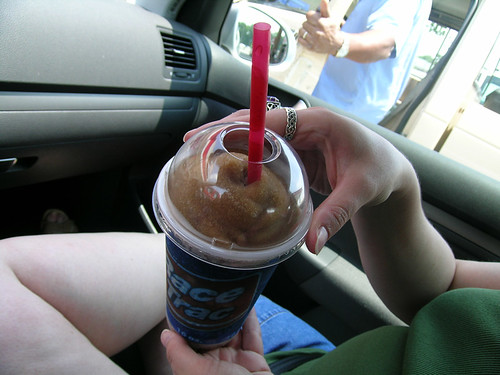 I left that Race Trac a very happy boy with high hopes at finally finding a Slurpee replacement (until I can raise the $159,000 it costs to open a 7-11 franchise.) 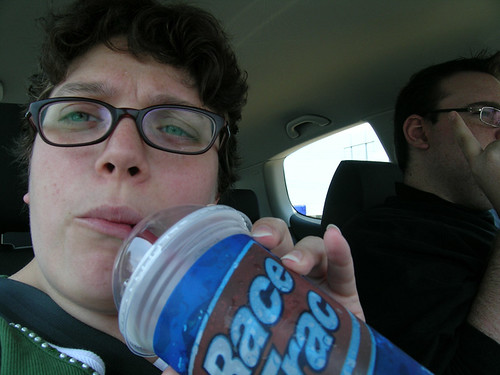 Though this is largely a positive review, I do have to be honest with myself. Since the damn Frozen Drink was so good I ended up going back five or six times since that first drink and to be perfectly honest, the consistency of the quality varies. A couple of the times the Coke flavor dispensed too thick, so thick that it was mostly ice. I’m still throwing my vote in that this is the best so far, but we’ll see in the long run if the consistency of quality holds or not.

Also, as far as the other flavors are concerned, none of the others are really winners. The best of the bunch is watermelon, though it’s a little on the tart side, which is strange considering it’s watermelon flavored, the most non-tart of all fruit flavors. The cherry is hands down the winner for the most cough syrup like flavor ever in the history of frozen drink kind, and the rest are either too chemical tasting or too sweet. I’ll take a good frozen Coke any day though, enough of my bitching.

Cereal Boom is melting my brain!

There’s a little more adventure in the Goonies novelization…