So now we move on to the second possible mascot idea, Jr. Salty2 (the 2 is susposed to be squared, as in 2 squared = 4.)  He’s basically a three chambered peanut where the third chamber on his head is his Siamese twin brother who is half formed and shriveled (thus the squared bit to his name.) Oh and his Siamese twin has Turret’s syndrome. I wanted to get away from the Mr. Peanut look, but it’s freaking hard to do that with a peanut character.

This is the first doodle I did to try and get the concept down. At first I wasn’t sure if I wanted his third nut to be a tumor on his head or a bun in his oven. 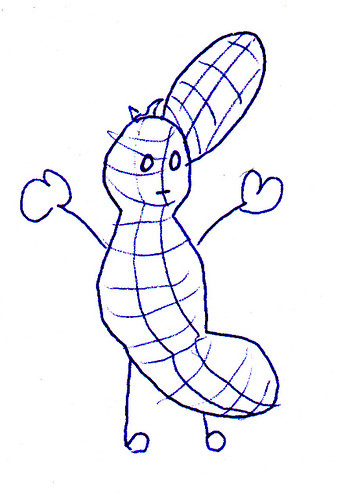 Well, I decided that he could be drawn from many angles and was kind of fun to draw, so I fleshed him out a bit like Clumpy below. I threw some quick photoshop colors on him to get the more finished concept look down. 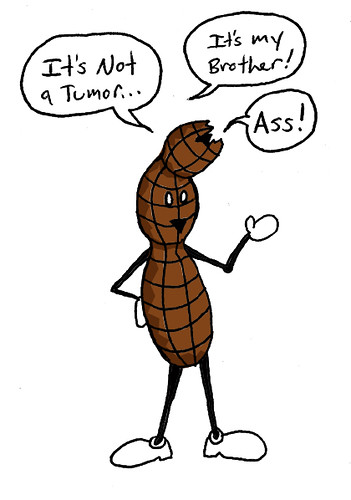 I was pretty happy yet again, like with Clumpy so I decided to try and go to the next step which is a more finished looking drawing, a comic strip this time with him from at least two angles and with different expressions. Here is a bigger version. 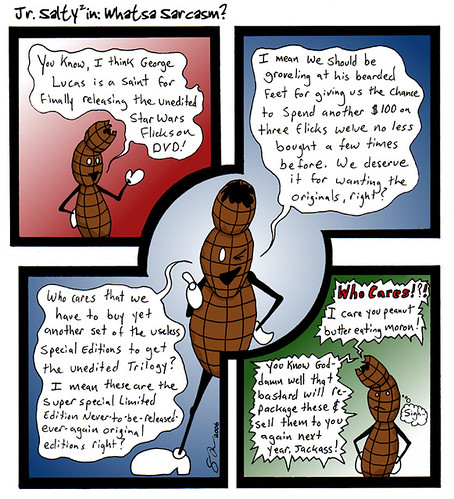 I’m not sure which of these two comes across better. I’m thinking of just using both. Also, I wanted to mention that though I am aware of Aqua Teen Hunger Force, I’ve yet to see more than one episode, and I really wasn’t thinking of that kind of thing while coming up with there. While I was doodling Clumpy I had a hard time not thinking of Meat Wad, what with the one tooth and his unshapely-ness.