Part the last, my round up of 80’s nostalgia candy, or at least what I have nostalgia for.

13). Runts. I admit it; I am one of those people. You know, one of those people who buy Runts specifically for one flavor of Runt. I am a banana man, not THE Bananaman that used to bookend episodes of Danger Mouse and Count Duckula, but the dude that would buy a box of Runts, eat only the banana, flirt with eating the strawberry and Cherry and then would toss the orange and lime away. I even remember back in the day, when this was uncommon, my Dad took me to a flea market and there was this awesome booth set up with Mexican sodas on tap and a bunch of candy by the pound. Well one of the bags was pure banana Runts. I didn’t get it because I wasn’t supposed to have that much candy at once, but it was like the grail that I kept looking for since. Nowadays you can find just banana pretty regularly in vending machines and stuff.

Unfortunately for my friend Kevin who will be sharing these with me and who loves citrus flavored candy, Wonka changed the Lime Runts to Watermelon, so it won’t quite be a perfect trip down Runts lane. 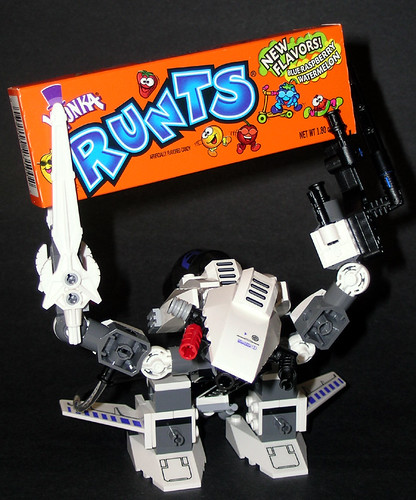 14). Sugar mf-ing Daddies! Yeah, so I only had one Sugar Daddy as a kid and it was the hardest thing to eat ever. It was just so big and immune to the saliva in my mouth. I want to remember it taking like three weeks to eat it, but I’m sure it only took an hour. My mom was a lot fonder of Sugar Babies so we had those around a lot more. I found these mini Sugar Daddies and figured they’d be perfect for movie night. Turns out that the formula has changed because these went super quick. 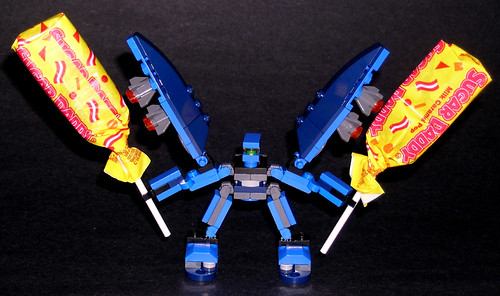 15). Orange Tic Tacs! Are they a candy or are they a mint? I’ll lean towards candy as a pack of Orange Tic Tacs lasted about 55 seconds in my hands. These things were addictive too. I remember in high school, my friend Jeremy had found this mega box of individually wrapped Tic Tacs and I was so jealous. I’m glad they still make these. They even have Lemon, Lime and a Citrus combo now. 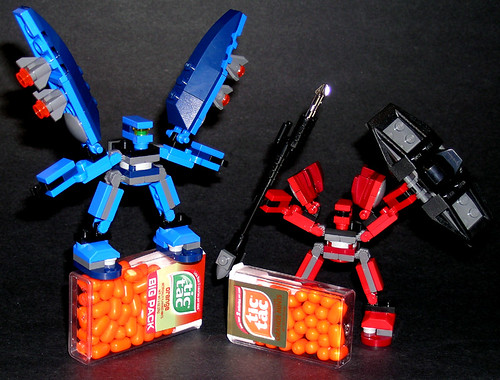 16). Warheads! I don’t think I was introduced to these until high school, but I think I was only in the 9th grade, so that’s close enough for nostalgia’s sake. For some strange reason Sour became the flavor du jour in the early 90’s and it’s had the staying power only rivaled by Cherry flavored products. In fact now it’s sometimes hard to find non-sour versions of candy products I know and love like the squeeze lollipops and most gums. Warheads were the penultimate sour candy. You can scream about Crybaby’s all you want, they weren’t nearly as volatile as Warheads were and they had the art down to a science. On the back of the candy wrapper it gave the timeline of just how long the candy would be mega-sour, it was like 20 seconds, and then you’d get to the plain candy center. Like habanero peppers, these are a good way to test someone’s limit to extreme culinary delights. 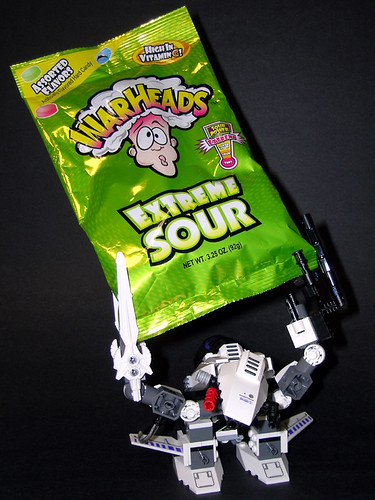 17). Freaking huge Unicorn Pops! First off, I don’t have a neat posed picture for this because no Legos outside of the life size Darth Vader at the Lego store can heft one of these pops. I first saw these at Disney World as a kid, along with the gargantuan regular circle lollipops and craved them throughout my childhood to no avail. I never got to eat a lollipop that was longer than my head. But I’m an adult now and damn it, I’ll eat one if I want to. I bought two, one for me and one for Kevin (I don’t think I’m the kind of comfortable that I can suck a lollipop with a friend…) and we chowed down on them while we watched The Last Unicorn and Water Ship Down. I must say that I was very disappointed. If I could pick one hard candy flavor to never ever have again in my entire life it would be tutti frutti, which is Satan’s gift to fruit flavors. It’s sort of cherry sort of any-fruit and it’s just plain nasty to me, and I’ll tell you, makes eating a foot-long lollipop mighty difficult. At least I finally got one and now if I ever go back to Disney I will only feel pity for the kid stuck eating one instead of green eyed jealousy. 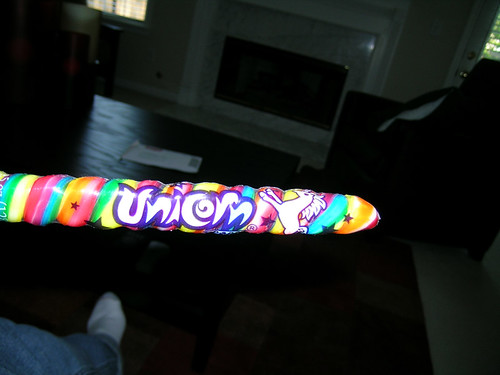 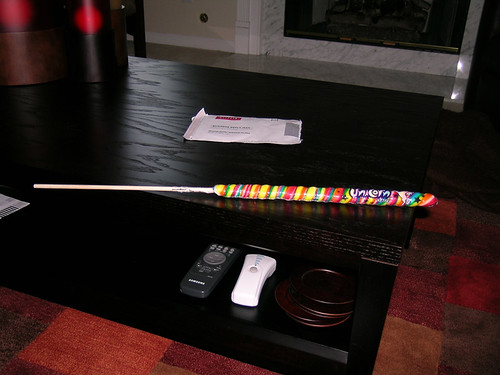 18). My last candy entry isn’t technically a candy, but I was deprived of it as a kid because my parents saw it as one, Kool-Aid! The only powdered drink I was allowed to have was Tang, because you know, the astronauts drank it and we did live near Cape Canaveral. I so wanted Kool-Aid and would covet it at friend’s houses every time it was served. There just seemed to be so many flavor combinations and possibilities, not to mention the violent wall crushing commercials that would air ten millions times as I sat to watch cartoons every Saturday and weekday afternoon. I sort of OD’ed on the stuff when I first moved out from home, but have picked up a taste for it again recently. I’ll tell you what, my friend Kevin makes a mean pitcher of Kool-Aid too. 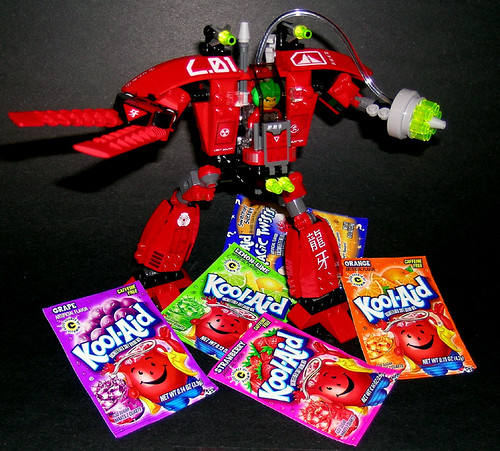 The one candy that I wasn’t able to track down because it’s no longer being made is Bonkers. I used to love Bonkers because it was like gum that you were allowed to swallow and I just remember it having the perfect commercial taffy consistency. It was also the first candy to do the flavor within a flavor, where there would be like strawberry wrapped in a banana covering. It was also the only fruity candy that also came in a chocolate variety (outside of fruity Tootsie Roll varieties that you used to only be able to find around Halloween.)

The other small thing I’ve done with this candy-consuming feast is to bring in another candy nostalgia memory, selling candy at school. One of my last great childhood candy memories was selling Atomic Fireballs in middle school. I was pretty industrious and got together with two other kids to form a candy selling alliance. We only sold Atomic Fireballs because they had the best markup since you could by them by the pound and they were individually wrapped. We’d sell ’em for a quarter a piece and then at the end of the week the three of us would pool the money and split it evenly. The one thing I always wanted to do was to branch out and sell all kinds of stuff. I saw this one high school kid do it once and he used a tackle box to show his wares. I was smitten with that idea.

Well because I’m frickin’ 29 and I’m not in college and it would just be creepy to show up at a local middle school, I can’t very well sell candy. But I can go out and buy a tackle box to store all this candy until it’s time to eat it, and that’s exactly what I did (well sort of, I bought a toolbox since the tackle boxes at the local target were all shaped like fish and I though that was kind of lame.) I keep all of the gums on the top removable shelf… 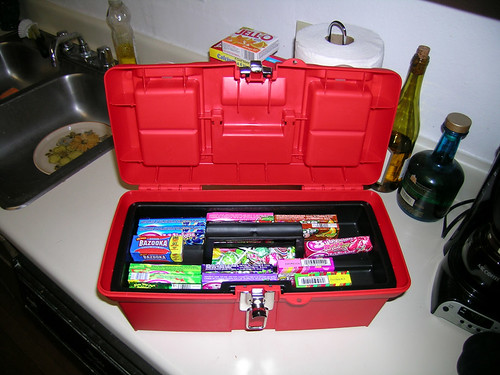 …and all of the other stuff piled underneath. 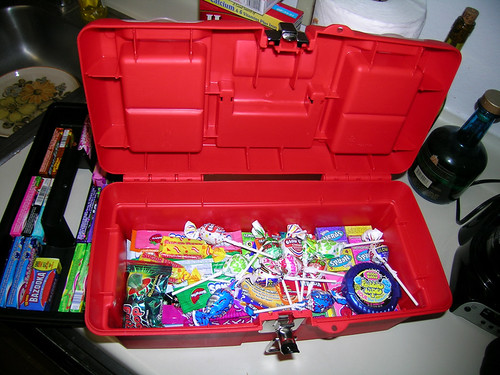 So thus ends my big ‘ol list of nostalgia candy. I hope I don’t get cavities ‘casue of this.