So as promised, here is the next thrilling chapter in the textbook that should be a part of the curriculum of Frozen Drinks 101 (to be offered at any self respecting community college near you.)

Today’s review: Quick Trip Freezoni’s. I’m not sure how far reaching QT’s are, and I’m too lazy right now to look it up on their website, but suffice it to say, they are the most popular gas mega-station in the metro Atlanta area. Sure we have Shell’s, Texaco’s, BP’s, Citgo’s, Chevron’s, and the occasional Circle K, but QT’s are the only 16-24 pump stations with a nice large (and clean) convenience store as well. They’ve always been the gas station convenience store of choice, if not just for their selection than for their mega-awesome fountain drink station. They always have both Pepsi and Coke products on tap, and there are usually about 20 to choose from. They also specialize in the Double Quart fountain drink at a measly $0.99. Can you drink 2 quarts of soda in a sitting? Probably not, but it’s handy to have around during late night role-playing sessions, or for those not often enough Godzilla marathons on the Sci-Fi channel.

Well about a year and a half ago QT decided to get into the frozen drink business with their own concoction called the Freezoni. It’s available in 4 to 6 flavors, depending on the setup, ranging from Orange Cream and Sour Apple to a suspiciously basic Cola. They also offer the innocuous White Cherry, which is typically both bland in color and flavor. 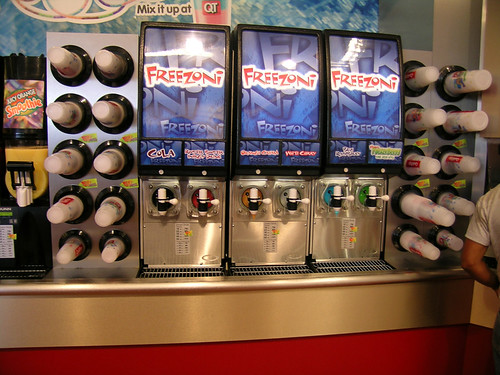 I was pretty excited about this new direction in refreshment opportunity as I have QT’s within a mile of both work and home. Unfortunately, and once again because I was weaned on the 7-11 Slurpee, these Freezoni’s just don’t cut the mustard. For the sake of this review and my own taste buds, I decided to go with the only flavor that’s even partially drink-able, Blue Raspberry. Now I’ve tried all the flavors and all of them are hideous. I’m not talking bland or kind of bad, I’m talking impossible to keep down.

First off, the general consistency of the drink is like too dry oatmeal. The syrup to ice ratio leans heavily towards the syrup, so much so that it’s like drinking honey. There is so much, well flavor for lack of a better term, that it actually hurts a little so swallow it. Second, the flavor is so intense that there is an aftertaste for hours, most likely because it coats your throat like cough syrup and takes that long to clear. My frozen drink shouldn’t be this combative, though because of this “thickness” it does form a pretty nice firm head. 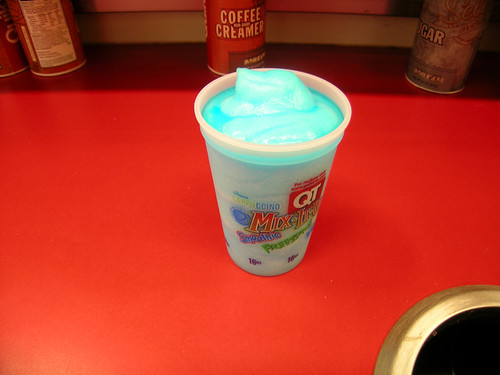 What I’ve found is that you have to cut the consistency and flavor with something much crisper and well wet. When I’m in the mood for seriously intense frozen drink flavor and I feel brave enough to attempt a Freezoni, I’ve found that the best way to get through one is by mixing it in a 50 to 50 ratio with either Sprite or Mountain Dew from the tap. The Freezoni acts as the ice in a normal fountain drink and the soda cuts though the “so sweet it’s bitter” flavor. Here’s an example of what that looks like: 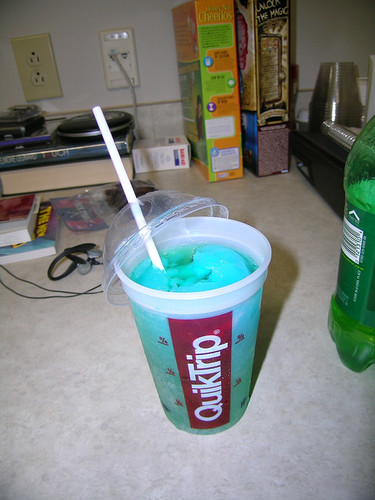 Though that may not seem appetizing, it’s they only way it’s drink-able. At the end of the day I’m not sure it’s worth it for your basic adult who just wants a good frozen drink. For kids though, it’s a whole ‘nother story. When I went to the machine to get the pictures and a sample, there was a guy with four kids all screaming and clamoring for the damn things. So much so that it took twenty minutes to get my drink and pictures in peace. It just so happens that on this day the Cola flavor was on defrost and this seriously pissed off one of the kids who was like on this mission to get one a day for the whole summer or something, I couldn’t get the entire story over the din of his whining. But then again, kids have a tendency to go towards stuff that the typical adult doesn’t have the time or patience for. When I was young candy couldn’t be too sour or sweet. I remember when the liquid lollipops in the toothpaste like packaging came out and I would suckle off that for hours even though it was just about the same consistency as the Freezoni’s above.

Anyway, this unfortunately seems to be yet another bad frozen drink review. Trust, me though, keep attending this class and you will eventually see something positive, like maybe next time when I hit the next gas mega-station entry the Racetrack Frozen Drinks. Till then, do you homework and if you live by a 7-11, drink a Slurpee for me.

Now this is a film about Garbage Pail Kids!!!