So here’s another exciting chapter in the book of Frozen Drinks 101. Today I’m going to review the second leap in frozen drink technology I encountered when I moved to Georgia, the Burger King Frozen Coke and Frozen Fanta Cherry (formerly Frozen Minute Maid Cherry.) If you’ll remember last time I reviewed the less than stellar Slush Puppie.

I was pretty excited when Burger King added their frozen sodas to their menu because from all appearances it was built on the same foundation (or at least a similar lot) as the 7-11 Slurpee, the king of frozen drinks in my humble opinion and the one by which all others are judged.

When I first tired one, I was a little bit disappointed. Whereas it was much more like a Slurpee, there was something that just wasn’t right. It was too light and air-y. It almost seemed kind of watered down. Though I haven’t started my own lexicon for frozen drink conditions, I’ll take this opportunity to borrow from an already established one and say that they seemed to be Foamees. Though since they were also weak and since I’m not sure if this has a term I guess I’d also have to call them Jipees, which is the condition of being jipped on syrup.

I tried the other flavor at the time, the more classic Cherry but I didn’t like it too much because it tasted a bit too much like cough syrup, which was how a lot of the Minute Maid brand sodas seemed to taste to me.

Well for this new review I hoped that maybe BK had changed their formula, as its been awhile since I’d been to one. The fiancee and I both picked up a basic medium Frozen Coke (that’s the BK large equivalent, which just brings up another gripe I have with the various names of drink sizes that’s for another time.) 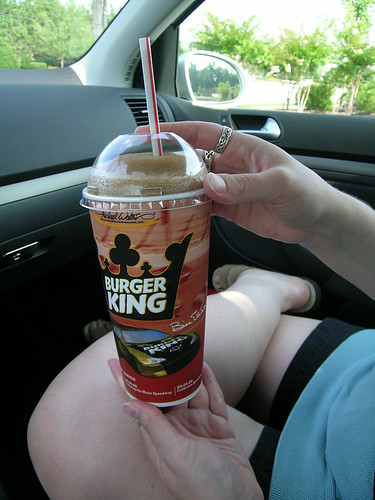 Though I still like it a hell of a lot better than a Slush Puppie, it sadly hasn’t changed much in the last 7 or so years. It’s still light and sort of watered down. 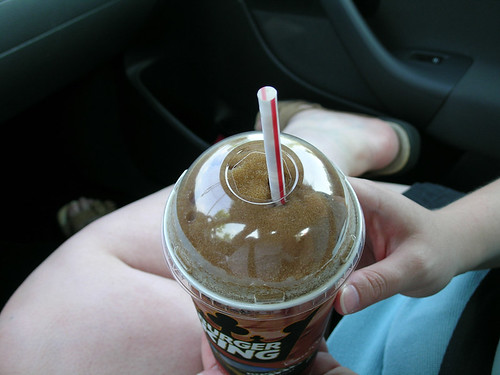 This one in particular developed a nasty case of the Chunkees, which is to say that there were large air pockets in the dink that cause you to have to reposition your straw a number of times to get it in a better position. 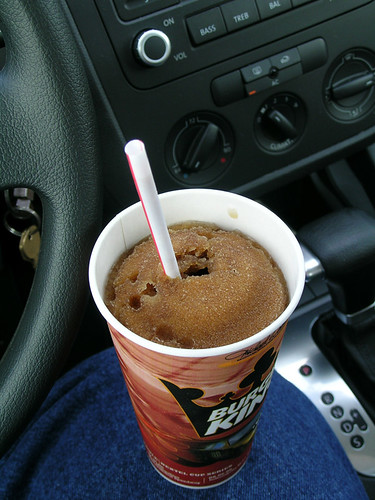 On a separate occasion when I didn’t have my camera handy I tried the new equivalent of the Cherry flavor, which is now under the Fanta brand. I was really disappointed in this one because not only does it suffer from the basic physical problems of the BK frozen Coke, but it’s also the weakest tasting Cherry I’ve ever tasted. It was like the crystal light version of crystal light or something.

Anyway, stay tuned for the next installment of this education series when I discuss the Quick Trip version of a slushie.

Are you a Maniac?