So a couple weeks ago, my friend Kevin, my fiancee Carrie and I went out on the town to eat, but since we had nostalgia in mind, we far from did it up right and opted for a trip to Pizza Hut. We decided to “dine in” as that’s what we did most as kids before the hellstorm that is Pizza Delivery really gathered much steam.

I brought along my trusty digital camera to document the trip back into memory (man that’s hokey.) I took a bunch of pictures of us stuffing our faces in a less than fine dining establishment and here is my review. 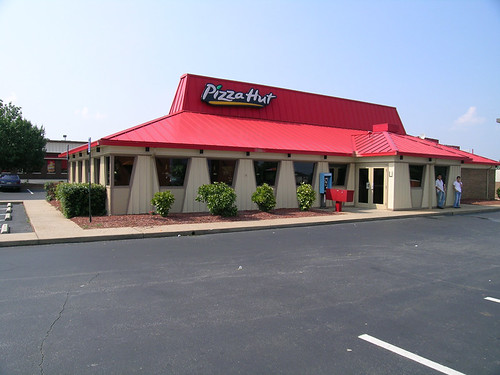 First off, part of what prompted the decision to eat at Pizza Hut was that we still have a dine-in version right down the street from us. From what I gather most large chain pizza places are pretty much carryout and delivery only now and the mom and pop joints are few and far between where I live. I was hoping that the inside of this Pizza Hut looked like it did when we were kids, and I think it pretty much does. 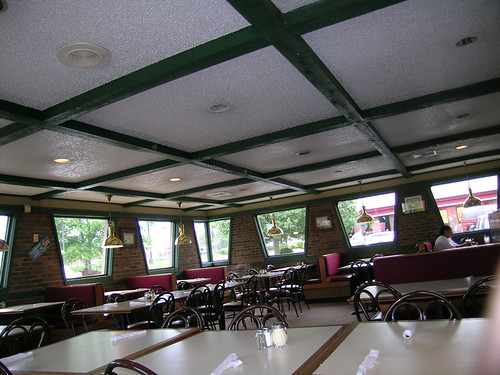 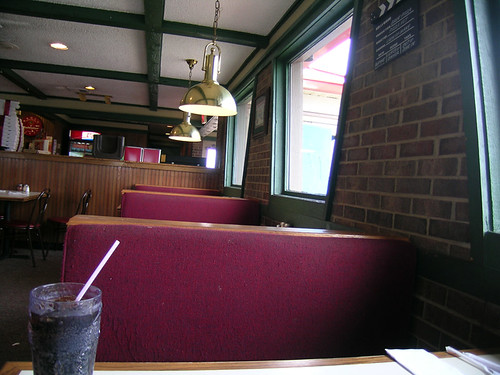 We knew we wanted Personal Pan Pizzas, because that’s again, what we had as kids, but we weren’t sure how big those were and if it was going to be enough to fill out hearty appetites, so we opted for some appetizers. We ended up over compensating and ordered way too much, two orders of fried cheese sticks and two orders of cheesy breadsticks ontop of each of us getting our own Personal Pan Pizza. A crazy amount of food by anyone’s standards. 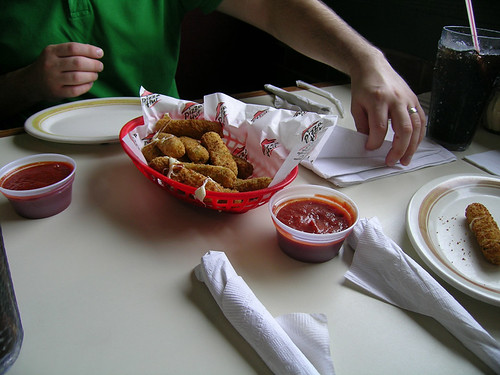 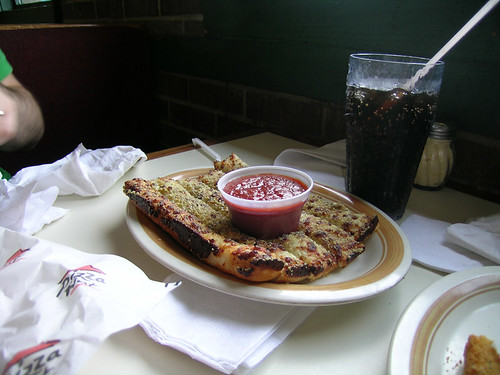 The first thing I’d like to say about dining in at Pizza Hut was that we won the lottery in terms of fast food waitresses. Ours was awesome, nice and didn’t bat an eye while I took pictures and acted all the fool. She was also super attentive, though we were like one of two parties there, so there probably wasn’t much else to do.

The second thing I’d like to state for the record is that going into this meal I was going to be a hard sell. See I hate Pizza Hut. I just don’t think they make good pizza and I had my fare share of it growing up. I’m just not a fan of thick bread-y pizza and I hate the way the bottom of the crust is like this grease sponge that’s all orange and disgusting.

Well the appetizers were awesome, and freaking filling I might add, which went a long way to putting me in a better “accepting the pizza” mood for the rest of the meal. 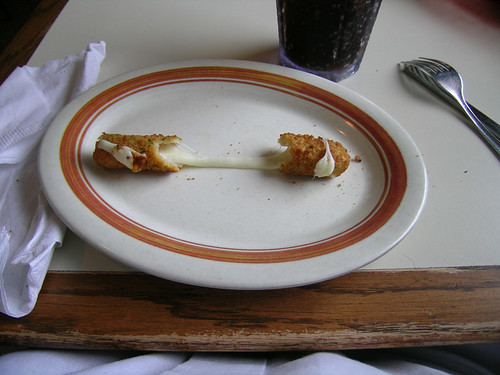 It also didn’t hurt that they had Wild Cherry Pepsi on tap, which is the first time I’ve ever seen this. I typically can only find it in the 20oz variety in gas stations here, so that was cool. 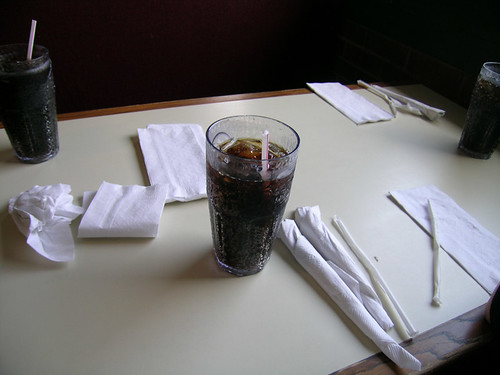 Our pizzas arrived sans pans, which bummed me out a little, but I was honestly just glad they still had that variety of pizza at all. I decided on a basic Pepperoni Lovers, while Carrie opted for a Veggie sampler, and Kevin decided to go for the Supreme. 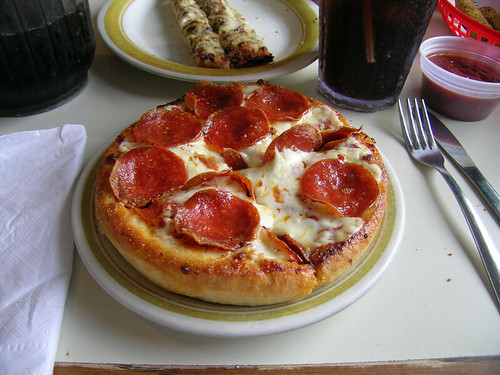 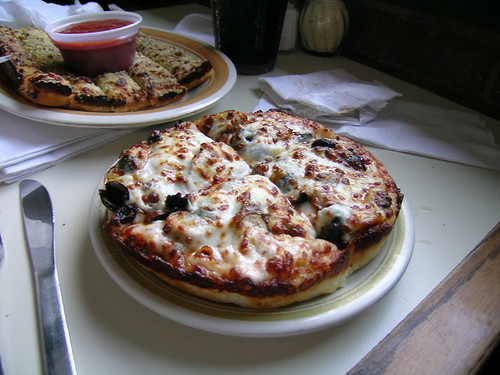 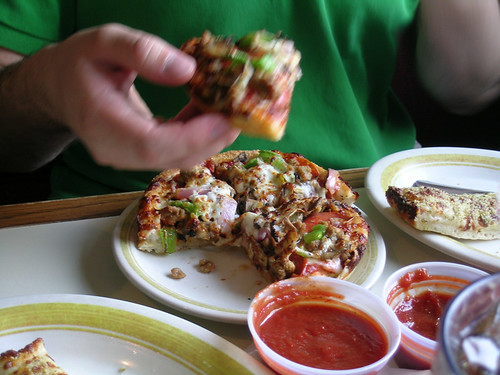 I must say that I was really impressed with the quality of the food. I didn’t go gaga over the pizza as the thick crust is still not my personal favorite, but it was piping hot and pretty darn good for what I remember it being like. It probably helps a lot that we ate in, because I suspect that if it were allowed to cool down, like say in a trip from the pizza joint to your house or apartment, it wouldn’t be nearly as good. The Personal Pizzas turned out to be smaller than we remembered, but just the right size for what we wanted.

I was surprised that we had so much food leftover, but my gut was about to burst and I think everyone else was the same. 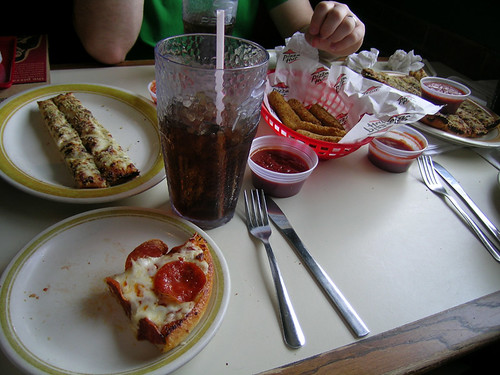 The topper of the evening? This particular Pizza Hut had an original (I’m assuming, it looked about 20 years old) Galaga arcade machine. So I popped a couple quarters in and actually ended up playing far longer than I expected, making our little party wait for me to be killed. The only thing that would have made this evening perfect would have been if they had one of the sit down table Pac-Man arcade games that I remember them having as a kid. 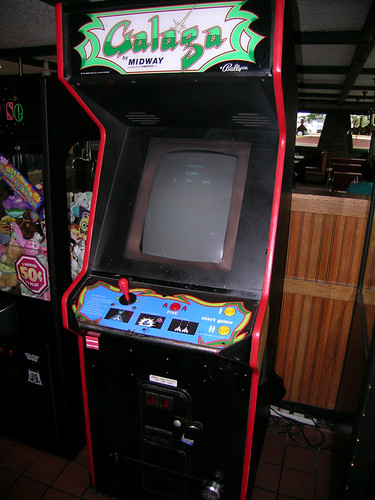 All in all I’d have to say this was one fine dining experience, and if you haven’t eaten at a Pizza Hut in ages, I suggest dining in, it makes a world of difference.