So I’ve been thinking a lot about Slurpees lately, or more accurately the lack of Slurpees in Georgia. I figured it’d be fun to cruise around to the various gas stations and fast food places to do small articles on the state of the frozen drink availability in rednecksville GA, so today the fiancée and I tooled around the city looking for Slush Puppies.

When I first moved to Georgia I was in serious Slurpee withdrawal as we’d already been 9 months removed from Florida and there were no 7-11’s in New Hampshire. I was hoping, since we were trekking down south again, that there would be a 7-11 somewhere, but no luck.

The first drink I came into contact with that was even close to a Slurpee was a Slush Puppie, but I was wary of the concoction because instead of simple pumping out the frozen bliss into a cup you had to combine the ice/liquid mixture with the flavoring syrup yourself. I had good reason to be wary too because when I finally got one I messed up the ratio of icy liquid to syrup and made one of the nastiest drinks ever. It was beyond sour to a point where it hurts to pucker your lips any further, and no amount of sugar packets swiped from the coffee section would sweeten it. As I’ve said before, I’m not the brightest boy and it took me a bit to realize that there were cryptic instructions on the cup that you mixed the drink in. Each cup had a “paw points�? number on it that was the number of syrup squirts you were supposed to add. This isn’t explained; at least it wasn’t on the machine I came into contact with.

The next ones were better, but it was never in the league of a Slurpee and here’s why: 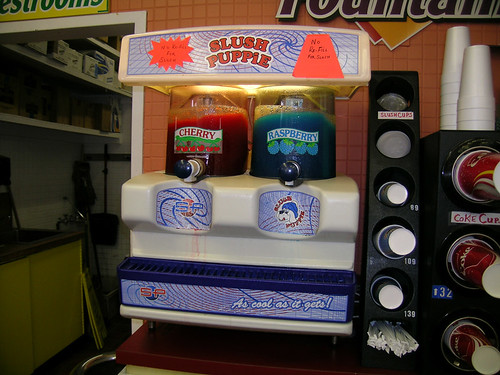 The above picture is of one of the newer Slush Puppie machines that took us the better part of an evening to find (it was the 4th gas station we tried and the second Chevron). In the new format, you no longer do the drink mixing yourself. I assume some kid died from adding too much syrup and the company had to rethink their strategy. 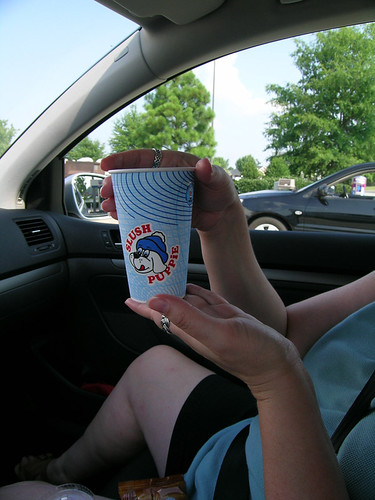 So since I’ve never had a great love of the drink I picked up a small to try for old time’s sake. You can see the trademark Slush Puppie on the cup. 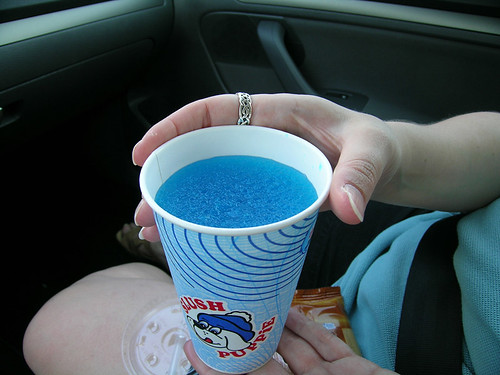 I chose the Blue Raspberry flavor purely because I liked the bluish tint to the drink and in the end it really didn’t matter because I don’t care for them. See the drink is made up of a very liquid-y mixture of sugar water and large (think sesame seed like in size) ice crystals with a sour syrup flavoring to add color and well flavor. To me this is just too wet for a frozen drink and because of this you can easily suck out all of the syrup and sugar water in like three sips. Every Slush Puppie ever has ended its poor excuse for a life as a giant chunk of flavorless ice that’s tossed into the nearest trashcan. The only way to sidestep this phenomenon is by drinking it without a lid. This can be very dangerous.

Before today the last time I had a Slush Puppie was about 7 years ago. I was particularly craving a frozen cherry drink and decided to drive 15 miles out of my way to get one from one of the last remaining Amaco gas stations in our area. I got the drink and made my way to Blockbuster to return a video. I was waiting at a red light sipping my drink sans lid for the full Slush Puppie experience when I was rear ended by a girl applying make-up in her car because she was late to work. Upon impact the entire contents of the drink exploded onto my windshield and dash scarring the bejesus out of both the girl who hit me and the guy infront of me that she knocked me into. When I stepped out of the car dripping with red Slush Puppie, they thought I was going to die.

So what’s the moral of the story kids? Leave the damn lid on and even though the drink will suffer, it’ll be less of a hassle to clean your car in the event of an accident.

Next time I’ll review the next frozen drink on my list, the Burger King Frozen Coke.

Branded in the 80s Podcast – A Silverhawks Story