Here is my review of Long John Silvers, an eating establishment that my family frequented in the 80’s. 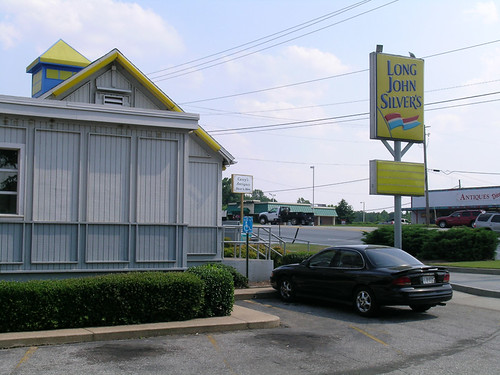 So here we are at the wonderfully bright and clean…okay the downtrodden, depressing and dingy downtown Lawrenceville Long John Silvers, the only one within comfortable driving distance. 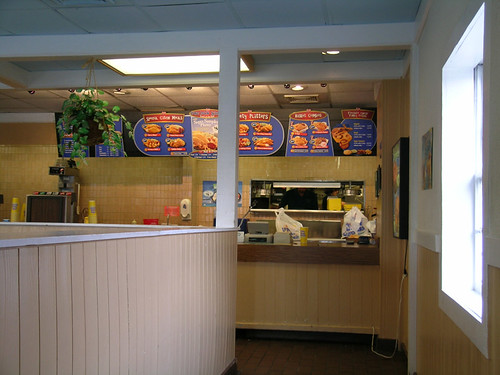 Upon entering this fine establishment you are immediately herded toward the counter of ultimate batter-dipped decision delight. Choose your heart attack from either 5 combo meals, 4 dinners, 6 baskets, or for the truly brave, 2 different sizes of family meals. 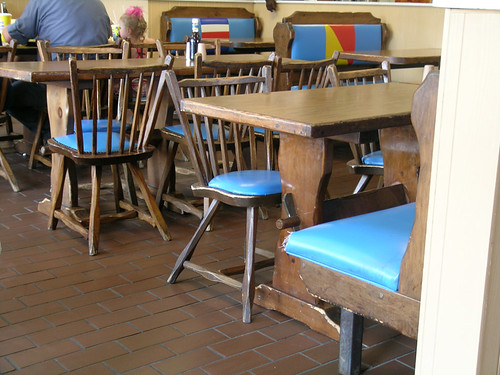 After placing your order and receiving your drinks, you must now sit yourself in one of two areas of fine dining and comfort. Unfortunately there was only one area open and it was squalid, containing the same furniture that the place was most likely opened with in the 70’s. 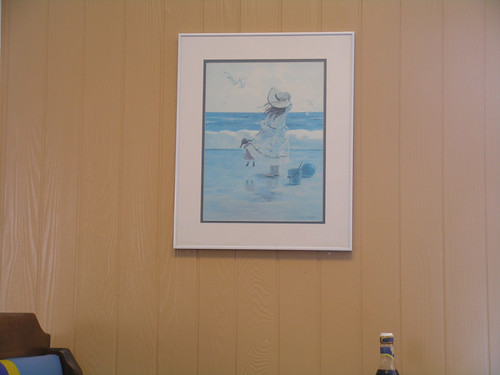 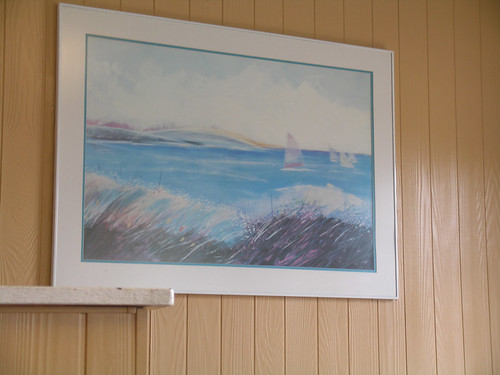 As you wait for the server to bring your meal of fat and fish you can cast a gaze around the establishment at their many pieces of fine ambience and art, including two paintings so sun faded that they are just light blue now. 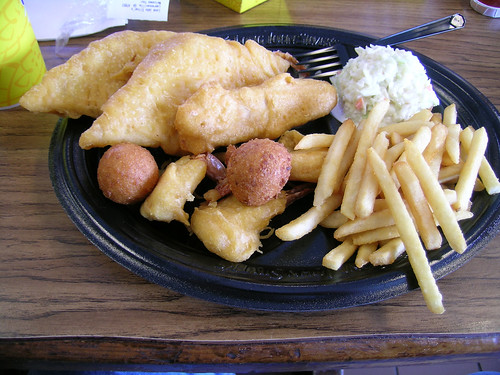 Just as you are about to burst with anticipation a 16 year-old counter jockey with a stare that can only mean he’s contemplating suicide will bring out your meal. I opted for the #10, the Seafood Feast with fish, chicken, shrimp, and sides of slaw, French fries, and hush puppies.

My girlfriend opted for a two piece fish basket and a side of the New Veggie Bites (which are actually just jalapeño poppers.) 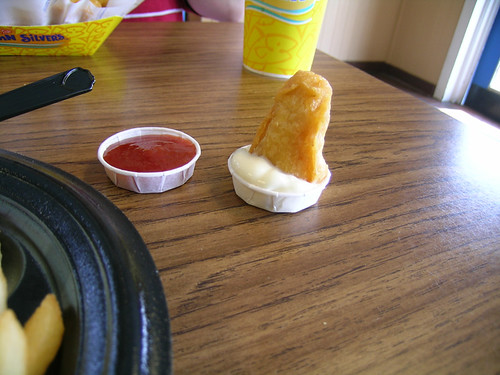 I tackled the single chicken plank first. Now I don’t know how they do it, but the fried batter covering was piping hot while the chicken inside was merely lukewarm. It was a little dry too, so I ended up drowning it in tartar sauce just to take the edge off. Plus I love freaking LJS tartar sauce. 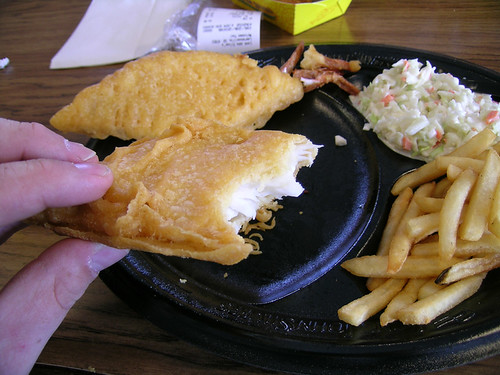 Next came the shrimp, not bad but how do you screw up batter fried shrimp, and the fish. Now I grew up on this fish and once upon a time in Florida is was the best fish ever. Now it’s revealed its true self to me. It’s just unidentified flaky triangular white fish and it’s just not that good. Without the golden, salty, batter exterior I simply wouldn’t take the time to eat it. No sauce needed though, as it’s moist as all get out. 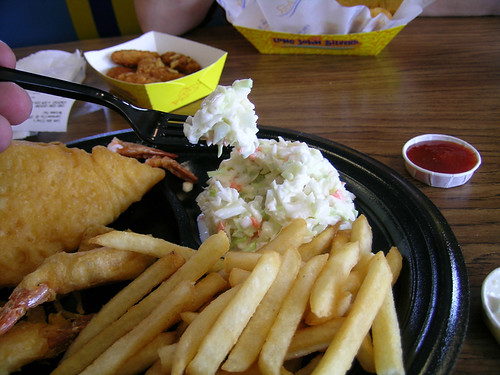 Next I started tackling the sides, or as the above picture will show me lying, I was mixing it up as I went, but for the sake of this review I waited for the sides. The slaw was first and it was pretty damn good slaw-wise. I’ll be honest, I’m not a big slaw fan, it’s milky and cabbage-y and I just don’t bend that way mostly, but I did grow up on LJS and I developed a taste for theirs and it’s just the exact same as I remembered it. The fries sucked monkey balls though. They are the worst fries ever, all plain and not salty and sort of stale. The hush puppies though were fan-freaking-tastic as LJS hush puppies tend to always be. Just enough batter goodness without too much onion. 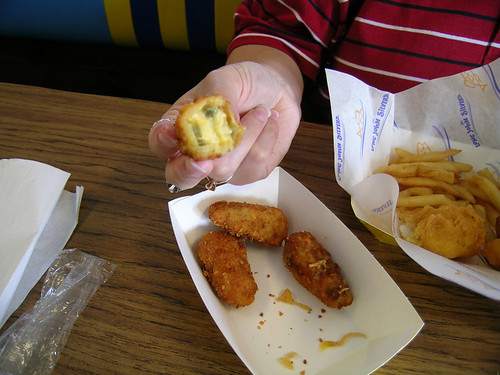 The girlfriend was getting a tummy ache, but like the trooper she is she powered through her meal to the almost bitter end. Her assessment of the Veggie Bites was that they were good, but not as good as store-bought jalapeño bites simply because instead of one solid piece of pepper LJS decided to dice theirs which sort of made it, well, not as good. What made me laugh was the sign for the Bites promotion that proclaimed “Eat Your Veggies!” when in fact they are mostly batter and cheese, and let’s be honest, jalapeños aren’t really veggies in the healthy sense of the word. 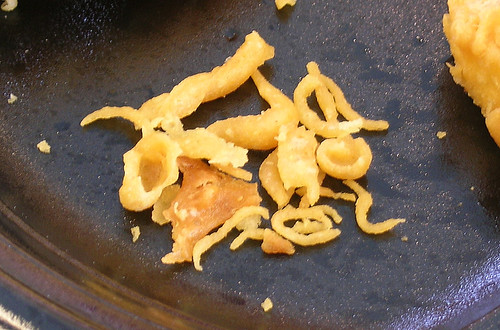 Having each made our way through most of the meal (I stopped shoveling in slaw when I got a mouthful of hidden slaw-soggy French fry) we made our way to the best part of any LJS meal and something I was totally obsessed with as a kid, the crumbs. I apologize for the picture quality, apparently it’s impossible to get a clear light reading or distance reading off of LJS crumbs, and they will always turn out blurry as all four pictures that I took did. When I was a kid I would always order a free basket of “extra crumbs” which the server never batted an eye at, so apparently I wasn’t the only one begging for what amounts to LJS scrapings. 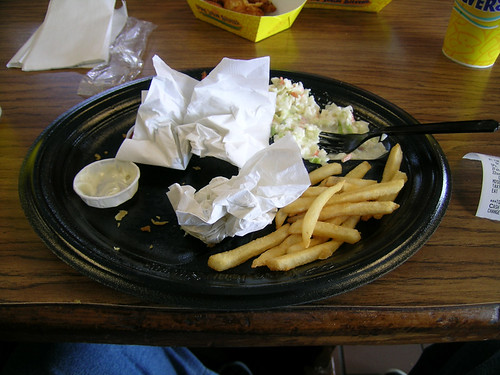 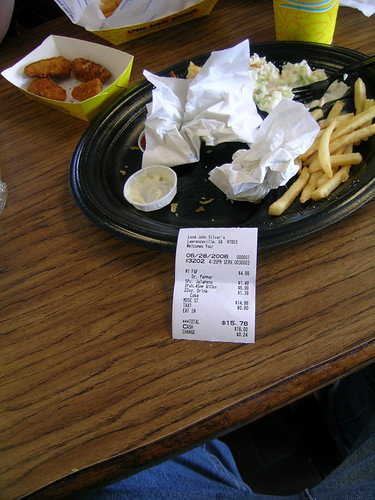 …and then we contemplated the freaking bill. $15.76 for that! Man, this should be like McDonalds prices. We should be able to walk out of a LJS only $8 lighter than when we walked in, but $16!?! There was a family of 6 eating a table away from us that must have spent upwards of $50 at LJS, and that is crazy. Also, not to pick on that family, but the grandmother was hooked up to an oxygen tank, with full on wires tubes and everything, and she was chowing down on batter-fried greasy fish and that’s just wrong. 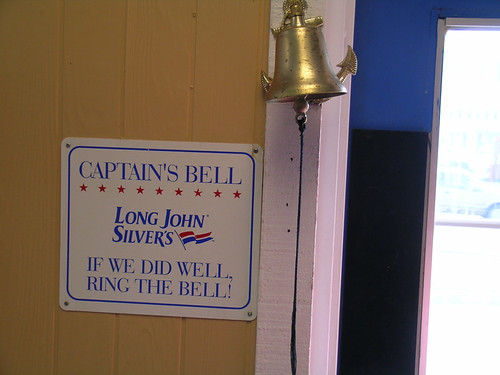 Though the family of 6 before us gave this a healthy tug, needless to say we did not ring the bell of ultimate happiness. 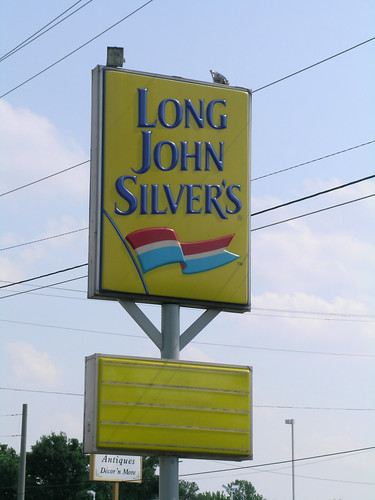 It’s sad to say, but I believe between the price, the attack of the ninja-like soggy French fry, and tummy aches abounding, this is probably my last visit to Long John Silvers for the foreseeable future. I didn’t eat there all the time as a kid, but we did eat it often enough that when I moved to Georgia and I couldn’t find one I was sad and craved it for years to come. But maybe some things need to be relegated to that black hole of memory that is nostalgia.

Mad Scientists Get No Respect…